The general scientific approach has three fundamental features (Stanovich, 2010). The first is systematic empiricism. Empiricism refers to learning based on observation, and scientists learn about the natural world systematically, by carefully planning, making, recording, and analyzing observations of it. The second feature of the scientific approach is that it is concerned with empirical questions. These are questions about the way the world actually is and, therefore, can be answered by systematically observing it. The third feature is that it creates public knowledge. After asking empirical questions, making observations and drawing their conclusions, scientists publish their work. This usually means writing an article for publication in a professional journal, in which they put their research question in the context of previous research, describe in detail the methods they used to answer their question, and clearly present their results and conclusions. Publication is an essential feature of science for two reasons. One is that science is a social process—a large-scale collaboration among many researchers distributed across both time and space. Our current scientific knowledge of most topics is based on many different studies conducted by many different researchers who have shared their work with each other over the years. The second is that publication allows science to be self-correcting. Individual scientists understand that despite their best efforts, their methods can be flawed, and their conclusions incorrect. Publication allows others in the scientific community to detect and correct these errors so that, over time, scientific knowledge increasingly reflects the way the world actually is. 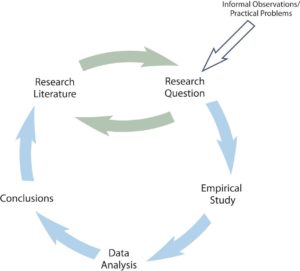 Video 2.2.1. The Scientific Method explains the basic steps taken for most scientific inquiry.