Motivation describes the wants or needs that direct behavior toward a goal, but, why do we do the things we do? What motivations underlie our behaviors? Is motivation an inherited trait or is motivation influenced by reinforcement and consequences that strengthen some behaviors and weaken others? Is the key to motivating learners a lesson plan that captures their interest and attention? In other words, is motivation something innate that we are born with that can be strengthened by reinforcers external to the learning task, or is it something interwoven with the learning process itself?

Some motives are biological, like our need for food or water. However, the motives that we will be more interested in are more psychological. In general, we discuss motivation as being intrinsic (arising from internal factors) or extrinsic (arising from external factors). Intrinsically motivated behaviors are performed because of the sense of personal satisfaction that they bring, while extrinsically motivated behaviors are performed in order to receive something from others. 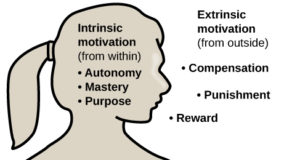 Video 6.1.1. Extrinsic vs Intrinsic Motivation explains the difference and provides examples of these types of motivation.

Think about why you are currently in college. Are you here because you enjoy learning and want to pursue an education to make yourself a more well-rounded individual? If so, then you are intrinsically motivated. However, if you are here because you want to get a college degree to make yourself more marketable for a high-paying career or to satisfy the demands of your parents, then your motivation is more extrinsic in nature.

In reality, our motivations are often a mix of both intrinsic and extrinsic factors, but the nature of the mix of these factors might change over time (often in ways that seem counter-intuitive). There is an old adage: “Choose a job that you love, and you will never have to work a day in your life,” meaning that if you enjoy your occupation, work doesn’t seem like . . . well, work. Some research suggests that this isn’t necessarily the case (Daniel & Esser, 1980; Deci, 1972; Deci, Koestner, & Ryan, 1999). According to this research, receiving some sort of extrinsic reinforcement (i.e., getting paid) for engaging in behaviors that we enjoy leads to those behaviors being thought of as work no longer providing that same enjoyment. As a result, we might spend less time engaging in these reclassified behaviors in the absence of any extrinsic reinforcement. For example, Odessa loves baking, so in her free time, she bakes for fun. Oftentimes, after stocking shelves at her grocery store job, she often whips up pastries in the evenings because she enjoys baking. When a coworker in the store’s bakery department leaves his job, Odessa applies for his position and gets transferred to the bakery department. Although she enjoys what she does in her new job, after a few months, she no longer has much desire to concoct tasty treats in her free time. Baking has become work in a way that changes her motivation to do it. What Odessa has experienced is called the overjustification effect—intrinsic motivation is diminished when extrinsic motivation is given. This can lead to extinguishing the intrinsic motivation and creating a dependence on extrinsic rewards for continued performance (Deci et al., 1999).

In addition, culture may influence motivation. For example, in collectivistic cultures, it is common to do things for your family members because the emphasis is on the group and what is best for the entire group, rather than what is best for any one individual (Nisbett, Peng, Choi, & Norenzayan, 2001). This focus on others provides a broader perspective that takes into account both situational and cultural influences on behavior; thus, a more nuanced explanation of the causes of others’ behavior becomes more likely. (You will learn more about collectivistic and individualistic cultures when you learn about social psychology.)

In educational settings, students are more likely to experience intrinsic motivation to learn when they feel a sense of belonging and respect in the classroom. This internalization can be enhanced if the evaluative aspects of the classroom are de-emphasized and if students feel that they exercise some control over the learning environment. Furthermore, providing students with activities that are challenging, yet doable, along with a rationale for engaging in various learning activities can enhance intrinsic motivation for those tasks (Niemiec & Ryan, 2009). Consider Hakim, a first-year law student with two courses this semester: Family Law and Criminal Law. The Family Law professor has a rather intimidating classroom: He likes to put students on the spot with tough questions, which often leaves students feeling belittled or embarrassed. Grades are based exclusively on quizzes and exams, and the instructor posts results of each test on the classroom door. In contrast, the Criminal Law professor facilitates classroom discussions and respectful debates in small groups. The majority of the course grade is not exam-based, but centers on a student-designed research project on a crime issue of the student’s choice. Research suggests that Hakim will be less intrinsically motivated in his Family Law course, where students are intimidated in the classroom setting, and there is an emphasis on teacher-driven evaluations. Hakim is likely to experience a higher level of intrinsic motivation in his Criminal Law course, where the class setting encourages inclusive collaboration and a respect for ideas, and where students have more influence over their learning activities.

Schools often use concrete rewards to increase adaptive behaviors. How might this be a disadvantage for students intrinsically motivated to learn? What are the educational implications of the potential for concrete rewards to diminish intrinsic motivation for a given task?

Show Answer
We would expect to see a shift from learning for the sake of learning to learn to earn some reward. This would undermine the foundation upon which traditional institutions of higher education are built. For a student motivated by extrinsic rewards, dependence on those may pose issues later in life (post-school) when there are not typically extrinsic rewards for learning.

Like motivation itself, theories of it are full of diversity. For convenience in navigating through the diversity, we have organized the theories around two perspectives about motion. The first set of theories focuses on the innateness of motivation. These theories emphasize instinctual or inborn needs and drives that influence our behavior. The second set of theories propose cognition as the source of motivation. Individual motivation is influenced by thoughts, beliefs, and values. The variation in these theories is due to disagreement about which cognitive factors are essential to motivation and how those cognitive factors might be influenced by the environment.

First, we will describe some early motivational theories that focus on innate needs and drives. Not all of these theories apply to the classroom, but learning about them will show you how different theorists have approached the issue of motivation. You are sure to find some elements of your own thinking about motivation in each of them. We will examine instinct theory, drive theory, and arousal theory as early explanations of motivation. We will also discuss the behavioral perspective on motivation and the deficiency-growth perspective, as exemplified by Maslow’s hierarchy of needs.

Video 6.1.2. Instincts, Arousal, Needs, Drives provides a brief overview of some of the major motivational theories.