In our previous example, we discussed some familiar spaces that we encounter in our everyday lives. The purpose of these places isn’t difficult to understand, and we can see that we often use simple processes of analysis and inference to make our way through these places and to achieve our goals. Now we want to move beyond these basic examples and into a more complex set of ideas.

In the example that follows, the author is exploring America’s sense of its own history and identity. As the piece progresses, we can see that it is built on the scholarly processes of analysis, inference, and synthesis, as well as on more accessible first steps such as summary and factual description.

To complete the next step in this writing workshop, you’ll need to have your working document open so you can take notes and answer a few brief questions that are embedded in the text. Look for the discussion boxes that follow key sections of the essay for suggestions on how those passages can help you better understand analysis, inference, and synthesis.

As you read the essay, jot down some notes in your working document, paying particularly close attention to places where the author is breaking down some idea or concept, implying a position without directly stating it, or combining different elements of an idea in an interesting way. Be sure also to note the evidence that is being cited by the author as well as the evidence you are using to reach your own interpretations of the piece’s arguments.

When you’ve finished reading, we’ll work through a quick review of how other students might or might not have understood how analysis, inference, and synthesis operate in the piece. Then we’ll finish this workshop with a final short writing exercise. 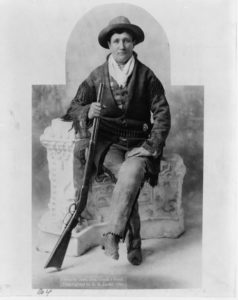 Figure 1. American frontierswoman and professional scout Martha Jane Canary was better known to America as Calamity Jane. A figure in western folklore during her life and after, Calamity Jane was a central character in many of the increasingly popular novels and films that romanticized western life in the twentieth century. “[Martha Canary, 1852-1903, (“Calamity Jane”), full-length portrait, seated with rifle as General Crook’s scout],” c. 1895. Library of Congress.

“The American West” conjures visions of tipis, cabins, cowboys, Indians, farmwives in sunbonnets, and outlaws with six-shooters. Such images pervade American culture, but they are as old as the West itself: novels, rodeos, and Wild West shows mythologized the American West throughout the post-Civil War era.In the 1860s, Americans devoured dime novels that embellished the lives of real-life individuals such as Calamity Jane and Billy the Kid. Owen Wister’s novels, especially The Virginian, established the character of the cowboy as a gritty stoic with a rough exterior but the courage and heroism needed to rescue people from train robbers, Indians, or cattle rustlers. Such images were later reinforced when the emergence of rodeo added to popular conceptions of the American West. Rodeos began as small roping and riding contests among cowboys in towns near ranches or at camps at the end of the cattle trails. In Pecos, Texas, on July 4, 1883, cowboys from two ranches, the Hash Knife and the W Ranch, competed in roping and riding contests as a way to settle an argument and this is recognized by historians of the West as the first real rodeo. Casual contests evolved into planned celebrations. Many were scheduled around national holidays, such as Independence Day, or during traditional roundup times in the spring and fall. Early rodeos took place in open grassy areas—not arenas—and included calf and steer roping and rough stock events such as bronc riding. They gained popularity and soon dedicated rodeo circuits developed. Although about 90% of rodeo contestants were men, women helped to popularize the rodeo and several popular women bronc riders, such as Bertha Kaepernick, entered men’s events, until around 1916 when women’s competitive participation was curtailed.

In your working document, fill in the blanks for the following statements:

In the above paragraph, Brand is breaking down the visual and performative elements of the “cowboy” and “frontier woman” character. This process of identifying the different parts of a system (in this case a system of ideas) is called _________ .

Americans also experienced the “Wild West”—the mythical West imagined in so many dime novels—by attending traveling Wild West shows, arguably the unofficial national entertainment of the United States from the 1880s to the 1910s. Wildly popular across the country, the shows traveled throughout the eastern United States and even across Europe and showcased what was already a mythic frontier life. William Frederick “Buffalo Bill” Cody was the first to recognize the broad national appeal of the stock “characters” of the American West—cowboys, Indians, sharpshooters, cavalrymen, and rangers—and put them all together into a single massive traveling extravaganza. Operating out of Omaha, Nebraska, Buffalo Bill launched his touring show in 1883. Cody himself shunned the word “show,” fearing that it implied an exaggeration or misrepresentation of the West. He instead called his production “Buffalo Bill’s Wild West.” He employed real cowboys and Indians in his productions. But it was still, of course, a show. It was entertainment, little different in its broad outlines from contemporary theater. Storylines depicted westward migration, life on the Plains, and Indian attacks, all punctuated by “cowboy fun”: bucking broncos, roping cattle, and sharpshooting contests.

In the above paragraph, Brand is making a case for the popularity of these “Wild West” shows in the late 19th and early 20th centuries. In the highlighted sentence “Wildly popular across the country, the shows traveled throughout the eastern United States and even across Europe and showcased what was already a mythic frontier life”, the author is suggesting, without directly stating, that nostalgia for a “mythic” frontier culture that was beginning to fade away was one explanation for this popularity. 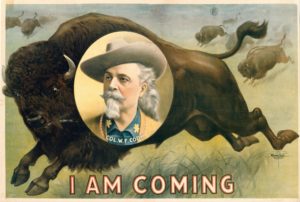 Buffalo Bill, joined by shrewd business partners skilled in marketing, turned his shows into a sensation. But he was not alone. Gordon William “Pawnee Bill” Lillie, another popular Wild West showman, got his start in 1886 when Cody employed him as an interpreter for Pawnee members of the show. Lillie went on to create his own production in 1888, “Pawnee Bill’s Historic Wild West.” He was Cody’s only real competitor in the business until 1908, when the two men combined their shows to create a new extravaganza, “Buffalo Bill’s Wild West and Pawnee Bill’s Great Far East” (most people called it the “Two Bills Show”). It was an unparalleled spectacle. The cast included American cowboys, Mexican vaqueros, Native Americans, Russian Cossacks, Japanese acrobats, and an Australian aboriginal.

In an attempt to appeal to women, Cody recruited Annie Oakley, a female sharpshooter who thrilled onlookers with her many stunts. Billed as “Little Sure Shot,” she shot apples off her poodle’s head and the ash from her husband’s cigar, clenched trustingly between his teeth. Gordon Lillie’s wife, May Manning Lillie, also became a skilled shot and performed as, “World’s Greatest Lady Horseback Shot.” Female sharpshooters were Wild West show staples. As many 80 toured the country at the shows’ peak. But if such acts challenged expected Victorian gender roles, female performers were typically careful to blunt criticism by maintaining their feminine identity—for example, by riding sidesaddle and wearing full skirts and corsets—during their acts.

In the above paragraph, Brand is explaining how gender roles might (or might not) be performed in a “Wild West” show, and why certain elements might have appealed to the audiences of the day. The final highlighted sentence “But if such acts challenged expected Victorian gender roles, female performers were typically careful to blunt criticism by maintaining their feminine identity—for example, by riding sidesaddle and wearing full skirts and corsets—during their acts “ is one you might cite in an essay draft of your own that addressed how gender roles operated in staged presentations of “Wild West” life.Let’s see if we can find more evidence to support such a discussion:

As you locate and cite these related passages, making connections between them and building up to a new arguable claim, you are demonstrating the scholarly move called _____________ .