Have you ever heard the term “Exhibit A?”

Here are some examples: In a movie review we read: “Nothing to Lose is Exhibit A in what’s right and what’s wrong with current Hollywood comedy.”[1]  A news article quotes a Senator as saying: “The massive data breach at Equifax Inc. is ‘exhibit A‘ on the need for strong U.S. regulation, including higher fines against companies that mishandle consumers’ personal information.”[2] An article about football claims that “Green Bay is Exhibit A in an NFL trend that emphasizes mesmerizing passing games above all else.”[3]

The term “Exhibit A” comes from courtroom trials. Wikipedia tells us that “an exhibit, in a criminal prosecution or a civil trial, is physical or documentary evidence brought before the jury. The artifact or document itself is presented for the jury’s inspection. […] The exhibits in any one law case are often labelled Exhibit A, Exhibit B, Exhibit C, etc. to distinguish between them.” (https://en.wikipedia.org/wiki/Exhibit_(legal))

In a trial, lawyers use “exhibits,” or evidence, to try to make their case to the jury. Evidence is extremely important in a jury trial: jurors are instructed that they should “base their conclusions [only] on the evidence as presented in the trial.” American Bar Association “How Courts Work” (https://www.americanbar.org/groups/public_education/resources/law_related_education_network/how_courts_work/juryinstruct/) 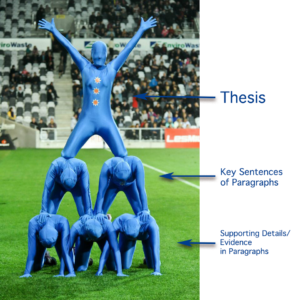 When writing an essay, you want to start with the evidence. Before brainstorming about the claim you’ll be arguing, you need to gather the evidence you have and think about how to fill in the gaps. Even a narrative essay telling a story is built on evidence. Were you ever given the writing advice “show, don’t tell?” Rather than telling the reader “I was scared,” you show the reader how scared you were: “my knees trembled, my voice shook, and my dry mouth tasted like aluminum.” In other words, these physical  effects are evidence of the emotion.

Evidence is what a writer uses to support or defend his or her argument, and only valid and credible evidence is enough to make an argument strong. What is valid or credible changes, however, according to the academic discipline.

Evidence in the Humanities: History

It is important to remember that evidence NEVER speaks for itself. Any evidence used to support a position must be explained – the author of the text must prove that the evidence supports his or her thesis.

Let’s practice moving from our initial questions to thinking about evidence.

Writing Workshop: What is Evidence?

Review the questions you created in the previous activity. Where would you look to find evidence to answer your defining questions and build an argument about school start times?

Step 1: Choose two of your questions from above.

Step 2: List three places you could look to find evidence that would help make a claim in answer to each question.

Note: for this assignment, you don’t need to actually track down the sources and evidence; you just need to note where you would find initial clues.

Question: “Would teenagers have fewer car accidents if they got more sleep?”