Properly positioning fire apparatus can be critical at a fire scene. In particular, placing aerial apparatus is critical for positioning of the aerial ladder or elevating platform, which is mounted on top of these vehicles (Figure 2.1). Pumper apparatus also need to get close enough to the building to facilitate hose line use. The location of other specialized apparatus, or small vehicles, such as chief’s cars or ambulances, should only be of particular concern to the designer of unusual facilities. For instance, a sports arena may need to be designed for entry of ambulances but not fire apparatus.

Many structures are situated on public streets that provide fire fighting access. Others, which are set back from public streets, have private fire apparatus access lanes or “fire lanes,” for short. These enable fire apparatus to approach the building and operate effectively (Figure 2.2). Fire lanes can be dedicated to fire service use, or can serve ordinary vehicular traffic as well.

There are many considerations for both public roads and fire lanes: clear width, clear height, length, turn radius, arrangement, distance from the building, and paving materials. In all cases, the most stringent practicable dimensions should be considered for design, since future apparatus purchases or mutual aid apparatus from other jurisdictions may exceed the specifications required in a given jurisdiction at any given time.

(Fig. 2.1) Good aerial apparatus access at an apartment fire. This fire lane is wide enough to allow passing even when aerial outriggers are extended, and it is located a proper distance from the building to facilitate aerial operations.

Extent of Access
Minimum building access for fire apparatus is a function of the access road reaching to within a certain distance of all portions of the building’s first floor exterior walls. This limit in NFPA 1 and the IFC is 150 feet for buildings without a complete sprinkler system. For fully sprinklered buildings, NFPA 1 permits this distance to be increased to 450 feet; the IFC leaves this decision up to the discretion of the code official. Further, NFPA 1 requires that the road extend to within 50 feet of an exterior door providing interior access.

The distance from the building to a road or fire lane is sometimes referred to as “setback distance.” NFPA 1141 has additional guidelines for access locations versus building location, with variations depending upon building size, height, sprinkler protection, and separation from other buildings.

During renovations, designers should use particular caution to ensure that the perimeter access continues to meet the NFPA requirements of fire and building codes. The original building site may have been based on a frontage increase. Changing the amount of perimeter access can result in noncompliant building size.

Number of Fire Lanes
A single access route is a basic requirement in both NFPA 1 and the IFC. However, both codes allow the code official or AHJ to require additional access routes due to various factors that could inhibit access (such as terrain, climate, or vehicle congestion). NFPA 1141 requires two access routes for buildings over two stories or 30 feet in height. Multiple fire lanes should be as far removed from one another as practicable.

Turnarounds
Long, dead-end fire lanes or roads should provide a means for fire apparatus to turn around. Both NFPA 1 and the IFC require turnaround space for dead-ends that are more than 150 feet long. There are a number of configurations that facilitate turning maneuvers. These include, “T-turn,” “Y-turn, ” and round cul-de-sac style arrangements (Figures 2.4 and 2.5 for NFPA diagrams). NFPA 1141 requires a 120-foot turnaround at the end of dead-ends more than 300 feet long. Turnaround diagrams also can be found in Appendix D of the IFC.

Clear Width
The basic clear width requirement for apparatus access in the IFC and NFPA 1 is 20 feet. NFPA 1141 calls for one-way fire lanes that are 16 feet wide; however, this applies to roads that do not abut buildings. A clear width of 20 feet will allow most aerial apparatus to extend the outriggers necessary to support the aerial ladder or elevating platform while in operation (Figures 1.2 and 2.1). However, some recently manufactured aerial apparatus require 24 feet of clear width for outrigger extension.

Lanes wide enough for apparatus to pass one another will facilitate developing and expanding operations. NFPA 1141 contains a 24-foot clear width requirement for two-way fire lanes. Appendix D of the IBC calls for a 26-foot clear width at fire hydrant locations, extending for a distance of 20 feet in both directions, as well as a 26-foot width in the vicinity of buildings that are 30 feet or more in height (for aerial operations). NFPA 1141 also contains guidance on access in parking lots.

Height
The basic requirement for clear height of fire lanes in the IFC, NFPA 1 and NFPA 1141 is 13 feet 6 inches. Some modern aerial apparatus may require 14 feet of clearance. Potential for accumulation of snow and ice should be factored into height requirements. The NFPA 1 handbook recommends at least 14 feet in colder climates. Newer aerial apparatus may also require additional height. Finally, avoid overhead wires or other obstructions when determining fire lane locations.

Grade
NFPA 1 sets a maximum grade (slope) of 5 percent for fire lanes. NFPA 1141 specifies a 10 percent maximum, as well as a 0.5 percent minimum to prevent pooling of water. However, some manufacturers have lower limits for specific apparatus. When aerial apparatus is set up for operation, the vehicle body must be leveled with the outriggers. The least grade possible would allow for the most rapid setup.

Loads
All access roads or lanes should be built to withstand the loads presented by modern, heavy fire apparatus as well as potential weather conditions. Paved surfaces, bridges, and other elevated surfaces (such as piers or boardwalks) should be designed to handle the weight of all apparatus that may use them. The IFC Appendix D has a load design requirement of 75,000 pounds. U.S. Department of Transportation standards dictate requirements for both load and frequency. The IFC references the Standard Specification for Highway Bridges from the American Association of State Highway Transportation Officials (AASHTO).

Materials
All-weather paved access is the best surface. Some jurisdictions permit the use of paver blocks or subsurface construction for fire lanes (Figure 2.6). These permit an area to be partially or fully landscaped, while being strong enough to allow fire apparatus to negotiate the area. However, these materials do have inherent limitations. Unless their perimeter is clearly marked, it is easy to drive off the edge. Also, in regions subject to snow accumulation, areas with paver blocks and subsurface construction cannot be plowed effectively (Figure 2.7).

Fig. 2.6) Paver blocks were chosen instead of paving for this access road. The aesthetic benefits are minimal, and the road cannot be plowed effectively.

(Fig. 2.7) The same paver block access lane as shown in figure 2.6, but covered with snow. Access is blocked by a mound of snow plowed from the adjacent parking lot.

Security concerns may impact fire service access. Gates (manual, electric, or radio controlled), bollards, pop-up barricades, and other perimeter controls can delay fire service operations. On the other hand, these access control measures can assist in keeping vehicular traffic away from fire lanes (Figures 2.8 through 2.10). During the design phase of a project, careful coordination between those responsible for security and fire protection can help resolve both concerns. In addition, proper gate size, location, and swing can facilitate fire service access. Wooden bollards are designed with cuts near their bases to allow access when apparatus bump them and break them. However, this results in delays while they are broken and cleared from the path of the apparatus, and may also cause damage.

(Fig. 2.8) Manual gates cause inherent delays because personnel must dismount to unlock them or cut through chains. However, they can also help keep the fire access lane clear by preventing vehicle parking.

(Fig. 2.9) The delays caused by electronic gates can be minimized by providing the fire department with access cards or remove access controls.

(Fig. 2.10) Pop-up barricades such as these are appearing more frequently due to security concerns. Unless security forces are constantly present to operate them, however, the fire department should be provided with a means to do so.

Speed bumps or humps can impact fire apparatus access. Due to their suspension, these vehicles must come to a nearly complete stop to pass over these bumps, delaying arrival to a fire scene. Some special speed bump designs allow for fire apparatus to straddle bumps, while passenger vehicles cannot do so. Dips should also be avoided so that long wheel-base vehicles do not hit bottom and damage undercarriage components and overhanging equipment. 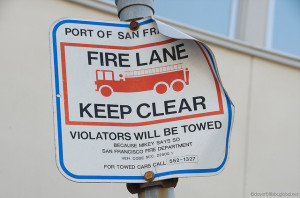 Fire lane signage is important, both for the public and enforcement officials (Figure 2.8). Examples include signs, curb painting, or curb stenciling. A jurisdiction’s requirements must be followed exactly to ensure that no-parking provisions are legally enforceable. Speed bumps should be conspicuously painted, and signs indicating their location should be posted in climates subject to accumulation of snow and ice. Load limits should be posted conspicuously on both ends of bridges or elevated surfaces.