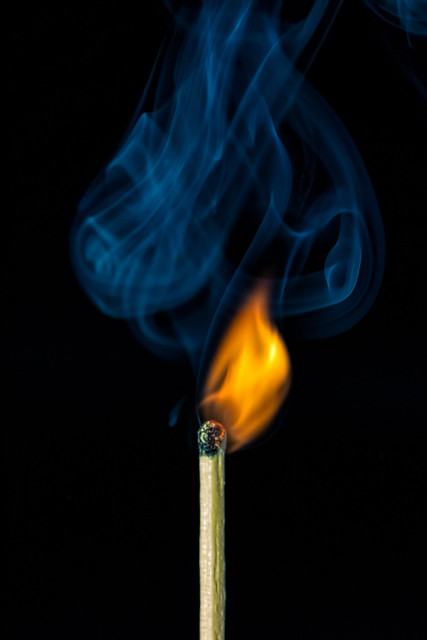 In the space directly above a fire, a column of hot gases and combustion products rises upward. This column is known as a fire or thermal “plume.” As the hot gases rise, cooler air is drawn in or entrained into the plume; this is known as “entrainment.” This cooler air is drawn from around the base of the fire and the boundaries between the plume and the surrounding air. The temperature of the plume decreases with the height above the fire due to cooling effects of the entrained air.

As long as the environment around the plume is relatively stable and not influenced significantly by ventilation, the plume will rise in the shape of a cone. (When this pattern remains on a vertical surface after a fire, investigators often describe it as a V-pattern.) If doors or windows are opened, or a smoke management system operates, the path of the plume may vary dramatically. Likewise, if the fuel array within the space is irregular, the plume may follow it.

If the plume temperature equals the surrounding air temperature, fire gases and smoke stop rising because they lose their buoyancy. Buoyancy is upward force due to the molecular activity of the heated gases near the plume. When this equalization occurs, the smoke begins to spread out horizontally or stratify. In a tall compartment, such as an atrium or covered stadium, or with low energy fires, this loss of buoyancy may result in delayed activation of automatic fire detection devices, automatic fire sprinklers, rooftop smoke vents, or smoke management systems.

In day-to-day conditions, we often observe indoor air movement patterns that are influenced by the exterior weather conditions. The “stack effect” is the natural, vertical air movement in buildings caused by temperature differences and densities between indoor and outdoor air. Like plumes, when the buoyancy of the natural air currents diminishes, the stack effect may cause normal air pollutants in the ambient environment to spread horizontally.

Knowledge Check:  Can you describe the fundamental physical principles of a fire or thermal plume?