This section will give those outside the fire service a basic understanding of how the fire service operates during an emergency. It will also familiarize them with the varying capabilities and organizations involved in fire fighting.

Fire service organizations can be classified as career, volunteer, or a combination of both. Career staff members are paid for their work, while volunteer members are unpaid. Combination organizations have both career and volunteer staff. Career organizations typically serve the larger, more urban or industrial settings, although many smaller cities or towns will have a full or partial career staff. Volunteer organizations are usually found in more suburban or rural settings, although some serve densely populated areas and have very high emergency response rates. Another way to categorize fire departments is by whether fire stations are staffed with personnel ready to respond. Most career organizations have personnel who remain in the station while on duty. However, “call firefighters” are paid on a per response or hourly basis and do not remain in their station awaiting emergency calls. Most volunteers respond from home or work when they are alerted to an emergency. On the other hand, there are organizations that have volunteer personnel staffing their stations on shifts or even living in the stations. Another fire service organization is the industrial fire brigade. This is an organized group of employees specifically trained to provide fire suppression, and perhaps related emergency activities, for a specific employer. Members may be dedicated full time to emergency operations, or emergency response may be a part-time, collateral duty. 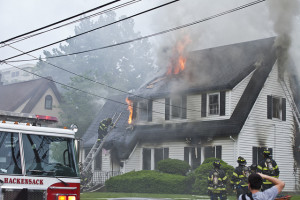 A typical emergency begins with the discovery and reporting of an incident. The time span of this phase can vary greatly, and the fire service has no control over this. After the report is received, the information is processed and the appropriate units are alerted. Those firefighters not staffing the station (whether volunteer, paid on-call, or collateral duty fire brigade members) must travel to the station. Firefighters then don their protective equipment, board the vehicles, and the response phase begins. In some organizations or scenarios, members not staffing the station may go directly to the incident scene. 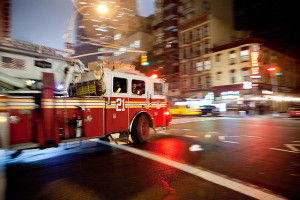 The fire service response to a structure fire would normally involve a number of different units. Fire department vehicles are called apparatus; one is sometimes referred to as a “piece” of apparatus. They come in a wide variety of forms for specialized uses; however, the basic types are pumper and aerial apparatus.

A pumper apparatus normally carries hose, a pump, and a small water tank. Together with its personnel, this is called an engine company. Their main responsibility is to deliver water to the fire. Initially, the engine company may operate using the water available in their tank; however, any incidents other than small exterior fires will typically require that a continuous water supply be established.

This is done via hose lines carrying water from a source of supply (fire hydrant, lake, pond, temporary basin) to the on-board pump, which then boosts the pressure to hose lines or other devices attacking the fire. 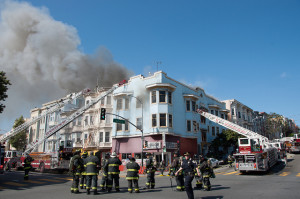 Aerial apparatus is typically equipped with a long aerial ladder or elevating platform on top, an assortment of ground ladders, and many power and hand tools. Together with its personnel, this is often called a truck (or ladder) company. They are responsible for all support functions, including forcible entry, search, rescue, laddering, and ventilation. If aerial apparatus is not available, these truck company functions must be performed by another unit. 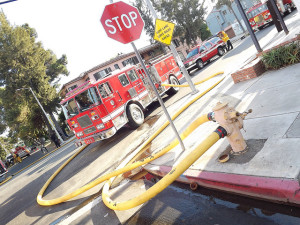 There is also an apparatus called a “quint.” These vehicles are equipped as both a pumper and an aerial apparatus to perform either function. If provided with adequate staffing, and positioned properly at an incident, quints can perform both functions.

Upon arrival at an incident, firefighters must handle many tasks. Standard operating procedures should enable firefighters to quickly assess the situation, and initially arriving units to go into operation. Rescuing of occupants is the first priority, followed by confining and extinguishing the fire. In some cases, firefighters must stop the fire before proceeding with rescues.

Incident command begins with the rapid gathering of information by the first arriving officer. This is called “size-up.” Incident command expands as additional units and chief officers arrive. Commanders must base strategies on the limited information available at any given time regarding the fire, the building, and the occupants. As they receive additional information, commanders should revise their strategies. As needed, they can call for additional resources. Units from another jurisdiction or district that respond are referred to as “mutual aid” units.

As the fire incident is brought under control, salvage, overhaul, and investigation activities take place. These activities, although dangerous and important, are less time-sensitive. As a result, they are less of a consideration for building and fire protection system designers.

Fire service operations take place in stressful, time-sensitive environments (Figure 1.4). Delaying operations, even slightly, especially during the critical initial phase when the first arriving resources are committed, can adversely affect subsequent operations and the outcome. Delays caused by poorly located fire hydrants, confusing alarm information, ineffective communication systems, or inaccessible valves will have a ripple effect on the other portions of the operation. During these delays, the fire will be growing exponentially.

Members of the fire service perform their functions during all times of the day or night, in any weather conditions, and frequently in unfamiliar environments. Their work environment is dangerous, mentally stressful, and physically exhausting. Decisions must often be made without an ideal amount of information, due to the many unknowns on the fireground (such as what is on fire, how much is burning, where the fire is spreading, and where the occupants are located).

These factors stack the deck against the safety of firefighters. Even simplifying the firefighters’ job in small ways will increase the level of safety for them, and thereby for building occupants. Design features that save time or personnel can make a great difference. Any feature that provides additional information regarding the fire, the building, or the occupants, as well as any method to speed the delivery of this information also helps. 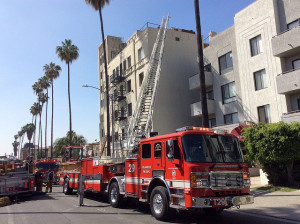 KOREATOWN – Los Angeles Firefighters safely rescued a pet dog while tackling flames in a 4th floor apartment at 525 South Gramercy Place on March 20, 2015. The burning apartment was equipped with both functional smoke alarms and fire sprinklers – which aided firefighter’s efforts in alerting occupants and extinguishing the flames without injury in just 20 minutes.

Below, you see firefighters arriving at a high-rise fire. During this operation, firefighters will interact with most of the features discussed in this document. To successfully mitigate an incident of this nature, firefighters must make many decisions rapidly, and carry out various operations simultaneously. Time saved due to design with the fire service in mind will translate into increased firefighter and occupant safety. 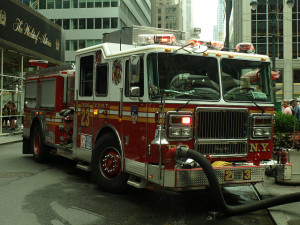 Pre-incident plans (often called “preplans”) are documents prepared by fire departments to assist in emergency operations in specific facilities. They should contain the location of, and information about, the fire protection features discussed in this manual. Preplans are usually prepared and maintained by the unit that normally responds first, or is “first due,” to a particular facility. One could argue that some of the considerations in this manual are not necessary if the fire department prepares thorough preplans. However, the best pre-incident planning cannot overcome situations where the first due unit is committed on another response, out of position, or out of service. Nor can it foresee changes in personnel. It is simply unrealistic to count on all responding personnel to be aware of the pre-incident plan.

Pre-incident planning makes sense but it will always have limitations. Fire departments and firefighters that are more familiar with features of buildings in their response area are better prepared to deal with fires and other emergencies. Designers can assist in pre-incident planning by providing copies of building and system plans (paper or electronic) to the fire service after first seeking permission from the building owner.