Effect of Exercise on Muscles

Sustained, repeated overload of a group of muscles leads to muscle hypertrophy and strengthening of that muscle group.

lactic acid: Also known as milk acid, is a chemical compound that plays a role in various biochemical processes. During power exercises such as sprinting, when the rate of demand for energy is high, glucose is broken down and oxidized to pyruvate, and lactate is produced from the pyruvate faster than the tissues can remove it, so lactate concentration begins to rise.

Type II muscle fibers: Fast-twitch muscles fibers for short, high intensity contractions. Muscles prioritize the use of readily-available ATP, glucose and glycogen for these muscle contractions, which results in a build-up of lactic acid.

The Effects of Exercise

Exercise involves a series of sustained muscle contractions, of either long or short duration, depending on the nature of the physical activity. Effects of exercise on muscles can be considered short-term or immediate, both during and shortly after exercise; as well as long-term, lasting effects.

The effects of exercise on muscles varies with the type and duration of the activity.Aerobic exercise is typical of activities requiring endurance and sustained muscle contractions. Such activities rely mainly on Type I (slow-twitch muscles) which sustain maximal contraction for extensive periods of time. This use of slow-twitch muscles, and the availability of oxygen, prevents the buildup of lactic acid, and typically does not result in substantial muscle fatigue in the short-term. Sustained aerobic respiration tends to shift the metabolic pathways of muscle to favor the use of fat as the primary source of ATP, and glycogen is generally avoided.

Anaerobic respiration, typical of sprinting and weight lifting , prioritizes the use of Type II (fast-twitch) muscles fibers for short, high-intensity contractions. Muscles prioritize the use of readily-available ATP, glucose and glycogen for these contractions, which results in a build-up of lactic acid. Though traditionally viewed as the cause of muscle fatigue, recent research indicates ion shortages, particularly of calcium, during an aerobic exercise, causes such muscle fatigue. However, lactic acid inhibits further ATP production, indirectly causing fatigue. 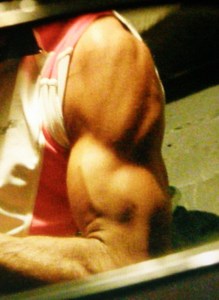 Muscle soreness, once thought to be due to lactic acid accumulation, has more recently been attributed to small tearing of the muscles fibers caused by eccentric contraction.

Muscle hypertrophy, or the increase in muscle mass due to exercise , particularly weight training, is a noticeable long-term effect of exercise. Exercise of specific muscles can often result in hypertrophy in the opposite muscles as well, a phenomenon known as cross education.

Experts and professionals differ widely on the best approaches to specifically achieve muscle growth, as opposed to focusing on gaining strength, power, or endurance. It was generally considered that consistent anaerobic strength training will produce hypertrophy over the long term, in addition to its effects on muscular strength and endurance.