eccentric contraction: The elongation of a muscle while under tension due to an opposing force being greater than the force generated by the muscle.

concentric contraction: a type of muscle contraction in which the muscles shorten while generating force

Exercise damages muscles due to eccentric and concentric muscle loading. Resistance training, and particularly high loading during eccentric contractions, results in delayed onset muscle soreness (DOMS). Previously attributed to the accumulation of lactic acid during exercise, it is now understood that DOMS is due to structural damage in sarcomeres, particularly to the z-disks and contractile filaments. Z-disks provide the structural support for the contractile filaments of the sliding filament mechanism. Overloading of muscles damages these connections and the orientation of the contractile filaments. 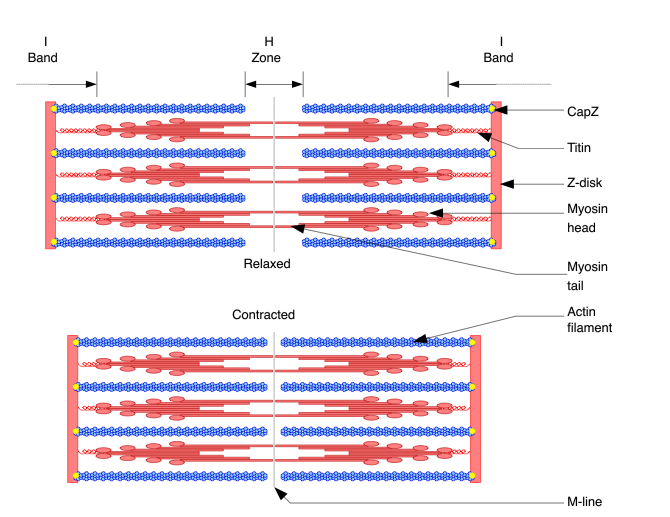 The Sarcomere: Delayed onset muscle soreness is caused by structural damage to the Z disk and myosin and actin filaments.

Acute inflammation of the muscle cells, as understood in exercise physiology, can result after induced eccentric and concentric muscle training. Participation in eccentric training and conditioning, including resistance training and activities that emphasize eccentric lengthening of the muscle including downhill running on a moderate to high incline can result in considerable soreness within 24 to 48 hours, even though blood lactate levels, previously thought to cause muscle soreness, were much higher with level running. This has been noted especially in marathon runners whose muscle fibers revealed remarkable damage after both training and marathon competition. The onset and timing of this gradient damage to the muscle parallels the degree of muscle soreness experienced by the runners.

This disruption of the muscle fibers triggers white blood cells to increase following the induced muscle soreness, leading to the inflammatory response observation from the induced muscle soreness. Elevations in plasma enzymes, myoglobinemia, and abnormal muscle histology and ultrastructure are concluded to be associated with the inflammatory response. High tension in the contractile-elastic system of muscle results in structural damage to the muscle fiber and plasmalemma and its epimysium, perimysium, and endomysium. The mysium damage disrupts calcium homeostasis in the injured fiber and fiber bundles, resulting in necrosis that peaks about 48 hours after exercise. The products of the macrophage activity and intracellular contents (such as histamines, kinins, and K+) accumulate outside the cells. These substances then stimulate the free nerve endings in the muscle; a process that appears accentuated by eccentric exercise, in which large forces are distributed over a relatively small cross-sectional area of the muscle.

The acute, and delayed nature of muscle soreness is indicative of an inflammatory immune response. Damage to the sarcomeres causes aninflux of white blood cells, leading to inflammation, which is itself associated with increased plasma enzyme concentration, myoglobinemia, and abnormal muscle structure and histology. A further response to sarcomere damage is necrosis following damage to the mysium, which peaks about 48 hours following exercise.

The muscle adapts rapidly to the structural damage caused by exercise, and further soreness and damage in later exercise events is mitigated.