Lahars and Their Effects 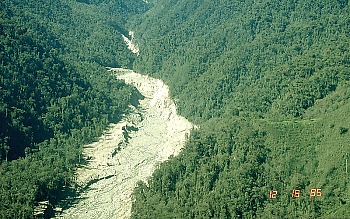 Lahar is an Indonesian term that describes a hot or cold mixture of water and rock fragments flowing down the slopes of a volcano and (or) river valleys. When moving, a lahar looks like a mass of wet concrete that carries rock debris ranging in size from clay to boulders more than 10 m in diameter. Lahars vary in size and speed. Small lahars less than a few meters wide and several centimeters deep may flow a few meters per second. Large lahars hundreds of meters wide and tens of meters deep can flow several tens of meters per second–much too fast for people to outrun.

As a lahar rushes downstream from a volcano, its size, speed, and the amount of water and rock debris it carries constantly change. The beginning surge of water and rock debris often erodes rocks and vegetation from the side of a volcano and along the river valley it enters. This initial flow can also incorporate water from melting snow and ice (if present) and the river it overruns. By eroding rock debris and incorporating additional water, lahars can easily grow to more than 10 times their initial size. But as a lahar moves farther away from a volcano, it will eventually begin to lose its heavy load of sediment and decrease in size.

Eruptions may trigger one or more lahars directly by quickly melting snow and ice on a volcano or ejecting water from a crater lake. More often, lahars are formed by intense rainfall during or after an eruption–rainwater can easily erode loose volcanic rock and soil on hillsides and in river valleys. Some of the largest lahars begin as landslides of saturated and hydrothermally altered rock on the flank of a volcano or adjacent hillslopes. Landslides are triggered by eruptions, earthquakes, precipitation, or the unceasing pull of gravity on the volcano.

Lahars almost always occur on or near stratovolcanoes because these volcanoes tend to erupt explosively and their tall, steep cones are either snow covered, topped with a crater lake, constructed of weakly consolidated rock debris that is easily eroded, or internally weakened by hot hydrothermal fluids. Lahars are also common from the snow- and ice-covered shield volcanoes in Iceland where eruptions of fluid basalt lava frequently occur beneath huge glaciers.

The scenarios listed below illustrate most of the mechanisms by which lahars are generated. For convenience, we’ve grouped the mechanisms according to whether a volcano is erupting, has erupted, or is quiet. Each mechanism is illustrated with one or more case studies.

Volcano Landslides and Their Effects

Landslides are large masses of rock and soil that fall, slide, or flow very rapidly under the force of gravity. These mixtures of debris move in a wet or dry state, or both. Landslides commonly originate as massive rockslides or avalanches which disintegrate during movement into fragments ranging in size from small particles to enormous blocks hundreds of meters across. If the moving rock debris is large enough and contains a large content of water and fine material (typically, >3-5 percent of clay-sized particles), the landslide may transform into a lahar and flow downvalley more than 100 km from a volcano!

Landslides are common on volcanoes because their massive cones (1) typically rise hundreds to thousands of meters above the surrounding terrain; and (2) are often weakened by the very process that created them–the rise and eruption of molten rock. Each time magma moves toward the surface, overlying rocks are shouldered aside as the molten rock makes room for itself, often creating internal shear zones or oversteepening one or more sides of the cone. Magma that remains within the cone releases volcanic gases that partially dissolve in groundwater, resulting in a hot acidic hydrothermal system that weakens rock by altering rock minerals to clay. Furthermore, the tremendous mass of thousands of layers lava and loose fragmented rock debris can lead to internal faults and fault zones that move frequently as the cone “settles” under the downward pull of gravity.

These conditions permit a number of factors to trigger a landslide or to allow part of a volcano’s cone to simply collapse under the influence of gravity:

A landslide typically destroys everything in its path and may generate a variety of related activity. Historically, landslides have caused explosive eruptions, buried river valleys with tens of meters of rock debris, generated lahars, triggered waves and tsunami, and created deep horseshoe-shaped craters.

By removing a large part of a volcano’s cone, a landslide may abruptly decrease pressure on the shallow magmatic and hydrothermal systems, which can generate explosions ranging from a small steam explosion to large steam- and magma-driven directed blasts. A large landslide often buries valleys with tens to hundreds of meters of rock debris, forming a chaotic landscape marked by dozens of small hills and closed depressions. If the deposit is thick enough, it may dam tributary streams to form lakes in the subsequent days to months; the lakes may eventually drain catastrophically and generate lahars and floods downstream.

Landslides also generate some of the largest and most deadly lahars, either by transforming directly into a lahar or, after it stops moving, from dewatering of the deposit. Historically, however, the most deadly volcano landslide occurred in 1792 when sliding debris from Mt. Mayuyama near Unzen Volcano in Japan slammed into the Ariaka Sea and generated a wave on the opposite side that killed nearly 15,000 people.

On a volcano, landslides typically carve deep gashes into its cone or create large horseshoe-shaped craters hundreds of meters deep and more than a kilometer in width.

Volcanic landslides can do the following:

Lava Flows and Their Effects

Lava flows are streams of molten rock that pour or ooze from an erupting vent. Lava is erupted during either nonexplosive activity or explosive lava fountains. Lava flows destroy everything in their path, but most move slowly enough that people can move out of the way. The speed at which lava moves across the ground depends on several factors, including (1) type of lava erupted and its viscosity; (2) steepness of the ground over which it travels; (3) whether the lava flows as a broad sheet, through a confined channel, or down a lava tube; and (4) rate of lava production at the vent.

Fluid basalt flows can extend tens of kilometers from an erupting vent. The leading edges of basalt flows can travel as fast as 10 km/hour on steep slopes but they typically advance less than 1 km/hour on gentle slopes. But when basalt lava flows are confined within a channel or lava tube on a steep slope, the main body of the flow can reach velocities >30 km/hour.

Viscous andesite flows move only a few kilometers per hour and rarely extend more than 8 km from their vents. Viscous dacite and rhyolite flows often form steep-sided mounds called lava domes over an erupting vent. Lava domes often grow by the extrusion of many individual flows >30 m thick over a period of several months or years. Such flows will overlap one another and typically move less than a few meters per hour. 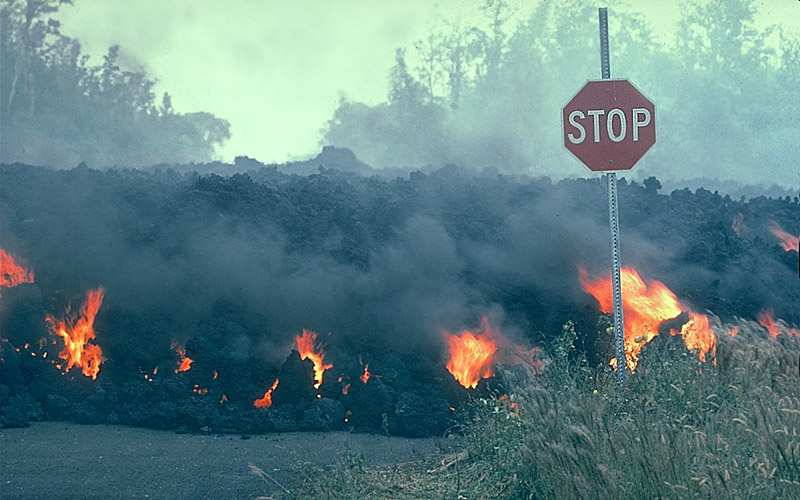 Figure 2. `A`a lava flow moves through an intersection in the Royal Garderns subdivision on the south flank of Kilauea Volcano, Hawai`i. Photograph by J.D. Griggs in 1984.

Everything in the path of an advancing lava flow will be knocked over, surrounded, or buried by lava, or ignited by the extremely hot temperature of lava. When lava erupts beneath a glacier or flows over snow and ice, meltwater from the ice and snow can result in far-reaching lahars. If lava enters a body of water or water enters a lava tube, the water may boil violently and cause an explosive shower of molten spatter over a wide area. Methane gas, produced as lava buries vegetation, can migrate in subsurface voids and explode when heated. Thick viscous lava flows, especially those that build a dome, can collapse to form fast-moving pyroclastic flows.

Deaths caused directly by lava flows are uncommon because most move slowly enough that people can move out the way easily and flows usually don’t travel far from the vent. Death and injury can result when onlookers approach an advancing lava flow too closely or their retreat is cut off by other flows. Deaths attributed to lava flows are often due to related causes, such as explosions when lava interacts with water, the collapse of an active lava delta, asphyxiation due to accompanying toxic gases, pyroclastic flows from a collapsing dome, and lahars from meltwater.

Other natural phenomena such as hurricanes, tornadoes, tsunami, fires, and earthquakes often destroy buildings, agricultural crops, and homes, but the owner(s) can usually rebuild or repair structures and their businesses in the same location. Lava flows, however, can bury homes and agricultural land under tens of meters of hardened black rock; landmarks and property lines become obscured by a vast, new hummocky landscape. People are rarely able to use land buried by lava flows or sell it for more than a small fraction of its previous worth. 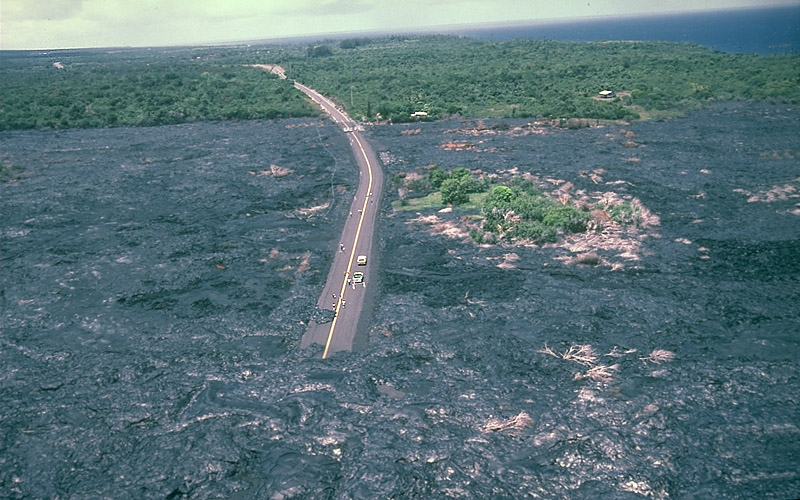 Figure 3. Lava buries or surrounds everything.

Because lava flows can completely block roads and highways that may serve as the only evacuation route for people threatened by an advancing flow, it is vital for communities that could be inundated with lava to develop emergency-response plans.

One of the chief threats of lava flows to property owners is that the flows may burn buildings and homes even if the flow doesn’t reach the structure. This house caught fire from the intense heat of an advancing `a`a flow (note red glow of flow left of the house). 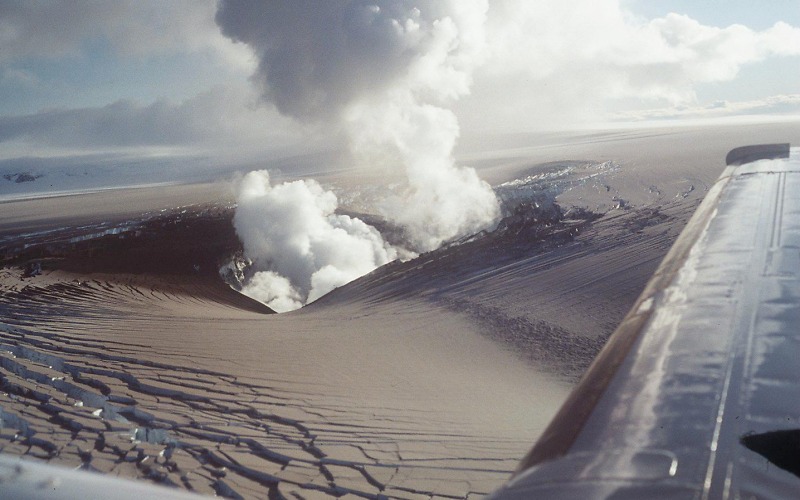 Figure 4. View of eruption crater and ash-covered Vatnajökull glacier about 36 hours after the eruption had broken through the ice.

Lava melts snow and ice to form jökulhlaups and lahars. By this time, the area of subsidence had grown to about 9 km long and 2-3 km wide. The eruption continued for about another 10 days, and meltwater from the glacier flowed into the Grímsvötn caldera. On October 1, water level in the caldera’s subglacial lake was about 1410 m; by October 16, the water level had risen to 1504 m, an increase of 94 m! According to scientists monitoring the activity, lava erupting from the fissure was piled up on the ground beneath the glacier, “forming a mountain ridge which in places is expected to be 200 m high.”

On October 16, scientists stated that the meltwater, which had been accumulating under the ice shelf in the Grímsvötn caldera lake, could begin draining at any time to trigger a jökulhlaup (glacial outburst flood). On November 5 the expected jökulhlaup began.