If you found this feature while out in the field, could you find it again? 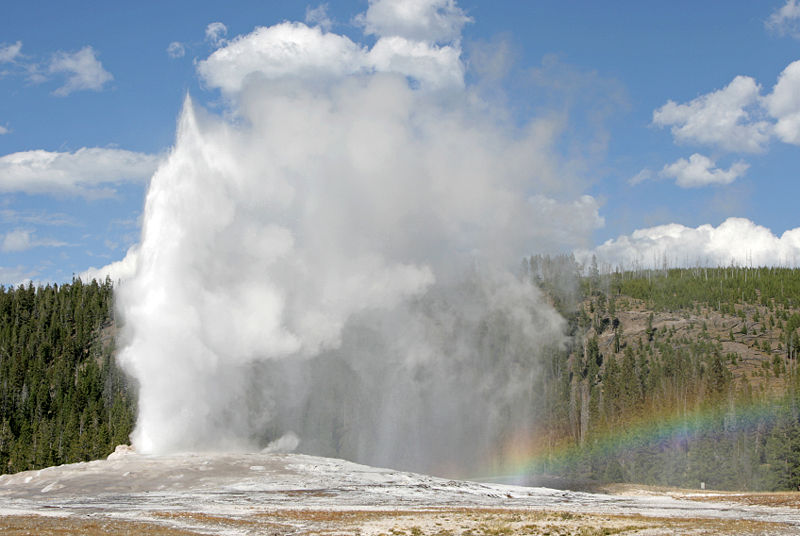 You may need to tell someone when your truck gets stuck when you’re in the field so you’ll need a direction to give them.

The photo in figure 1 is of Old Faithful Geyser in Yellowstone National Park. Let’s explore just a few of the ways we can pinpoint the location of this famous geological icon.

A look on a reliable website shows us that Old Faithful Geyser is located at N44o27’ 43’’. What does this mean?

Longitude lines are circles that go around the Earth from north to south, like the sections of an orange. Longitude is measured perpendicular to the Equator. The Prime Meridian is 0o longitude and passes through Greenwich, England. The International Date Line is the 180o meridian. Old Faithful is in the Western Hemisphere, between the Prime Meridian in the east and the International Date Line in the west.

An accurate location must take into account the third dimension. Elevation is the height above or below sea level. Sea level is the average height of the ocean’s surface or the midpoint between high and low tide. Sea level is the same all around Earth.

Satellites continually orbit Earth and can be used to indicate location. A global positioning system receiver detects radio signals from at least four nearby GPS satellites. The receiver measures the time it takes for radio signals to travel from a satellite and then calculates its distance from the satellite using the speed of radio signals. By calculating distances from each of the four satellites the receiver can triangulate to determine its location. You can use a GPS meter to tell you how to get to Old Faithful.

Direction is important if you want to go between two places. Directions are expressed as north (N), east (E), south (S), and west (W), with gradations in between. The most common way to describe direction in relation to the Earth’s surface is with a compass, a device with a floating needle that is actually a small magnet. The compass needle aligns itself with the Earth’s magnetic north pole. Since the magnetic north pole is 11.5 degrees offset from its geographic north pole on the axis of rotation, you must correct for this discrepancy.

Without using a compass, we can say that to get to Old Faithful, you enter Yellowstone National Park at the South Entrance, drive north-northeast to West Thumb, and then drive west-northwest to Old Faithful.