Figure 1. A spring coming out of the shale near Red Creek. Yes, that water is black! (Photo: Matt Herod)

As we’ve learned, groundwater is simply water that exists underground. However, there are still lots of misconceptions about how people envision groundwater. Many envision large underground lakes and rivers, and while those do exist, they represent an infinitesimally small percentage of all groundwater. Generally speaking groundwater exists in the pore spaces between grains of soil and rocks. Imagine a water filled sponge. All of the holes in that sponge are water-filled. By squeezing that sponge we force the water out, similarly, by pumping an aquifer we force the water out of pore spaces.

There are lots of terms in hydrogeology, most of which are very simple, but essential. Here are a few of the big ones and their meanings. 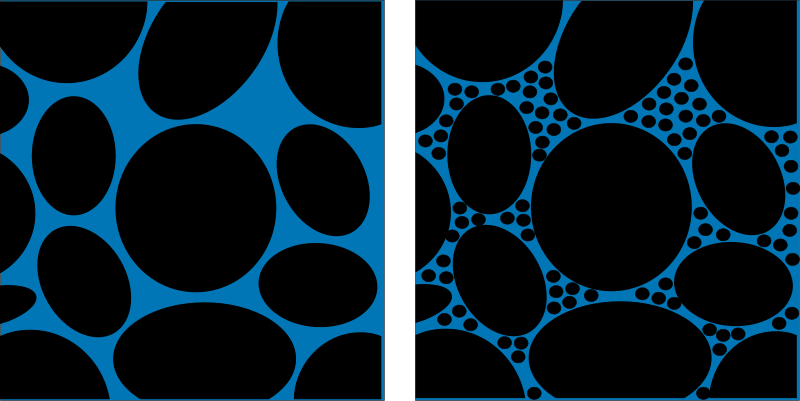 Figure 2. Porosity in two different media. The image on the left is analagous to gravel whereas on the right smaller particles are filling some of the pores and displacing water. Therefore, the water content of the material on the right is less. (Source: Wikipedia)

Figure 3. Video showing how connected pores have high permeability and can transport water easily. Note that some pores are isolated and cannot transport water trapped within them.

An aquifer is a term for a type of soil or rock that can hold and transfer water that is completely saturated with water. That means that all it is simply a layer of soil or rock that has a reasonably high porosity and permeability that allows it to contain water and transfer it from pore to pore relatively quickly and all of the pore spaces are filled with water. Good examples of aquifers are glacial till or sandy soils which have both high porosity and high permeability. Aquifers allows us to recover groundwater by pumping quickly and easily. However, overpumping can easily reduce the amount of water in an aquifer and cause it to dry up. Aquifers are replenished when surface water infiltrates through the ground and refills the pore spaces in the aquifer. This process is called recharge. It is especially important to ensure that recharge is clean and uncontaminated or the entire aquifer could become polluted. There are two main types of aquifer. An unconfined aquifer is one that does not have an aquitard above it but usually does below it.

When a water-bearing rock readily transmits water to wells and springs, it is called an aquifer. Wells can be drilled into the aquifers and water can be pumped out. Precipitation eventually adds water (recharge) into the porous rock of the aquifer. The rate of recharge is not the same for all aquifers, though, and that must be considered when pumping water from a well. Pumping too much water too fast draws down the water in the aquifer and eventually causes a well to yield less and less water and even run dry. In fact, pumping your well too fast can even cause your neighbor’s well to run dry if you both are pumping from the same aquifer.

In the diagram below, you can see how the ground below the water table (the blue area) is saturated with water. The “unsaturated zone” above the water table (the greenish area) still contains water (after all, plants’ roots live in this area), but it is not totally saturated with water. You can see this in the two drawings at the bottom of the diagram, which show a close-up of how water is stored in between underground rock particles.

Sometimes the porous rock layers become tilted in the earth. There might be a confining layer of less porous rock both above and below the porous layer. This is an example of a confined aquifer. In this case, the rocks surrounding the aquifer confines the pressure in the porous rock and its water. If a well is drilled into this “pressurized” aquifer, the internal pressure might (depending on the ability of the rock to transport water) be enough to push the water up the well and up to the surface without the aid of a pump, sometimes completely out of the well. This type of well is called artesian. The pressure of water from an artesian well can be quite dramatic.

A relationship does not necessarily exist between the water-bearing capacity of rocks and the depth at which they are found. A very dense granite that will yield little or no water to a well may be exposed at the land surface. Conversely, a porous sandstone, such as the Dakota Sandstone mentioned previously, may lie hundreds or thousands of feet below the land surface and may yield hundreds of gallons per minute of water. Rocks that yield freshwater have been found at depths of more than 6,000 feet, and salty water has come from oil wells at depths of more than 30,000 feet. On the average, however, the porosity and permeability of rocks decrease as their depth below land surface increases; the pores and cracks in rocks at great depths are closed or greatly reduced in size because of the weight of overlying rocks.

Water movement in aquifers is highly dependent of the permeability of the aquifer material. Permeable material contains interconnected cracks or spaces that are both numerous enough and large enough to allow water to move freely. In some permeable materials groundwater may move several metres in a day; in other places, it moves only a few centimeters in a century. Groundwater moves very slowly through relatively impermeable materials such as clay and shale.

After entering an aquifer, water moves slowly toward lower lying places and eventually is discharged from the aquifer from springs, seeps into streams, or is withdrawn from the ground by wells. Groundwater in aquifers between layers of poorly permeable rock, such as clay or shale, may be confined under pressure. If such a confined aquifer is tapped by a well, water will rise above the top of the aquifer and may even flow from the well onto the land surface. Water confined in this way is said to be under artesian pressure, and the aquifer is called an artesian aquifer.

Here’s a little experiment to show you how artesian pressure works. Fill a plastic sandwich baggie with water, put a straw in through the opening, tape the opening around the straw closed, do not point the straw towards your teacher or parents, and then squeeze the baggie. Artesian water is pushed out through the straw.

The other type is a confined aquifer that has an aquitard above and below it. An aquitard is basically the opposite of an aquifer with one key exception. Aquitards have very low permeability and do not transfer water well at all. In fact, in the ground they often act as a barrier to water flow and separate two aquifers. The one key exception is that aquitards can have high porosity and hold lots of water however, due to the their low permeability they are unable to transmit it from pore to  pore and therefore water cannot flow within an aquitard very well. A good example of an aquitard is a layer of clay. Clay often has high porosity but almost no permeability meaning it is essentially a barrier which water cannot flow through and the water within it is trapped. However, there is still limited water flow within aquitards due to other processes that I won’t get into now. 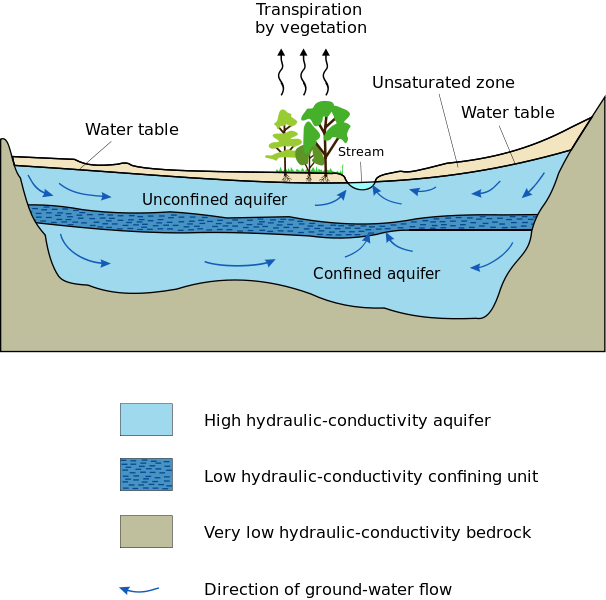