Enormous slabs of lithosphere move unevenly over the planet’s spherical surface, resulting in earthquakes. This chapter deals with two types of geological activity that occur because of plate tectonics: mountain building and earthquakes. First, we will consider what can happen to rocks when they are exposed to stress.

Causes and Types of Stress

Figure 2. Shearing in rocks. The white quartz vein has been elongated by shear.

When stress causes a material to change shape, it has undergone strain ordeformation. Deformed rocks are common in geologically active areas. 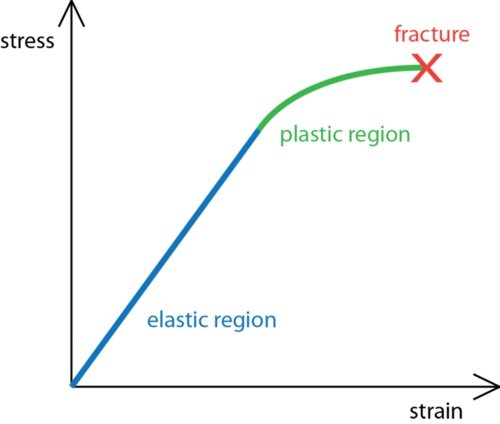 Under what conditions do you think a rock is more likely to fracture? Is it more likely to break deep within Earth’s crust or at the surface? What if the stress applied is sharp rather than gradual?

Sedimentary rocks are important for deciphering the geologic history of a region because they follow certain rules.

You can trace the deformation a rock has experienced by seeing how it differs from its original horizontal, oldest-on-bottom position (figure 4a). This deformation produces geologic structures such as folds, joints, and faults that are caused by stresses (figure 4b). Using the rules listed above, try to figure out the geologic history of the geologic column below. 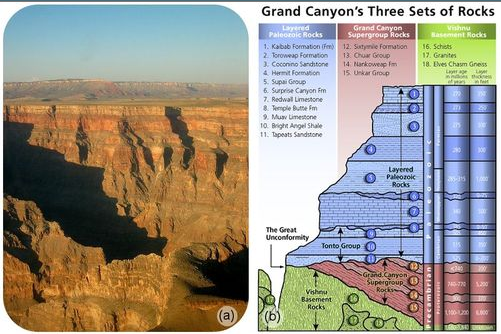 Figure 4. (a) In the Grand Canyon, the rock layers are exposed like a layer cake. Each layer is made of sediments that were deposited in a particular environment – perhaps a lake bed, shallow offshore region, or a sand dune. (b) In this geologic column of the Grand Canyon, the sedimentary rocks of the “Layered Paleozoic Rocks” column (layers 1 through 11) are still horizontal. Grand Canyon Supergroup rocks (layers 12 through 15) have been tilted. Vishnu Basement Rocks are not sedimentary (rocks 16 through 18). The oldest layers are on the bottom and youngest are on the top.

Rocks deforming plastically under compressive stresses crumple into folds (figure 5). They do not return to their original shape. If the rocks experience more stress, they may undergo more folding or even fracture. 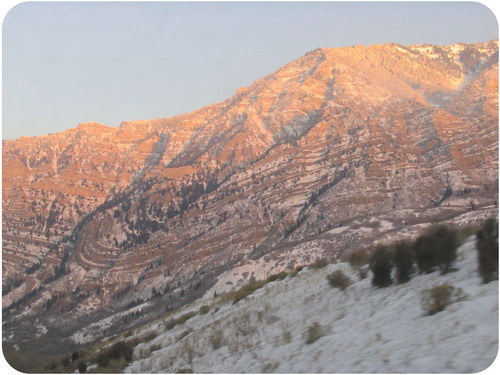 Figure 5. Snow accentuates the fold exposed in these rocks in Provo Canyon, Utah.

Three types of folds are seen.

When rocks arch upward to form a circular structure, that structure is called a dome. If the top of the dome is sliced off, where are the oldest rocks located?

When rocks bend downward in a circular structure, that structure is called a basin (figure 9). If the rocks are exposed at the surface, where are the oldest rocks located? 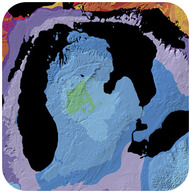 Figure 9. Basins can be enormous. This is a geologic map of the Michigan Basin, which is centered in the state of Michigan but extends into four other states and a Canadian province.

A rock under enough stress will fracture. If there is no movement on either side of a fracture, the fracture is called a joint, as shown in (figure 10). 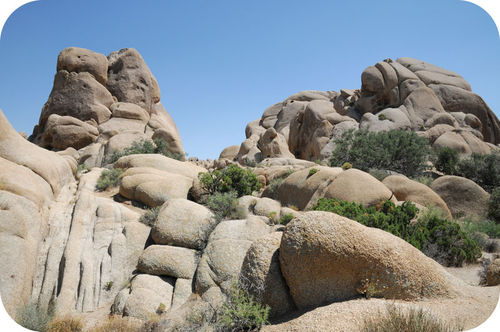 Figure 10. Granite rocks in Joshua Tree National Park showing horizontal and vertical jointing. These joints formed when the confining stress was removed from the granite.

If the blocks of rock on one or both sides of a fracture move, the fracture is called a fault (figure 11). Sudden motions along faults cause rocks to break and move suddenly. The energy released is an earthquake. 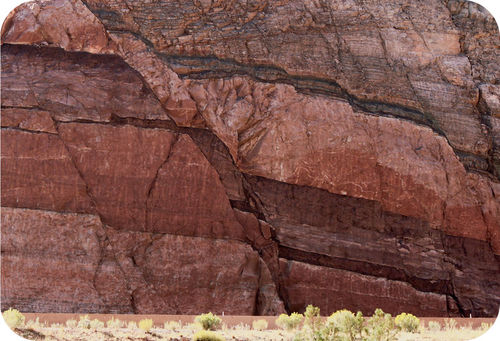 Figure 11. Faults are easy to recognize as they cut across bedded rocks.

Slip is the distance rocks move along a fault. Slip can be up or down the fault plane. Slip is relative, because there is usually no way to know whether both sides moved or only one. Faults lie at an angle to the horizontal surface of the Earth. That angle is called the fault’s dip. The dip defines which of two basic types a fault is. If the fault’s dip is inclined relative to the horizontal, the fault is a dip-slip fault (figure 12). There are two types of dip-slip faults. In normal faults, the hanging wall drops down relative to the footwall. In reverse faults, the footwall drops down relative to the hanging wall. 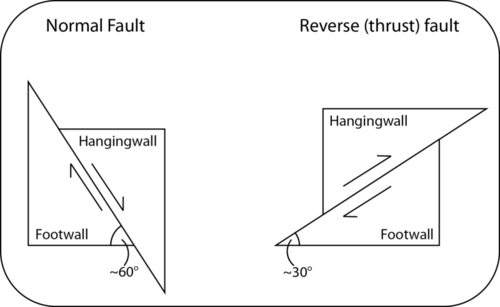 Figure 12. This diagram illustrates the two types of dip-slip faults: normal faults and reverse faults. Imagine miners extracting a resource along a fault. The hanging wall is where miners would have hung their lanterns. The footwall is where they would have walked.

Here is an animation of a normal fault.

A thrust fault is a type of reverse fault in which the fault plane angle is nearly horizontal. Rocks can slip many miles along thrust faults (Figure 13). 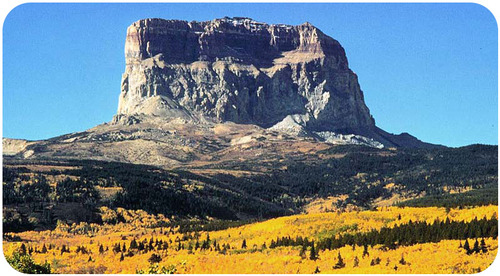 Figure 13. At Chief Mountain in Montana, the upper rocks at the Lewis Overthrust are more than 1 billion years older than the lower rocks. How could this happen?

Here is an animation of a thrust fault.

Normal faults can be huge. They are responsible for uplifting mountain ranges in regions experiencing tensional stress (figure 14). 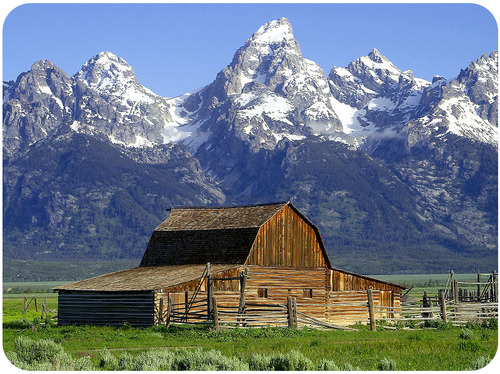 Figure 14. The Teton Range in Wyoming rose up along a normal fault.

Figure 16. The San Andreas is a massive transform fault.

California’s San Andreas Fault is the world’s most famous strike-slip fault. It is a right-lateral strike slip fault (figure 16).

Here is a strike-slip fault animation.

People sometimes say that California will fall into the ocean someday, which is not true. This animation shows movement on the San Andreas into the future. 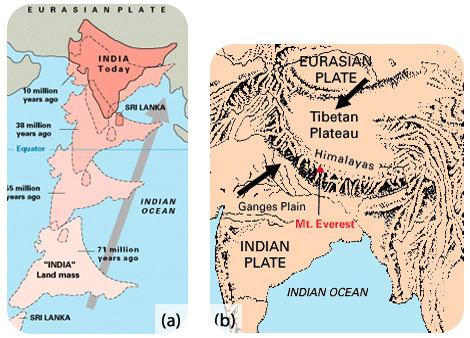 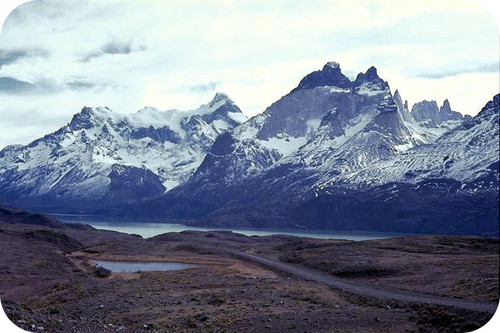 Figure 18. The Andes Mountains are a chain of continental arc volcanoes that build up as the Nazca Plate subducts beneath the South American Plate.

When tensional stresses pull crust apart, it breaks into blocks that slide up and drop down along normal faults. The result is alternating mountains and valleys, known as a basin-and-range (figure 19).

This is a very quick animation of movement of blocks in a basin-and-range setting.