The following table summarizes the physical layers of the earth.

The liquid outer core is the source of the earth’s magnetic field, as a result of its metallic nature, which means it contains electrons not attached to particular nuclei. Heat is transferred upward to the mantle from the inner core via convective cells, in which the liquid in the outer core flows in looping patterns. The combination of the loose electrons and looping convective flow with the rotation of the earth results in a geodynamo that produces a magnetic field. Because the magnetic field is generated by a dynamically convecting and rotating sphere of liquid, it is unstable. Every now and then, after several hundred thousand to several million years, the earth’s magnetic field becomes unstable to the point that it temporarily shuts down. When it restarts, its north and south magnetic poles must inevitably be reversed, according to the physics of magnetic fields produced spontaneously from geodyamos. (For comparison, the magnetic field of the Sun, which is also produces by convecting electrical charges in a rotating sphere, becomes magnetically unstable and reverses its magnetic field on a more regular basis, every 11 years.)

Given that the inner core is a solid metallic sphere, made mostly of iron and nickel, surrounded entirely by liquid, it can be pictured as a giant ball bearing spinning in a pressurized fluid. Detailed studies of earthquake waves passing through the inner core have found evidence that it is spinning – rotating – just slightly faster than the rest of the earth.

The interior of the earth is not simply layered. Some of the layers, particularly the crust and lithosphere, are highly variable in thickness. The boundaries between layers are rough and irregular. Some layers penetrate other layers at certain places. Variations in the thickness of the earth’s layers, irregularities in layer boundaries, and interpenetrations of layers, reflect the dynamic nature of the earth.

For example, the lithosphere penetrates deep into the mesosphere at subduction zones. Although it is still a matter of research and debate, there is some evidence that subducted plates may penetrate all the way into the lower mesosphere. If so, plate tectonics is causing extensive mixing and exchange of matter in the earth, from the bottom of the mantle to the top of the crust.

As another example, hot spots may be places where gases and fluids rise from the core-mantle boundary, along with heat. Studies of helium isotopes in hot spot volcanic rocks find evidence that much of the helium comes from deep in the earth, probably from the lower mesosphere.

How Do We Know?

We humans have no hands-on access to samples of the earth’s interior from deeper than the upper mantle. The earth’s core is so dense and so deep, it is completely inaccessible. Contrary to a popular misconception, lava does not come from the earth’s core. Magma and lava come from only the lithosphere and asthenosphere, the upper 200 km of earth’s 6,400 km thickness. Attempts have been made to drill through the crust to reach the mantle, without success. Given the lack of actual pieces of the earth from deeper than the asthenosphere, how do we know about the internal layers of the earth, what they are made of, and what their properties and processes are?

There are two sources of rock samples from the lower lithosphere and asthenosphere, igneous rocks and fault blocks. Some igneous rocks contain xenoliths, pieces of solid rock that were adjacent to the body of magma, became incorporated into the magma, and were carried upward in the magma. From xenoliths in plutonic and volcanic igneous rocks, many samples of the lower crust and upper mantle have been identified and studied.

Another source of pieces of the lower crust and upper mantle is fault zones and exposed orogenic zones (root zones of mountains that have been exposed after much uplift and erosion). Some slabs of thrust-faulted rock contain lithospheric mantle rock. In ophiolites, ultramafic rock from the mantle part of the lithosphere is a defining attribute. Most ophiolites and thrust-faulted slices of rock that contain pieces of the upper mantle are related to either subduction zones or transform plate boundaries. 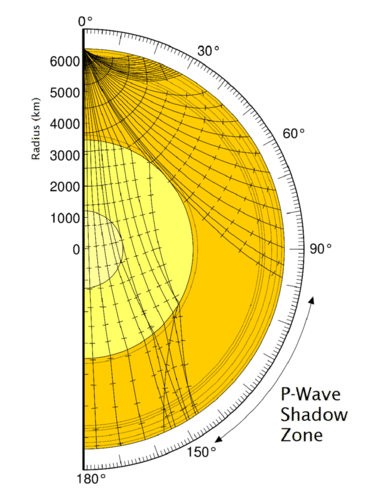 Where seismic waves speed up or slow down, they refract, changing the direction in which they are traveling. Where seismic waves encounter an abrupt boundary between two very different layers, some of the seismic wave energy is reflected, bouncing back at the same angle it struck. The reflections and refractions of seismic waves allow the layers and boundaries within the earth to be located and studied.

By tracking seismic waves, scientists have learned what makes up the planet’s interior (figure 2). 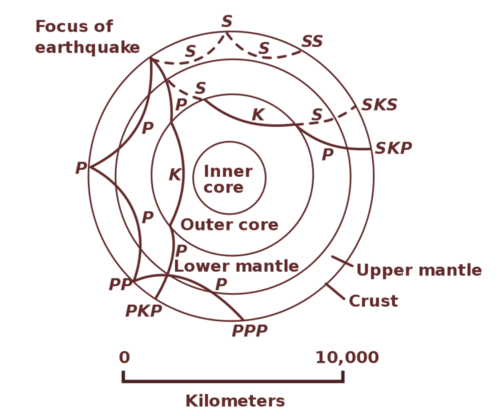 Figure 3. Letters describe the path of an individual P-wave or S-wave. Waves traveling through the core take on the letter K.

Here are some examples of what we have been able to distinguish in the earth’s interior from the study of seismic waves and how they travel through the layers of the earth:

Because different parts of the crust, mantle, and core have different thicknesses and densities, the strength of gravity over particular points on earth varies slightly. These variations from the average strength of earth’s gravity are called gravity anomalies. Mapping and analyzing gravity anomalies, in some cases by using satellites, and also be measuring the effect of gravity anomalies on the surface shape of the ocean, has given us much insight into subduction zones, mid-ocean spreading ridges, and mountain ranges, including constraints on the depths of their roots.

The earth’s gravity tells us how much total mass the earth has, but does not tell us how the mass is distributed within the earth. A property known as moment of inertia, which is the resistance (inertia) of an object to changes in its spin (rotation), is determined by exactly how matter is distributed in a spinning object, from its core to its surface. The earth’s moment of inertia is measured by its effect on other objects with which it interacts gravitationally, including the Moon, and satellites. Knowing the earth’s moment of inertia provides a way of checking and refining our understanding of the mass and density of each of the earth’s internal layers.

Studies of meteorites, which are pieces of asteroids that have landed on earth, along with astronomical studies of what the Sun, the other planets, and orbiting asteroids are made of, give us a model for the general chemical composition of objects in the inner solar system, which are made mainly of elements that form rocks and metals, as opposed to the outer planets such as Jupiter, which are made mostly of light, gas-forming elements. The general compositional model of the rocky and metallic part of the solar system has much higher percentages of iron, nickel, and magnesium than is found in the earth’s crust.

If the earth’s mantle is made of ultramafic rock, as is found in actual samples of the upper mantle in xenoliths and ophiolites, that would account for part of the missing iron, nickel, and magnesium. But much more iron and nickel would still be missing. If the core is made mostly of iron, and abundant nickel as well, it would give the earth an overall composition similar to the composition of other objects in the inner solar system, and similar to the proportions of rock and metal-forming elements measured in the Sun.

A mantle with an ultramafic composition, and a core made mostly of iron plus nickel, would make earth’s composition match the composition of the rest of the solar system, and give those layers the right densities to account for the earth’s moment of inertia and total mass.

Geology, like other sciences, is based on experiment along with observation and theory. earth scientists and physicists have developed experimental methods to study how materials behave at the pressures and temperatures of the earth’s interior, including core temperatures and pressures. They can measure such properties as the density, the state of matter (liquid or solid), the rigidity, the compressibility, and the speed at which seismic waves pass through these materials at high pressures and temperatures. These studies allow further refinement of our knowledge of what the interior of the earth is made of and how it behaves. These experiments support the theory that the mantle is ultramafic and the core is mostly iron and nickel, because they show that materials with those compositions have the same density and seismic wave speeds as have been observed in the earth.