Why It Matters: Hydrology

Understand roles, processes, and effects of streams and groundwater

This section focuses on hydrology. It goes without saying how important water is to all life on the planet. We simply cannot survive without it. Water is what sets the Earth apart from the other planets in our solar system. While the oceans cover roughly 74% of the Earth’s surface and are the driving force behind the hydrologic cycle, it is the availability of freshwater that is of most concern today.

Currently, California is experiencing severe drought while the Midwest is currently undergoing extreme flooding. While these variations are a normal part of the complex dynamic of climate, they impact us in major ways. California is currently scrambling to find a solution as it is currently estimated that in just over a year they will no longer have enough freshwater to meet their needs. With flooding in the Midwest, the loss of life and property damage is steadily increasing. Droughts and floods are a normal part of the hydrologic cycle, the issue is how to be prepared for them and how to best adapt to them in order to survive. 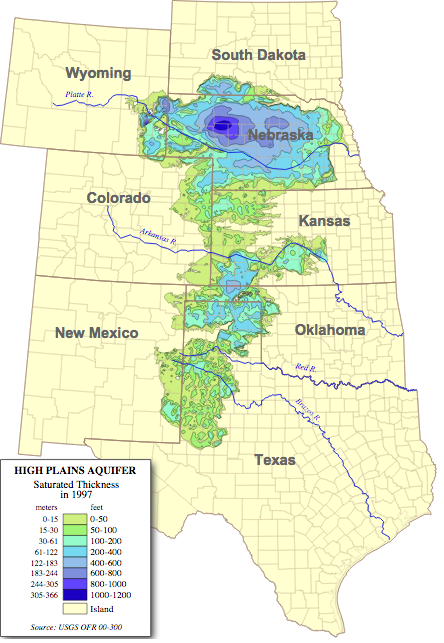 Figure 1. Saturated thickness of the Ogallala Aquifer in 1997 after several decades of intensive withdrawals. The breadth and depth of the aquifer generally decrease from north to south.

Freshwater consists of glaciers, groundwater, surface water (such as ponds and lakes) as well as water stored in the biosphere and the atmosphere. The vast majority of freshwater is used in agriculture for irrigation purposes. Again, without this freshwater our food production would suffer. Most people associate mining with metals, fuel resources and gems. However, would it surprise you to learn that we actually mine water? Mining means withdrawing or removing something from within the Earth. Groundwater is found within the Earth and is our second largest store of freshwater. Currently, groundwater use in the US is centered on the Ogallala Aquifer.

The Ogallala Aquifer is located in the central portion of the United States. It is located beneath 8 states: Texas, Oklahoma, Colorado, Kansas, Nebraska, New Mexico, South Dakota and Wyoming. It is approximately 174,000 square miles in area and is more than 10,000,000 years old (Kromm, n.d.). It is the freshwater source for over 13,600,000 acres of farming and ranch lands. This aquifer formed, in part, due to melting glaciers and took over 64,000 years to fill (Overmann, n.d.). It is the largest aquifer in North America and one of the largest freshwater sources in the world. Initially, farmers only had to drill down anywhere from 25 to 50 feet before they would hit the water table. However, in the 1940’s this began to change. With the technology boom associated with the war and the post war period, numerous devices such as high capacity pumps allowed easier and greater access to the aquifer. In some places, farmers now have to drill over 500 feet before they hit the water table. The Ogallala was originally over 500 feet in thickness but now that has diminished and varies by location. The issue with this particular aquifer is that is being used at a much greater rate than it is recharged. In fact, the Ogallala is considered to be a “fossil aquifer” which means once it is gone, it is gone. What does this mean for us? How does this translate into affecting you or your family?

Here is a short video that shows you some of the ways farmers are adapting the rapid depletion of the aquifer.