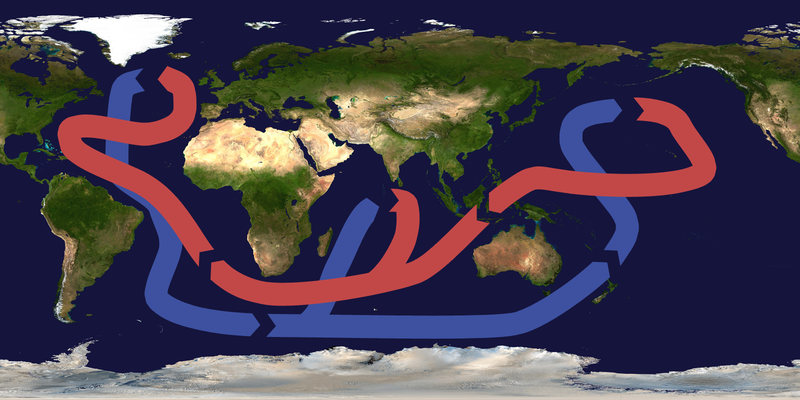 Two things then happen. The dense water pushes deeper water out of its way and that water moves along the bottom of the ocean. This deep water mixes with less dense water as it flows. Surface currents move water into the space vacated at the surface where the dense water sank. Water also sinks into the deep ocean off of Antarctica. Since unlimited amounts of water cannot sink to the bottom of the ocean, water must rise from the deep ocean to the surface somewhere. This process is called upwelling.

Generally, upwelling occurs along the coast when wind blows water strongly away from the shore. This leaves a void that is filled by deep water that rises to the surface. Upwelling is extremely important where it occurs. During its time on the bottom, the cold deep water has collected nutrients that have fallen down through the water column. Upwelling brings those nutrients to the surface. Those nutrient support the growth of plankton and form the base of a rich ecosystem. California, South America, South Africa, and the Arabian Sea all benefit from offshore upwelling.