Although this may seem surprising, water beneath the ground is commonplace. Usually groundwater travels slowly and silently beneath the surface, but in some locations it bubbles to the surface at springs. The products of erosion and deposition by groundwater were described in the Erosion and Deposition chapter. Groundwater is the largest reservoir of liquid fresh water on Earth and is found in aquifers, porous rock and sediment with water in between. Water is attracted to the soil particles and capillary action, which describes how water moves through a porous media, moves water from wet soil to dry areas.

The residence time of water in a groundwater aquifer can be from minutes to thousands of years. Groundwater is often called “fossil water” because it has remained in the ground for so long, often since the end of the ice ages.
Features of an Aquifer

To be a good aquifer, it must have good:

Th Environmental Protection Agency (EPA) has an animation to help people better understand aquifers. The water droplets are found in the pores between the sediment grains, which is porosity. When the water can travel between ores, that’s permeability. To reach an aquifer, surface water infiltrates downward into the ground through tiny spaces or pores in the rock. The water travels down through the permeable rock until it reaches a layer that does not have pores; this rock is impermeable. This impermeable rock layer forms the base of the aquifer. The upper surface where the groundwater reaches is the water table.

For a groundwater aquifer to contain the same amount of water, the amount of recharge must equal the amount of discharge. What are the likely sources of recharge? What are the likely sources of discharge?In wet regions, streams are fed by groundwater; the surface of the stream is the top of the water table. In dry regions, water seeps down from the stream into the aquifer. These streams are often dry much of the year. Water leaves a groundwater reservoir in streams or springs. People take water from aquifers, too.What happens to the water table when there is a lot of rainfall? What happens when there is a drought? Although groundwater levels do not rise and fall as rapidly as at the surface, over time the water table will rise during wet periods and fall during droughts.

Click here to view another animation EPA on the water table.One of the most interesting, but extremely atypical types of aquifers is found in Florida. Although aquifers are very rarely underground rivers, in Florida water has dissolved the limestone so that streams travel underground and aboveground. 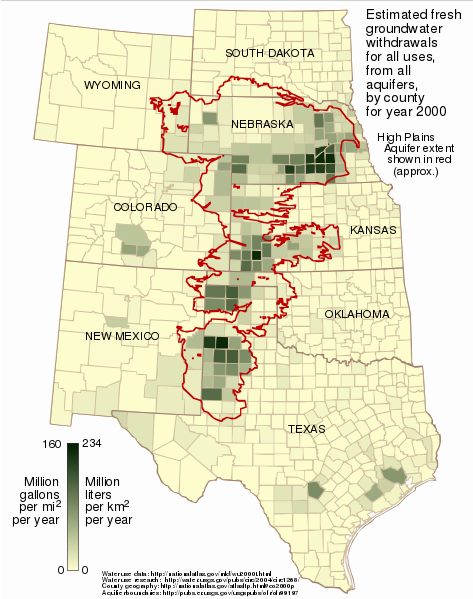 Groundwater is an extremely important water source for people. Groundwater is a renewable resource and its use is sustainable when the water pumped from the aquifer is replenished. It is important for anyone who intends to dig a well to know how deep beneath the surface the water table is. Because groundwater involves interaction between the Earth and the water, the study of groundwater is called hydrogeology.Some aquifers are overused; people pump out more water than is replaced. As the water is pumped out, the water table slowly falls, requiring wells to be dug deeper, which takes more money and energy. Wells may go completely dry if they are not deep enough to reach into the lowered water table.The Ogallala Aquifer supplies about one-third of the irrigation water in the United States. The aquifer is found from 30 to 100 meters deep over about 440,000 square kilometers! The water in the aquifer is mostly from the last ice age. The Ogallala Aquifer is widely used by people for municipal and agricultural needs. About eight times more water is taken from the Ogallala Aquifer each year than is replenished. Much of the water is used for irrigation of crops in the Bread Basket of the central plains. Currently there is great concern about the longterm health of this vast aquifer because it is being tapped into and used at a greater rate than being replenished by natural processes. This could have huge implications in regards to food production in the country if this critical water source is depleted. At current rates of use, 70 percent of the aquifer could be gone by 2050.

Click here to learn more.Overuse and lowering of the water tables of aquifers could have other impacts as well. Lowering the water table may cause the ground surface to sink. Subsidence may occur beneath houses and other structures. When coastal aquifers are overused, salt water from the ocean may enter the aquifer, contaminating the aquifer and making it less useful for drinking and irrigation. Salt water incursion is a problem in developed coastal regions, such as on Hawaii.

Groundwater meets the surface in a stream, as shown below, or a spring. A spring may be constant, or may only flow at certain times of year. Towns in many locations depend on water from springs. Springs can be an extremely important source of water in locations where surface water is scarce.

Finally, it’s also important to understand how water is cleaned, filtered, and delivered to our homes and work. To many of us do not know where our water comes from and we take it for granted. This often times leads to wasteful water use of our lawns, showers, and other appliances. Again, click here to learn more from the EPA about water is treated before reaching us.