Subsidence occurs when loose, water saturated sediment begins to compact causing the ground surface to collapse. Now there are two types of subsidence. 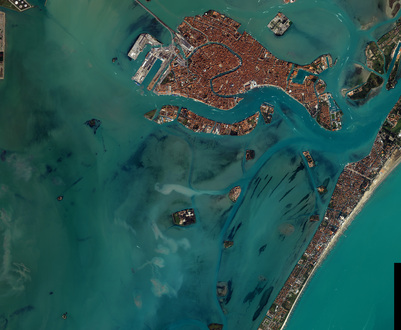 Slow subsidence occurs when the water within the sediment is slowly squeezed out because of overlying weight. There are several examples of slow subsidence, but the best one is Venice, Italy. Venice (image on the right) was built at sea level on the now submerged delta of the Brenta River. The city is sinking because of the overlying weight of the city and pumping of ground water. The problem now is that sea levels are rising as glaciers melt and water expands due to global warming. An example of slow subsidence in the U.S. includes New Orleans, Louisiana. As we all know from Hurricane Katrina, the Mississippi River has a vast network of levees that prevent the massive river from flooding – most of the time. But by preventing the spring-time flooding, we are preventing the river from depositing sediment onto the land. Instead, the sediment is being transported to the Gulf of Mexico creating the massive Mississippi delta. 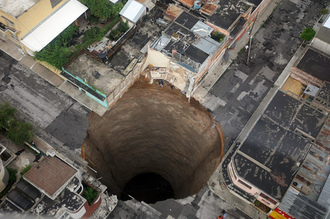 Fast subsidence occurs when naturally acidic water begins to dissolve limestone rock to forma a network of water-filled underground caverns. But if droughts or pumping of ground water reduces the water table below the level of the caves, they caverns collapse creating surface sinkholes.A dramatic example of fast subsidence occurred in Guatemala City in 2007 when a massive sinkhole formed 300 feet deep. As noted above, the underground region surrounding Guatemala is composed of limestone that and a vast underground network of caverns. It is believed that the water table has been dropping in the region and thus draining the caves. Afterward the caves can not support the overlying weight and collapse in.