When two air masses meet together, the boundary between the two is called a weather front. At a front, the two air masses have different densities, based on temperature, and do not easily mix. One air mass is lifted above the other, creating a low pressure zone. If the lifted air is moist, there will be condensation and precipitation. Winds are common at a front. The greater the temperature difference between the two air masses, the stronger the winds will be. Fronts are the main cause of stormy weather.

At a stationary front the air masses do not move. A front may become stationary if an air mass is stopped by a barrier, such as a mountain range.

A stationary front may bring days of rain, drizzle, and fog. Winds usually blow parallel to the front, but in opposite directions. After several days, the front will likely break apart. When a cold air mass takes the place of a warm air mass, there is a cold front. 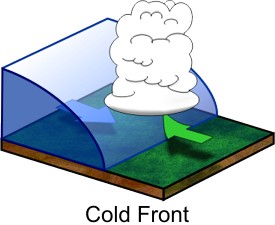 Imagine that you are standing in one spot as a cold front approaches. Along the cold front, the denser, cold air pushes up the warm air, causing the air pressure to decrease. If the humidity is high enough, some types of cumulus clouds will grow. High in the atmosphere, winds blow ice crystals from the tops of these clouds to create cirrostratus and cirrus clouds. At the front, there will be a line of rain showers, snow showers, or thunderstorms with blustery winds. A squall line is a line of severe thunderstorms that forms along a cold front. Behind the front is the cold air mass. This mass is drier so precipitation stops. The weather may be cold and clear or only partly cloudy. Winds may continue to blow into the low pressure zone at the front. The weather at a cold front varies with the season. 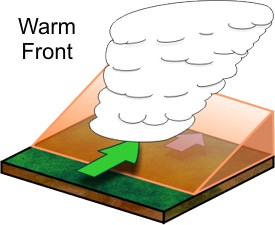 Along a warm front, a warm air mass slides over a cold air mass. When warm, less dense air moves over the colder, denser air, the atmosphere is relatively stable. Imagine that you are on the ground in the wintertime under a cold winter air mass with a warm front approaching. The transition from cold air to warm air takes place over a long distance so the first signs of changing weather appear long before the front is actually over you.

An occluded front usually forms around a low pressure system. The occlusion starts when a cold front catches up to a warm front. The air masses, in order from front to back, are cold, warm, and then cold again. 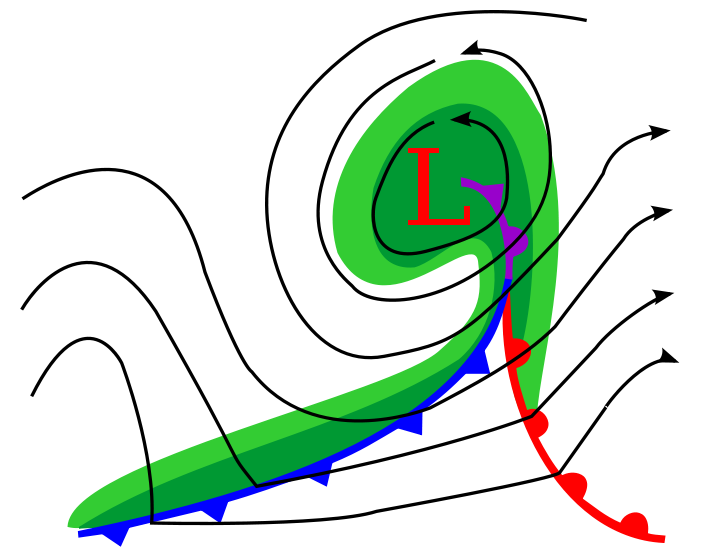 Coriolis Effect curves the boundary where the two fronts meet towards the pole. If the air mass that arrives third is colder than either of the first two air masses, that air mass slip beneath them both. This is called a cold occlusion. If the air mass that arrives third is warm, that air mass rides over the other air mass. This is called a warm occlusion.The weather at an occluded front is especially fierce right at the occlusion. Precipitation and shifting winds are typical. The Pacific Coast has frequent occluded fronts.

Remember, a weather front is basically the boundary between two air masses of different densities. At the center of each air mass is typically a high pressure. This means that weather is typically sunny within air masses, but their temperatures could vary with the season and humidity could vary based on the source region of the air mass.

Now more often than not, these weather fronts are not isolated events. Often times, they are part of a larger rotating system called a mid-latitude cyclone. This type of cyclone will be discussed later in this chapter, but as an introduction it is a low pressure system that is usually mixing warmer air from the south (in the Northern Hemisphere) and colder air from the north.