The film won the Documentary Directing Award at the 2005 Sundance Film Festival.

The Devil and Daniel Johnston is a 2005 documentary film about American musician Daniel Johnston. It chronicles Johnston’s life from childhood up to the present, with an emphasis on his experiences with bipolar disorder, and how it manifested itself in demonic self-obsession.

Daniel Dale Johnston (January 22, 1961 – September 11, 2019) was an American singer-songwriter and visual artist regarded as a significant figure in outsider, lo-fi, and alternative music scenes. Most of his work consisted of cassettes recorded alone in his home, ( see the short film below)  and his music was frequently cited for its “pure” and “childlike” qualities.

Johnston spent extended periods in psychiatric institutions and was diagnosed with schizophrenia as well as bipolar disorder. He gathered a local following in the 1980s by passing out tapes of his music while working at a McDonald’s in Austin, Texas. His cult status was propelled when Nirvana’s Kurt Cobain was seen wearing a T-shirt that featured artwork from Johnston’s 1983 album Hi, How Are You.

Beyond music, Johnston was accomplished as a visual artist, with his illustrations exhibited at various galleries around the world. In 2005, his struggles with mental illness was the subject of the documentary The Devil and Daniel Johnston. He died in 2019 of what is suspected to have been a heart attack. 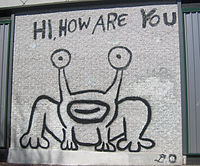 Johnston’s “Hi, How Are You” mural in Austin, Texas.

In 1990, Johnston played at a music festival in Austin, Texas. On the way back to West Virginia on a private two-seater plane piloted by his father Bill, Johnston had a manic psychotic episode; believing he was Casper the Friendly Ghost, Johnston removed the key from the plane’s ignition and threw it outside. His father, a former U.S. Air Force pilot, managed to successfully crash-land the plane, even though “there was nothing down there but trees”. Although the plane was destroyed, Johnston and his father emerged with only minor injuries. As a result of this episode, Johnston was involuntarily committed to a mental hospital.

Interest in Johnston increased when Kurt Cobain was frequently photographed wearing a T-shirt featuring the cover image of Johnston’s album Hi, How Are You that music journalist Everett True gave him.  Cobain listed Yip/Jump Music as one of his favorite albums in his journal in 1993. In spite of Johnston being resident in a mental hospital at the time, there was a bidding war to sign him. He refused to sign a multi-album deal with Elektra Records because Metallica was on the label’s roster and he was convinced that they were Satanic and would hurt him.

In 1993, the Sound Exchange record store in Austin, Texas, commissioned Johnston to paint a mural of the Hi, How Are You? frog (also known as “Jeremiah the Innocent”) from the album’s cover. After the record store closed in 2003, the building remained unoccupied until 2004 when the Mexican grill franchise Baja Fresh took ownership and decided that they would remove the wall that held the mural. A group of people who lived in the neighborhood convinced the managers and contractors to keep the mural intact. In 2018, the building housed a Thai restaurant called “Thai, How Are You”. Thai How Are You permanently closed in January of 2020. The building remains empty. 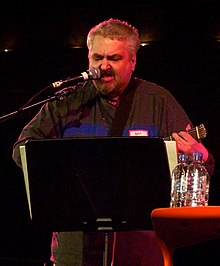 In 2006, Jeff Feuerzeig released a documentary about Johnston, The Devil and Daniel Johnston; the film, four years in the making, collated some of the vast amount of recorded material Johnston (and in some case, others) had produced over the years to portray his life and music.

The film also inspired more interest in Johnston’s work, and increased his prestige as a touring artist. In 2006, Johnston’s label, Eternal Yip Eye Music, released his first greatest-hits compilation, Welcome to My World.

Through the next few years Johnston toured extensively across the world, and continued to attract press attention. On March 13, 2012, Johnston released his first comic book, Space Ducks – An Infinite Comic Book of Musical Greatness at SXSW, published by BOOM! Studios. The comic book ties-in with the Space Ducks album and an iOS app. Johnston collaborated with skateboarding and clothing company Supreme on numerous collections (consisting of clothing and various accessories) showcasing his artwork.

In November 2015, Hi, How Are You Daniel Johnston?, a short biopic about Johnston’s life, was released featuring Johnston as his 2015 self and Gabriel Sunday of Archie’s Final Project as Johnston’s 1983 self (see below).

In July 2017, Johnston announced that he would be retiring from live performance and would embark on a final five-date tour that fall.

On September 11, 2019, Johnston was found dead from a suspected heart attack at his home in Waller, Texas, a day after he was released from the hospital for unspecified kidney problems. It is believed that he died overnight.