1. Overview to Understanding Abnormal Behavior & Introduction and Methods of Research

This study was carried out by David Rosenhan. It is a famous naturalistic observation with aspects of a field experiment included. The Rosenhan experiment or Thud experiment was an experiment conducted to determine the reliability and validity of psychiatric diagnosis. The experimenters feigned hallucinations to enter psychiatric hospitals, and acted normally afterwards. They were diagnosed with psychiatric disorders and were given antipsychotic drugs. The study was conducted by psychologist David Rosenhan, a Stanford University professor, and published by the journal Science in 1973 under the title “On being sane in insane places”. It is considered an important and influential criticism of psychiatric diagnosis. It has been argued that the experiment was fabricated. 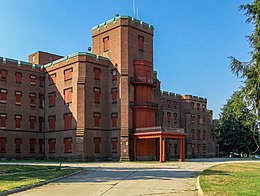 The main building of St Elizabeths Hospital (1996), located in Washington, D.C., now boarded up and abandoned, was one of the sites of the Rosenhan experiment. Rosenhan’s study was done in eight parts. The first part involved the use of healthy associates or “pseudopatients” (three women and five men, including Rosenhan himself) who briefly feigned auditory hallucinations in an attempt to gain admission to 12 psychiatric hospitals in five states in the United States. All were admitted and diagnosed with psychiatric disorders. After admission, the pseudopatients acted normally and told staff that they felt fine and had no longer experienced any additional hallucinations. All were forced to admit to having a mental illness and had to agree to take antipsychotic drugs as a condition of their release. The average time that the patients spent in the hospital was 19 days. All but one were diagnosed with schizophrenia “in remission” before their release.

The second part of his study involved an offended hospital administration challenging Rosenhan to send pseudopatients to its facility, whom its staff would then detect. Rosenhan agreed and in the following weeks out of 250 new patients the staff identified 41 as potential pseudopatients, with 2 of these receiving suspicion from at least one psychiatrist and one other staff member. In fact, Rosenhan had sent no pseudopatients to the hospital.

While listening to a lecture by R. D. Laing, who was associated with the anti-psychiatry movement, Rosenhan conceived of the experiment as a way to test the reliability of psychiatric diagnoses. Laing’s lectures on the anti-psychiatry movement: Laing argued that schizophrenia was “a theory not a fact” and rejected “the medical model of mental illness“, especially the use of drugs.

The study concluded “it is clear that we cannot distinguish the sane from the insane in psychiatric hospitals” and also illustrated the dangers of dehumanization and labeling in psychiatric institutions. It suggested that the use of community mental health facilities which concentrated on specific problems and behaviors rather than psychiatric labels might be a solution, and recommended education to make psychiatric workers more aware of the social psychology of their facilities.

Here is a 7-minute video summing up the study.

However, Rosenhan wasn’t the only critic of psychiatry at the time. Two years after Rosenhan, “One Flew Over The Cuckoo’s Nest” (1975) dramatised many of the same problems in mental health care. It won the Best Film Oscar. See the trailer below.