In the example on the previous page, we saw how combining the formulas for different shapes provides a way to accurately predict the amount of paint needed for a construction project. The result was a polynomial.

A polynomial function is a function consisting of the sum or difference of terms in which each term is a real number, a variable, or the product of a real number and variable(s) with a non-negative integer exponents. Non negative integers are [latex]0, 1, 2, 3, 4[/latex], …
You may see a resemblance between expressions and polynomials which we have been studying in this course.  Polynomials are a special sub-group of mathematical expressions and equations.

The following table is intended to help you tell the difference between what is a polynomial and what is not.

The basic building block of a polynomial is a monomial. A monomial is one term and can be a number, a variable, or the product of a number and variable(s) with an exponent. The number part of the term is called the coefficient. 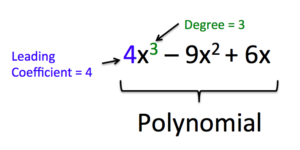 How to: Given a polynomial expression, identify the degree and leading coefficient

For the following polynomials, identify the degree, the leading term, and the leading coefficient.

In the following video, we will identify the terms, leading coefficient, and degree of a polynomial.

The table below illustrates some examples of monomials, binomials, trinomials, and other polynomials. They are all written in standard form.

Substitute [latex]-1[/latex] for each x in the polynomial.

Substitute [latex]3[/latex] for each p in the polynomial.

Following the order of operations, evaluate exponents first and then multiply.

Add and then subtract to get [latex]-3[/latex].

In the following video, we show more examples of evaluating polynomials for given values of the variable.