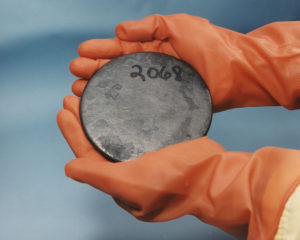 One such application is called half-life, which refers to the amount of time it takes for half a given quantity of radioactive material to decay. The table below lists the half-life for several of the more common radioactive substances.

We can see how widely the half-lives for these substances vary. Knowing the half-life of a substance allows us to calculate the amount remaining after a specified time. We can use the formula for radioactive decay: 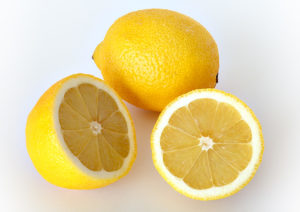 In chemistry, pH is used as a measure of the acidity or alkalinity of a substance. The pH scale runs from [latex]0[/latex] to [latex]14[/latex]. Substances with a pH less than [latex]7[/latex] are considered acidic, and substances with a pH greater than [latex]7[/latex] are said to be alkaline. In our next example, we will find how doubling the concentration of hydrogen ions in a liquid affects pH.

In chemistry, [latex]\text{pH}=-\mathrm{log}\left[{H}^{+}\right][/latex]. If the concentration of hydrogen ions in a liquid is doubled, what is the effect on pH?

Using the product rule of logs:

When the concentration of hydrogen ions is doubled, the pH decreases by about 0.301. 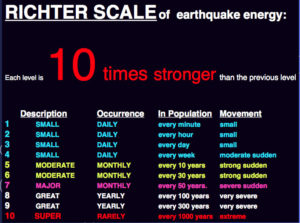 The Richter Scale of earthquake energy.

The Richter scale is a logarithmic function that is used to measure the magnitude of earthquakes. The magnitude of an earthquake is related to how much energy is released by the quake. Instruments called seismographs detect movement in the earth; the smallest movement that can be detected shows on a seismograph as a wave with amplitude [latex]A_{0}[/latex].

From this you can find R, the Richter scale measure of the magnitude of the earthquake using the formula:

The intensity of an earthquake will typically measure between [latex]2[/latex] and [latex]10[/latex] on the Richter scale. Any earthquakes registering below a [latex]5[/latex] are fairly minor; they may shake the ground a bit but are seldom strong enough to cause much damage. Earthquakes with a Richter rating between [latex]5[/latex] and [latex]7.9[/latex] are much more severe, and any quake above an [latex]8[/latex] is likely to cause massive damage. (The highest rating ever recorded for an earthquake is [latex]9.5[/latex] during the [latex]1960[/latex] Valdivia earthquake in Chile.)

An earthquake is measured with a wave amplitude [latex]392[/latex] times as great as [latex]A_{0}[/latex]. What is the magnitude of this earthquake, to the nearest tenth, using the Richter scale?

Use the Richter scale equation.

Simplify the argument of the logarithm, and then use a calculator to evaluate.

The earthquake registered [latex]2.6[/latex] on the Richter scale.

A difference of [latex]1[/latex] point on the Richter scale equates to a [latex]10[/latex]-fold difference in the amplitude of the earthquake (which is related to the wave strength). This means that an earthquake that measures [latex]3.6[/latex] on the Richter scale has [latex]10[/latex] times the amplitude of one that measures [latex]2.6[/latex].

In the following video, we show another example of how to calculate the magnitude of an earthquake. 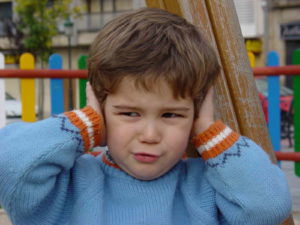 Logarithms can be used to measure how loud sound is.

Sound is measured in a logarithmic scale using a unit called a decibel. The formula looks similar to the Richter scale:

where P is the power or intensity of the sound and[latex]P_0[/latex] is the weakest sound that the human ear can hear. In the next example we will find how much more intense the noise from a dishwasher is than the noise from a hot water pump.

Divide both sides of the equation by [latex]10[/latex] to get the log by itself.

Rewrite the equation as an exponential equation.

Solve for h, the intensity of the water pump.

The following video provides another example of comparing the intensity of two sounds.

Applications of logarithms and exponentials are everywhere in science. We hope the examples here have given you an idea of how useful they can be.