Why It Matters: Polynomials

Why Learn About Polynomials?

If you have ever watched a Pixar movie, you have seen computer generated images.  A very common method for generating graphics with a computer is to use what is called a wire mesh.  You can think of a wire mesh as a grid – like the ones we have used to graph lines – that has been bent and stretched to make a shape we want as in the image of a dolphin below. 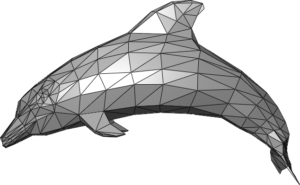 The dolphin in the image was created by plotting points in space to create connected triangles.  This method of rendering graphics works well and is in wide use, but it takes a lot of computer memory. Recently, researchers have been investigating the use of polynomials for rendering graphics in part because it demands less memory in the process.[1].  In this process, the surfaces that are rendered are made from solutions to algebraic polynomials. Below are images of smooth-surfaced objects that were rendered using polynomials by researchers Charles Loop and Jim Blinn from Microsoft.

In this module, you will learn how to identify a polynomial and how to perform algebraic operations on them. Like the linear equations and inequalities you learned about earlier, polynomials are useful in many applications of mathematics as well as in other disciplines like biology, economics, and even cryptology. Gaining a basic understanding of their qualities and how the rules of algebra we have learned so far apply to them will help you learn how to use polynomials both inside and out of your math class.

In your next math class you will likely learn how to solve certain kinds of polynomials and how to graph them as well.