A System of Symbols

Symbols are arbitrary representations of thoughts, ideas, emotions, objects, or actions used to encode and decode meaning (Nelson & Kessler Shaw). Symbols stand for, or represent, something else. For example, there is nothing inherent about calling a cat a cat.

Rather, English speakers have agreed that these symbols (words), whose components (letters) are used in a particular order each time, stand for both the actual object, as well as our interpretation of that object. This idea is illustrated by C. K. Ogden and I. A. Richard’s triangle of meaning. The word “cat” is not the actual cat. Nor does it have any direct connection to an actual cat. Instead, it is a symbolic representation of our idea of a cat, as indicated by the line going from the word “cat” to the speaker’s idea of “cat” to the actual object. 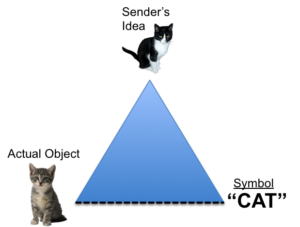 Symbols have three distinct qualities: they are arbitrary, ambiguous, and abstract. Notice that the picture of the cat on the left side of the triangle more closely represents a real cat than the word “cat.” However, we do not use pictures as language, or verbal communication. Instead, we use words to represent our ideas. This example demonstrates our agreement that the word “cat” represents or stands for a real cat AND our idea of a cat. The symbols we use are arbitrary and have no direct relationship to the objects or ideas they represent. We generally consider communication successful when we reach agreement on the meanings of the symbols we use (Duck).

Not only are symbols arbitrary, they are ambiguous — that is, they have several possible meanings. Imagine your friend tells you she has an apple on her desk. Is she referring to a piece of fruit or her computer? If a friend says that a person he met is cool, does he mean that person is cold or awesome? The meanings of symbols change over time due to changes in social norms, values, and advances in technology. You might be asking, “If symbols can have multiple meanings then how do we communicate and understand one another?” We are able to communicate because there are a finite number of possible meanings for our symbols, a range of meanings which the members of a given language system agree upon. Without an agreed-upon system of symbols, we could share relatively little meaning with one another.

A simple example of ambiguity can be represented by one of your classmates asking a simple question to the teacher during a lecture where she is showing PowerPoint slides: “can you go to the last slide please?” The teacher is half way through the presentation. Is the student asking if the teacher can go back to the previous slide? Or does the student really want the lecture to be over with and is insisting that the teacher jump to the final slide of the presentation? Chances are the student missed a point on the previous slide and would like to see it again to quickly take notes. However, suspense may have overtaken the student and they may have a desire to see the final slide. Even a simple word like “last” can be ambiguous and open to more than one interpretation.

The verbal symbols we use are also abstract, meaning that, words are not material or physical. A certain level of abstraction is inherent in the fact that symbols can only represent objects and ideas. This abstraction allows us to use a phrase like “the public” in a broad way to mean all the people in the United States rather than having to distinguish among all the diverse groups that make up the U.S. population. Similarly, in J.K. Rowling’s Harry Potter book series, wizards and witches call the non-magical population on earth “muggles” rather than having to define all the separate cultures of muggles. Abstraction is helpful when you want to communicate complex concepts in a simple way. However, the more abstract the language, the greater potential there is for confusion.

Verbal communication is rule-governed. We must follow agreed-upon rules to make sense of the symbols we share. Let’s take another look at our example of the word cat. What would happen if there were no rules for using the symbols (letters) that make up this word? If placing these symbols in a proper order was not important, then cta, tac, tca, act, or atc could all mean cat. Even worse, what if you could use any three letters to refer to cat? Or still worse, what if there were no rules and anything could represent cat? Clearly, it’s important that we have rules to govern our verbal communication. There are four general rules for verbal communication, involving the sounds, meaning, arrangement, and use of symbols.

Sounds and Letters: A Poem for English Students

When in English class we speak,
Why is break not rhymed with freak?
Will you tell me why it’s true
That we say sew, but also few?

Cow is cow, but low is low
Shoe is never rhymed with toe.
Think of nose and dose and lose
Think of goose, but then of choose.

Confuse not comb with tomb or bomb,
Doll with roll, or home with some.
We have blood and food and good.
Mould is not pronounced like could.

There’s pay and say, but paid and said.
“I will read”, but “I have read”.
Why say done, but gone and lone –
Is there any reason known?

To summarise, it seems to me
Sounds and letters disagree.

It is only through an agreed-upon and rule-governed system of symbols that we can exchange verbal communication in an effective manner. Without agreement, rules, and symbols, verbal communication would not work. The reality is, after we learn language in school, we don’t spend much time consciously thinking about all of these rules, we simply use them. However, rules keep our verbal communication structured in ways that make it useful for us to communicate more effectively.

We all know we can look up words in the dictionary, such as Webster’s Dictionary. When we do this, we are looking up the Denotative Meaning of words. However, given that there are so many Connotative Meanings of words, we now have a resource to look up those meanings as well. Urban Dictionary is a resource for people to find out how words that have certain denotative meanings are used connotatively. Go ahead, give it a try!