Theories in the Empirical Laws Paradigm approach Communication from the perspective that there are universal laws that govern how we communicate. Other names for Empirical Laws include: hard science, the positivist approach, the covering-laws approach, and the classical approach. Natural scientists look for universal laws to understand and explain our world. 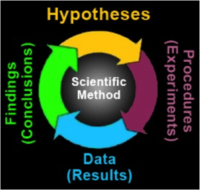 Using our example of gravity, we know that objects fall to the earth 100% of the time when we drop them. This is a universal law. As Chapter 2 showed, in the late 1950’s scholars began studying human communication using approaches developed in the natural sciences (aka the Scientific Method). Thus, early proponents of Empirical Laws theories studied communication to see if there were universal communication laws similar to those in the natural world.

Natural laws at work in our world influence every moment of our lives. Every time you fly in an airplane or cross a bridge you trust that the people who designed and built the plane and bridge followed the physical laws that allow a plane to fly and a bridge to span a distance without collapsing. Every time you press the brakes on a car you trust them to slow you down based on the laws explaining how long a mass, traveling at a certain speed, takes to stop. Even if you do not understand all of these laws, you live by them and believe the laws themselves hold true 100% of the time.

Are there laws you follow about communication with this kind of regularity? Are they applicable 100% of the time, in all situations, and with all people? What happens if someone breaks one of these laws? Are the consequences similar to when you break physical laws? For example, is the consequence for calling someone by the wrong name comparable to that of hitting your brakes and them not working?

Those who approach communication from an empirical laws perspective believe there are laws that govern human communication. The premise of this approach can be stated as a simple equation of causation: If X, then Y. For example, if I greet a person with “Hi, how are you?” then I anticipate a response, “Fine, how are you?” It’s likely that you conduct much of your communication using this equation. However, does that mean that it works all of the time?

Speech departments in the 1950s promoted the ancient rhetorical wisdom that persuasive discourse was a matter of an ethical speaker using logical arguments—‘‘the good man speaking well.”11 But younger faculty with training in the social sciences were no longer willing to accept this ‘‘truth” by faith. Armed with a scientific skepticism and new methods to assess attitudes, they put rhetorical principles to the test…

Aristotle, for example, wrote that ethos was a combination of a speaker’s intelligence, character, and goodwill toward the audience. Empirically oriented speech researchers subsequently discovered that audience rankings of “communicator credibility” did indeed include factors of competence (intelligence) and trustworthiness (character).12 But they found no evidence that audiences regarded goodwill or positive intentions as traits separate from character.

Scholars interested in this kind of study adopted the media-effects term communication research to distinguish their work from the historical-critical textual analysis of rhetoricians. In 1950 a group of communication researchers founded what is now the International Communication Association (ICA) as a science-based professional organization to rival the Speech Association of America, which was grounded in the humanities. Traditional speech teachers of this era often accused communication researchers of succumbing to ‘‘the law of the hammer.” This was a not-so-subtle dig at those who would pound away with newly acquired statistical tools no matter what the job required.

But irony did little to slow the radical transformation within the communication discipline….The empiricists continued to borrow their core ideas from other disciplines—especially social psychology. Indeed, five of the thirty-three communication theories in this book come from that specialized branch of psychology. Their common methodology and unity of world view gave social scientists in the communication field a greater impact than their numbers alone would indicate. In 1969, the SAA changed its name to the Speech Communication Association (SCA). The term communication in the title was tacit evidence that the scientific approach now dominated the discipline. At the start of the 1960s few departments that taught speech had the word communication as part of their title. By the mid 1970s there were few that didn’t.

There are three characteristics that help us understand empirical laws theories: causation, prediction, and generalization (Infante, Rancer & Womack). Causation states that there is a “cause and effect” relationship for all actions. In the physical world, if someone drops a pen it will fall. In human communication, if someone says “hello” to someone, that person responds. Prediction suggests that once someone determines a particular law is at work, they will use it to predict outcomes of communication situations. Have you ever rehearsed how you will ask someone out on a date and tried to predict the outcome?

What evidence did you use to make your prediction? In this example, you are using the “if X, then Y” equation to predict the outcome of the interaction. Generalization suggests that if a prediction shows that a behavior produces a certain outcome, we can generalize our predictions to include a wide variety of people, situations, and contexts. We make generalization such as, “If I’m friendly to others, they will be friendly to me” based on our past experiences with this type of behavior. However, this does not account for scenarios in which the person might not hear you, might be having a bad day and do not wish to respond, or assume you are talking to another person so they choose not to acknowledge you.

In the physical sciences, laws are absolute. This is comforting because it allows us to make informed decisions based on what we know about the laws that govern the world around us. In our example of gravity, we know that dropping an object will produce the same result every time. We could spend the rest of our lives testing this theory, but we don’t have to. We know what the result will be without having to continuously drop an object. Now, imagine what it would be like to always know what the outcome would be of every communication situation! Would that be comforting to you, or make your life boring?

Unlike the physical world, laws that govern human communication are not absolute and are most often bound by culture and context. Empirical laws theories are generally approached from the perspective of probability rather than absoluteness (Miller & Berger). Probability states that under certain conditions it is highly likely that we can predict communication outcomes. For example, when you greet someone with “hello” it is probable, not absolute, they will respond back with a greeting of their own. If they do not, you might run through a variety of reasons why the other person did not respond in accordance with the “laws” that govern greetings in our culture. Even though empirical laws theories do not produce absolutes about communication, we still use them in our everyday interactions with one another. Businesses, advertisers, schools, and other organizations use this approach to predict consumer, educational, and behavioral habits of particular demographic groups. While their approaches never produce a 100% cause-effect relationship, the information they gather helps them determine what actions to take to be successful in their communicative behaviors.

Hovland, Janis, and Kelley (1953) were some of the first to use empirical laws theories to explain communication. Their interests in mass communication and propaganda during World War II led them to study effective persuasion in mass communication and propaganda campaigns. They theorized that the more attractive a communicator, along with other traits, the more likely people would be persuaded. Their empirical laws theories still influence how a great deal of mass media is produced today. Think about movies, television shows, and advertisements you see. Are most of the people you watch in these mediums considered attractive and intelligent? Those who produce mass media use tremendous resources to research probabilistic empirical laws of human behavior before making decisions about what and who to include in their messages. On a smaller scale, we all use probabilistic empirical laws to govern, predict, and control our communication with others.

The area of leadership in group and organizational communication has a body of well-established empirical laws theories called the trait approaches. These theories suggest that there are certain physical, personality, and communicative characteristics that make one person more likely to be a leader over another (Northouse). Trait theories propose that people in western societies who are physically tall, charismatic, intelligent, white, and male are more likely to be leaders, be perceived as leaders, be placed in more leadership positions, and make better leaders than those who don’t exhibit these characteristics. You may be thinking, “But what about people like Mother Theresa, Mohatma Ghandi, Martin Luther King, Jr., Caeser Chavez, or Barack Obama?” This question brings up two important points. First, it shows that communication theories are not absolute. Second, it shows that some theoretical viewpoints may work to promote a certain worldview of those in positions of power, an idea we’ll explore more thoroughly when we look at the Critical Theories Paradigm. Despite feeling uncomfortable with some of the assumptions of trait theories, if you look at those in the highest levels of leadership in the U.S., the vast majority have characteristics described in trait theories.

A particular strength of empirical laws theories is that they help us determine cause and effect relationships in our communication with others. Understanding communication using these theories helps us predict the outcomes of our interactions with others. While we know that not all outcomes can be determined with 100% reliability, prediction and control allows us to more easily navigate our encounters. Think about the number of encounters you have each day in which you quickly predict and control your interaction with others. While not 100% conclusive, it’s comforting that a great number of our interactions have a certain level of probable outcomes.

A criticism of empirical laws theory is that while it is useful for understanding relatively simple interactions, it can oversimplify or fail to explain situations where a number of variables exist. Your classroom environment serves as a good example. While there are certain predictions you can make about how communication will occur in your classes, why is it that each classroom experience is unique? In your classrooms, it is impossible to predict, control, and generalize how a class will go with 100% accuracy because it is impossible to replicate classes in exactly the same ways. This approach does not account for the variety of human choices and behaviors that are brought into every communication context. It operates under the assumption that, given the same context, people bring the same things to the context each time. Obviously, this is not the case. Human behaviors are complex and cannot be predicted at a 100% accuracy rate. However, empirical laws theories work well for showing us patterns of behavior that guide our communication.