The Child Health and Development Studies investigate a range of topics. One study considered all pregnancies between 1960 and 1967 among women in the Kaiser Foundation Health Plan in the San Francisco East Bay area. Here, we study the relationship between smoking and weight of the baby. The variable smoke is coded 1 if the mother is a smoker, and 0 if not. The summary table below shows the results of a linear regression model for predicting the average birth weight of babies, measured in ounces, based on the smoking status of the mother.[1]

The variability within the smokers and non-smokers are about equal and the distributions are symmetric. With these conditions satisfied, it is reasonable to apply the model. (Note that we don’t need to check linearity since the predictor has only two levels.)

Exercise 1 introduces a data set on birth weight of babies. Another variable we consider is parity, which is 0 if the child is the first born, and 1 otherwise. The summary table below shows the results of a linear regression model for predicting the average birth weight of babies, measured in ounces, from parity.

We considered the variables smoke and parity, one at a time, in modeling birth weights of babies in Exercises 1 and 2. A more realistic approach to modeling infant weights is to consider all possibly related variables at once. Other variables of interest include length of pregnancy in days (gestation), mother’s age in years (age), mother’s height in inches (height), and mother’s pregnancy weight in pounds (weight). Below are three observations from this data set.

The summary table below shows the results of a regression model for predicting the average birth weight of babies based on all of the variables included in the data set.

Researchers interested in the relationship between absenteeism from school and certain demographic characteristics of children collected data from 146 randomly sampled students in rural New South Wales, Australia, in a particular school year. Below are three observations from this data set.

The summary table below shows the results of a linear regression model for predicting the average number of days absent based on ethnic background (eth: 0—aboriginal, 1—not aboriginal), sex (sex: 0—female, 1—male), and learner status (lrn: 0—average learner, 1—slow learner).[2]

A survey of 55 Duke University students asked about their GPA, number of hours they study at night, number of nights they go out, and their gender. Summary output of the regression model is shown below. Note that male is coded as 1.

Timber yield is approximately equal to the volume of a tree, however, thisvalue is difficult to measure without first cutting the tree down. Instead, other variables, such as height and diameter, may be used to predict a tree’s volume and yield. Researchers wanting to understand the relationship between these variables for black cherry trees collected data from 31 such trees in the Allegheny National Forest, Pennsylvania. Height is measured in feet, diameter in inches (at 54 inches above ground), and volume in cubic feet.[3]

Which, if any, variable should be removed from the model first?

Exercise 4 considers a model that predicts the number of days absent using three predictors: ethnic background (eth), gender (sex), and learner status (lrn). The table below shows the adjusted R-squared for the model as well as adjusted R-squared values for all models we evaluate in the first step of the backwards elimination process.

Which, if any, variable should be removed from the model first?

Exercise 3 provides regression output for the full model (including all explanatory variables available in the data set) for predicting birth weight of babies. In this exercise we consider a forward-selection algorithm and add variables to the model one-at-a-time. The table below shows the p-value and adjusted R2 of each model where we include only the corresponding predictor. Based on this table, which variable should be added to the model first?

Exercise 4 provides regression output for the full model, including all explanatory variables available in the data set, for predicting the number of days absent from school. In this exercise we consider a forward-selection algorithm and add variables to the model one-at-a-time. The table below shows the p-value and adjusted R2 of each model where we include only the corresponding predictor. Based on this table, which variable should be added to the model first?

Suppose a social scientist is interested in studying what makes audiences love or hate a movie. She collects a random sample of movies (genre, length, cast, director, budget, etc.) as well as a measure of the success of the movie (score on a film review aggregator website). If as part of her research she is interested in finding out which variables are significant predictors of movie success, what type of model selection method should she use?

Suppose an online media streaming company is interested in building a movie recommendation system. The website maintains data on the movies in their database (genre, length, cast, director, budget, etc.) and additionally collects data from their subscribers (demographic information, previously watched movies, how they rated previously watched movies, etc.). The recommendation system will be deemed successful if subscribers actually watch, and rate highly, the movies recommended to them. Should the company use the adjusted R2 or the p-value approach in selecting variables for their recommendation system?

Exercise 3 presents a regression model for predicting the average birth weight of babies based on length of gestation, parity, height, weight, and smoking status of the mother. Determine if the model assumptions are met using the plots below. If not, describe how to proceed with the analysis. 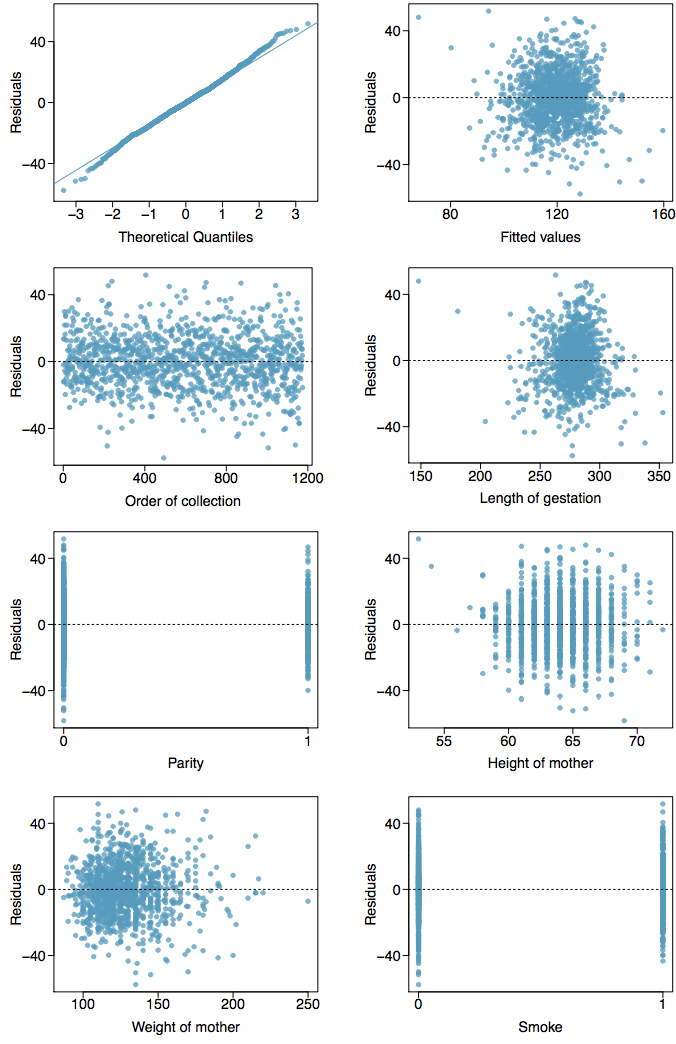 A regression model for predicting GPA from gender and IQ was fit, and both predictors were found to be statistically significant. Using the plots given below, determine if this regression model is appropriate for these data. 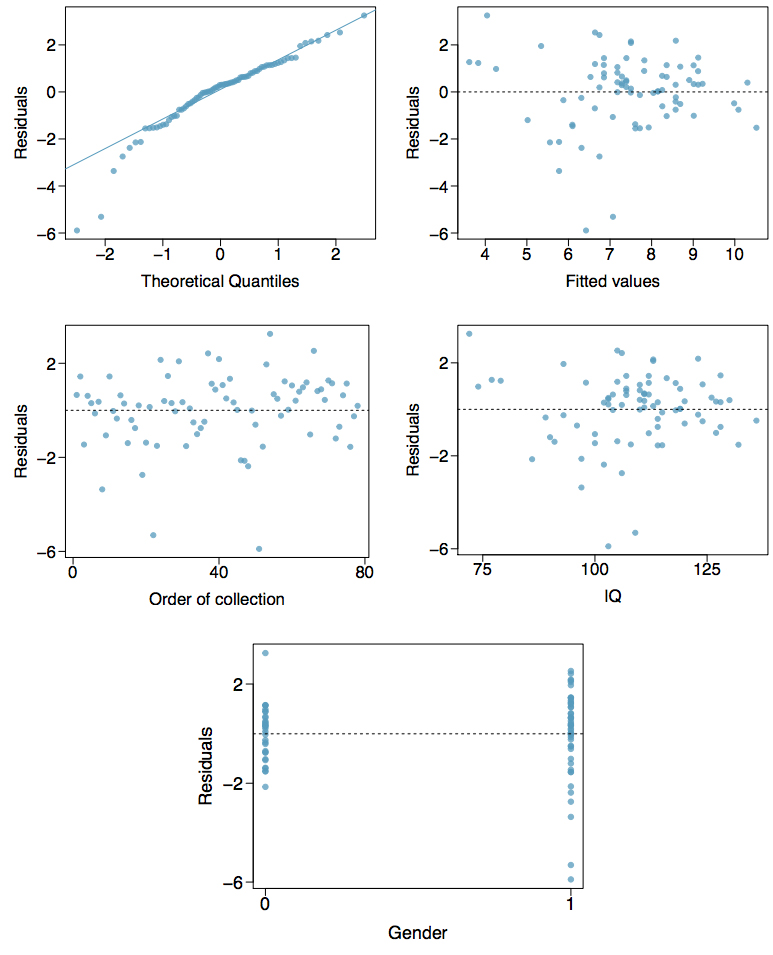 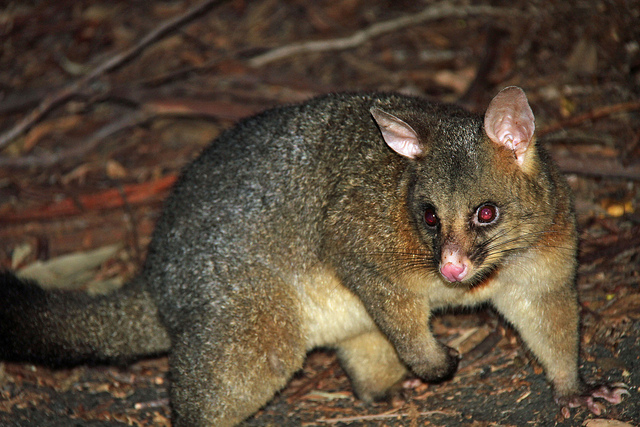 The common brushtail possum of the Australia region is a bit cuter than its distant cousin, the American opossum. We consider 104 brushtail possums from two regions in Australia, where the possums may be considered a random sample from the population. The first region is Victoria, which is in the eastern half of Australia and traverses the southern coast. The second region consists of New South Wales and Queensland, which make up eastern and northeastern Australia.

We use logistic regression to differentiate between possums in these two regions. The outcome variable, called population, takes value 1 when a possum is from Victoria and 0 when it is from New South Wales or Queensland. We consider five predictors: sex male (an indicator for a possum being male), head length, skull width, total length, and tail length. Each variable is summarized in a histogram. The full logistic regression model and a reduced model after variable selection are summarized in the table.

On January 28, 1986, a routine launch was anticipated for the Challenger space shuttle. Seventy-three seconds into the ﬂight, disaster happened: the shuttle broke apart, killing all seven crew members on board. An investigation into the cause of the disaster focused on a critical seal called an O-ring, and it is believed that damage to these O-rings during a shuttle launch may be related to the ambient temperature during the launch. The table below summarizes observational data on O-rings for 23 shuttle missions, where the mission order is based on the temperature at the time of the launch. Temp gives the temperature in Fahrenheit, Damaged represents the number of damaged O-rings, and Undamaged represents the number of O-rings that were not damaged.

A logistic regression model was proposed for classifying common brushtail possums into their two regions in Exercise 15. The outcome variable took value 1 if the possum was from Victoria and 0 otherwise.

Exercise 16 introduced us to O-rings that were identified as a plausible explanation for the breakup of the Challenger space shuttle 73 seconds into takeoff in 1986. The investigation found that the ambient temperature at the time of the shuttle launch was closely related to the damage of O-rings, which are a critical component of the shuttle. See this earlier exercise if you would like to browse the original data. 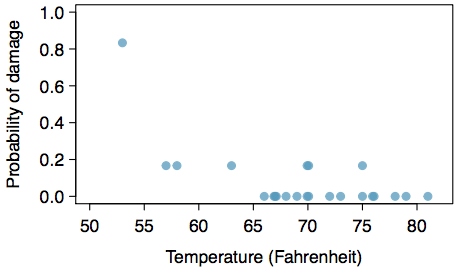