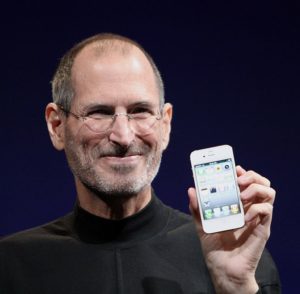 One of the most widely known and successful American entrepreneurs of all time is Steve Jobs. He is best known as the cofounder, chairman, and chief executive officer of Apple, Inc. He also cofounded Pixar Animation Studios, and he was a member of the board of directors of the Walt Disney Company. Four hundred eighty-four inventions bear Jobs’s name.

From early on in his life, Jobs was interested in electronics. When he was thirteen, for instance, he worked at the Hewlett Packard factory, which developed hardware and software components. Jobs later reflected on how he landed this job when he called Mr. Hewlett to ask for parts for an electronics project: “[Hewlett] didn’t know me at all, but he ended up giving me some parts and he got me a job that summer working at Hewlett-Packard on the line, assembling frequency counters . . . well, assembling may be too strong. I was putting in screws. It didn’t matter; I was in heaven.”

Jobs’s electronics and computing career quickly unfolded as he pursued his passion for creating and promoting computing products. At age nineteen, he was a technician for Atari, a leading electronics, gaming and home-computer corporation. By twenty-one, he and his two partners had formed Apple, Inc. At thirty-four, he was named “Entrepreneur of the Decade” by Inc. magazine. And at fifty-two, he was inducted into the California Hall of Fame by Governor Arnold Schwarzenegger.

All in all, Jobs was relentless about pursuing his interests and passions. The products he and his associates developed have transformed modern culture, including the iMac, iTunes, Apple Stores, the iPod, the iTunes Store, the iPhone, the App Store, the iPad, the Mac OS, and the Mac OS X.

Perhaps Steve Jobs never had a job he didn’t love. But he always had a career: pioneering the personal computer revolution.

This story of Steve Jobs’s professional pursuits illustrates a dream, a goal, and an ambition that many college students share: to be successful in earning money and finding personal satisfaction in employment.

In this section, we explore strategies that can help you chart your professional path and also attain ample reward. We begin by comparing and contrasting jobs and careers. We then look at how to match up your personal characteristics with a specific field or fields. We conclude by detailing a process for actually choosing your career. Throughout, you will find resources for learning more about this vast topic of planning for employment.

What is the difference between a job and a career? Do you plan to use college to help you seek one or the other?

There is no right or wrong answer, because motivations for being in college are so varied and different for each student. But you can take maximum advantage of your time in college if you develop a clear plan for what you want to accomplish. The table below shows some differences between a job and a career.

In summary, a job lets you enjoy at least a minimal level of financial security, and it requires you to show up and do what is required of you. In exchange, you get paid.

A career, on the other hand, is more of a means of achieving personal fulfillment through the jobs you hold. In a career, your jobs tend to follow a sequence that leads to increasing mastery, professional development, and personal and financial satisfaction. A career requires planning, knowledge, and skills, too. If it is to be a fulfilling career, it requires that you bring into play your full set of analytical, critical, and creative thinking skills. You will be called upon in a career to make informed decisions that will affect your life in both the short term and the long term.

The following video gives explicit, textbook-style distinctions between the terms job, work, and career. You may especially appreciate this video if English is a second language for you or if you are a first-generation college student.

The next video takes a different look at jobs and careers. The speaker discusses the more affective, emotional aspects of pursuing a career. His emphasis is on the importance of being passionate about your work.

Whether you pursue individual jobs or an extended career or both, your time with your employers will always comprise your individual journey. May your journey be as enjoyable and fulfilling as possible!