Biologists strive to understand the evolutionary history and relationships of members of the animal kingdom, and all of life, for that matter. The study of phylogeny aims to determine the evolutionary relationships between phyla. Currently, most biologists divide the animal kingdom into 35 to 40 phyla. Scientists develop phylogenetic trees, which serve as hypotheses about which species have evolved from which ancestors

Recall that until recently, only morphological characteristics and the fossil record were used to determine phylogenetic relationships among animals. Scientific understanding of the distinctions and hierarchies between anatomical characteristics provided much of this knowledge. Used alone, however, this information can be misleading. Morphological characteristics may evolve multiple times, and independently, through evolutionary history. Analogous characteristics may appear similar between animals, but their underlying evolution may be very different. With the advancement of molecular technologies, modern phylogenetics is now informed by genetic and molecular analyses, in addition to traditional morphological and fossil data. With a growing understanding of genetics, the animal evolutionary tree has changed substantially and continues to change as new DNA and RNA analyses are performed on additional animal species. 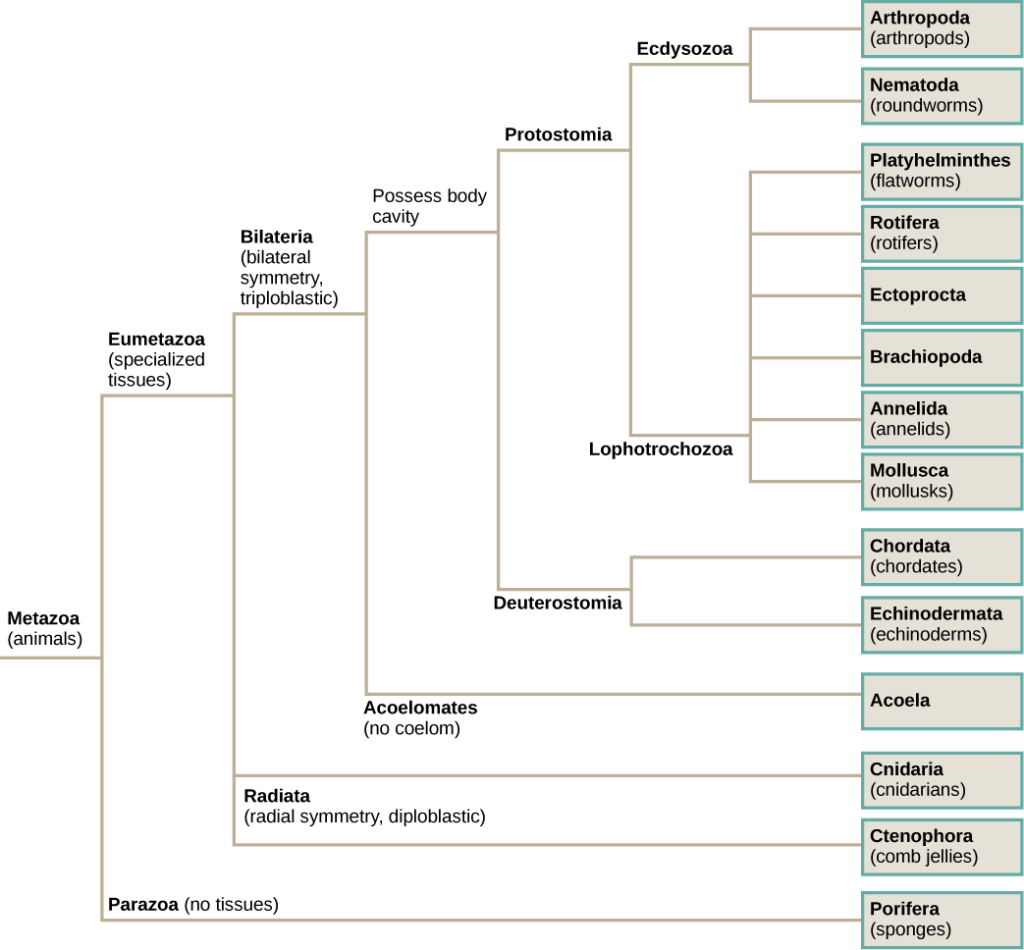 The current understanding of evolutionary relationships between animal, or Metazoa, phyla begins with the distinction between “true” animals with true differentiated tissues, called Eumetazoa, and animal phyla that do not have true differentiated tissues (such as the sponges), called Parazoa. Both Parazoa and Eumetazoa evolved from a common ancestral organism that resembles the modern-day protists called choanoflagellates. These protist cells strongly resemble the sponge choanocyte cells today (Figure 2).

Figure 2. Cells of the protist choanoflagellate resemble sponge choanocyte cells. Beating of choanocyte flagella draws water through the sponge so that nutrients can be extracted and waste removed.

Eumetazoa are subdivided into radially symmetrical animals and bilaterally symmetrical animals, and are thus classified into clade Bilateria or Radiata, respectively. As mentioned earlier, the cnidarians and ctenophores are animal phyla with true radial symmetry. All other Eumetazoa are members of the Bilateria clade. The bilaterally symmetrical animals are further divided into deuterostomes (including chordates and echinoderms) and two distinct clades of protostomes (including ecdysozoans and lophotrochozoans) (Figure 3). Ecdysozoa includes nematodes and arthropods; they are so named for a commonly found characteristic among the group: exoskeletal molting (termed ecdysis). Lophotrochozoa is named for two structural features, each common to certain phyla within the clade. Some lophotrochozoan phyla are characterized by a larval stage called trochophore larvae, and other phyla are characterized by the presence of a feeding structure called a lophophore.

Figure 3. Animals that molt their exoskeletons, such as these (a) Madagascar hissing cockroaches, are in the clade Ecdysozoa. (b) Phoronids are in the clade Lophotrochozoa. The tentacles are part of a feeding structure called a lophophore. (credit a: modification of work by Whitney Cranshaw, Colorado State University, Bugwood.org; credit b: modification of work by NOAA)

Explore an interactive tree of life here. Zoom and click to learn more about the organisms and their evolutionary relationships.

The phylogenetic groupings are continually being debated and refined by evolutionary biologists. Each year, new evidence emerges that further alters the relationships described by a phylogenetic tree diagram.

Watch the following video to learn how biologists use genetic data to determine relationships among organisms.

Nucleic acid and protein analyses have greatly informed the modern phylogenetic animal tree. These data come from a variety of molecular sources, such as mitochondrial DNA, nuclear DNA, ribosomal RNA (rRNA), and certain cellular proteins. Many evolutionary relationships in the modern tree have only recently been determined due to molecular evidence. For example, a previously classified group of animals called lophophorates, which included brachiopods and bryozoans, were long-thought to be primitive deuterostomes. Extensive molecular analysis using rRNA data found these animals to be protostomes, more closely related to annelids and mollusks. This discovery allowed for the distinction of the protostome clade, the lophotrochozoans. Molecular data have also shed light on some differences within the lophotrochozoan group, and some scientists believe that the phyla Platyhelminthes and Rotifera within this group should actually belong to their own group of protostomes termed Platyzoa.

Molecular research similar to the discoveries that brought about the distinction of the lophotrochozoan clade has also revealed a dramatic rearrangement of the relationships between mollusks, annelids, arthropods, and nematodes, and a new ecdysozoan clade was formed. Due to morphological similarities in their segmented body types, annelids and arthropods were once thought to be closely related. However, molecular evidence has revealed that arthropods are actually more closely related to nematodes, now comprising the ecdysozoan clade, and annelids are more closely related to mollusks, brachiopods, and other phyla in the lophotrochozoan clade. These two clades now make up the protostomes.