An antibody, also known as an immunoglobulin (Ig), is a protein that is produced by plasma cells after stimulation by an antigen. Antibodies are the functional basis of humoral immunity. Antibodies occur in the blood, in gastric and mucus secretions, and in breast milk. Antibodies in these bodily fluids can bind pathogens and mark them for destruction by phagocytes before they can infect cells.

An antibody molecule is comprised of four polypeptides: two identical heavy chains (large peptide units) that are partially bound to each other in a “Y” formation, which are flanked by two identical light chains (small peptide units), as illustrated in Figure 1. Bonds between the cysteine amino acids in the antibody molecule attach the polypeptides to each other. The areas where the antigen is recognized on the antibody are variable domains and the antibody base is composed of constant domains. 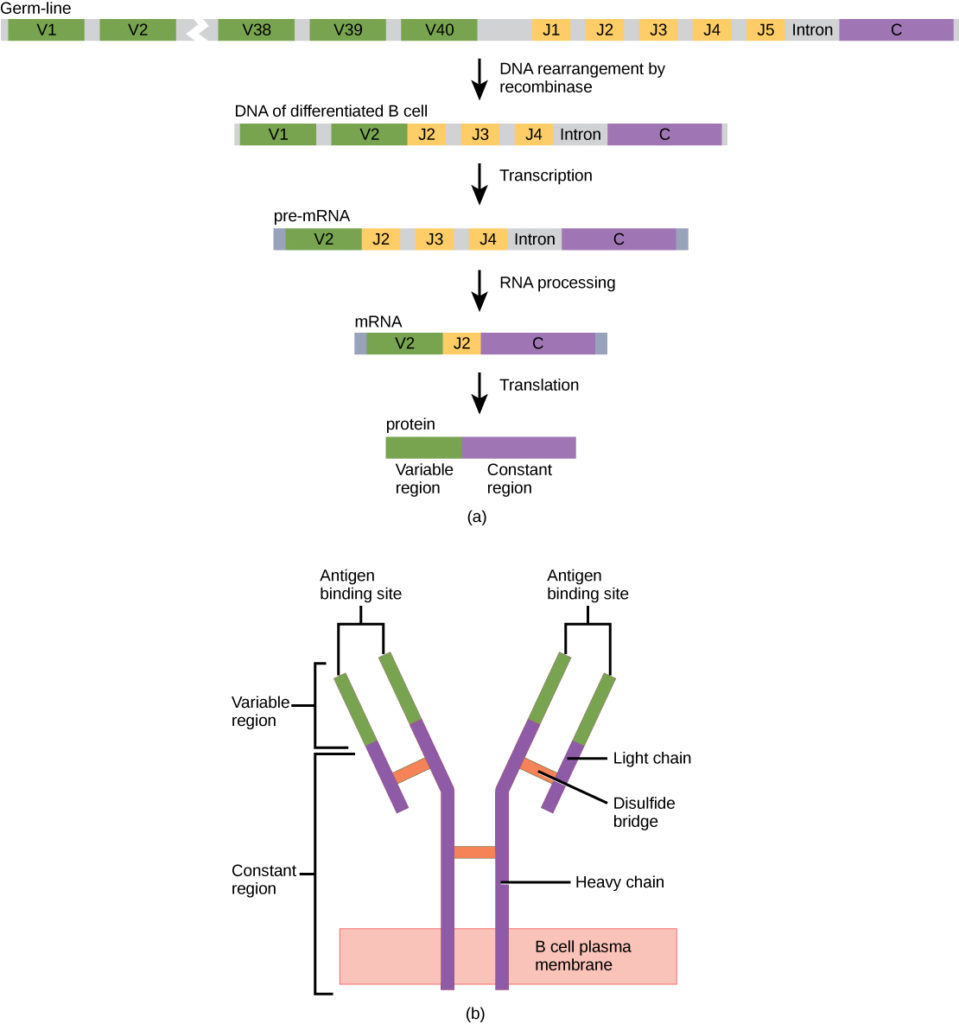 Figure 1. (a) As a germ-line B cell matures, an enzyme called DNA recombinase randomly excises V and J segments from the light chain gene. Splicing at the mRNA level results in further gene rearrangement. As a result, (b) each antibody has a unique variable region capable of binding a different antigen.

In germ-line B cells, the variable region of the light chain gene has 40 variable (V) and five joining (J) segments. An enzyme called DNA recombinase randomly excises most of these segments out of the gene, and splices one V segment to one J segment. During RNA processing, all but one V and J segment are spliced out. Recombination and splicing may result in over 106 possible VJ combinations. As a result, each differentiated B cell in the human body typically has a unique variable chain. The constant domain, which does not bind antibody, is the same for all antibodies.

Similar to TCRs and BCRs, antibody diversity is produced by the mutation and recombination of approximately 300 different gene segments encoding the light and heavy chain variable domains in precursor cells that are destined to become B cells. The variable domains from the heavy and light chains interact to form the binding site through which an antibody can bind a specific epitope on an antigen. The numbers of repeated constant domains in Ig classes are the same for all antibodies corresponding to a specific class. Antibodies are structurally similar to the extracellular component of the BCRs, and B cell maturation to plasma cells can be visualized in simple terms as the cell acquires the ability to secrete the extracellular portion of its BCR in large quantities.

Antibodies can be divided into five classes—IgM, IgG, IgA, IgD, IgE—based on their physiochemical, structural, and immunological properties. IgGs, which make up about 80 percent of all antibodies, have heavy chains that consist of one variable domain and three identical constant domains. IgA and IgD also have three constant domains per heavy chain, whereas IgM and IgE each have four constant domains per heavy chain. The variable domain determines binding specificity and the constant domain of the heavy chain determines the immunological mechanism of action of the corresponding antibody class. It is possible for two antibodies to have the same binding specificities but be in different classes and, therefore, to be involved in different functions.

After an adaptive defense is produced against a pathogen, typically plasma cells first secrete IgM into the blood. BCRs on naïve B cells are of the IgM class and occasionally IgD class. IgM molecules make up approximately ten percent of all antibodies. Prior to antibody secretion, plasma cells assemble IgM molecules into pentamers (five individual antibodies) linked by a joining (J) chain, as shown in Figure 2. The pentamer arrangement means that these macromolecules can bind ten identical antigens. However, IgM molecules released early in the adaptive immune response do not bind to antigens as stably as IgGs, which are one of the possible types of antibodies secreted in large quantities upon re-exposure to the same pathogen.

Immunoglobulins have different functions, but all are composed of light and heavy chains that form a Y-shaped structure. Table 1 summarizes the properties of immunoglobulins and illustrates their basic structures.

IgAs populate the saliva, tears, breast milk, and mucus secretions of the gastrointestinal, respiratory, and genitourinary tracts. Collectively, these bodily fluids coat and protect the extensive mucosa (4000 square feet in humans). The total number of IgA molecules in these bodily secretions is greater than the number of IgG molecules in the blood serum. A small amount of IgA is also secreted into the serum in monomeric form. Conversely, some IgM is secreted into bodily fluids of the mucosa. Similar to IgM, IgA molecules are secreted as polymeric structures linked with a J chain. However, IgAs are secreted mostly as dimeric molecules, not pentamers.

IgE is present in the serum in small quantities and is best characterized in its role as an allergy mediator. IgD is also present in small quantities. Similar to IgM, BCRs of the IgD class are found on the surface of naïve B cells. This class supports antigen recognition and maturation of B cells to plasma cells.

Differentiated plasma cells are crucial players in the humoral response, and the antibodies they secrete are particularly significant against extracellular pathogens and toxins. Antibodies circulate freely and act independently of plasma cells. Antibodies can be transferred from one individual to another to temporarily protect against infectious disease. For instance, a person who has recently produced a successful immune response against a particular disease agent can donate blood to a nonimmune recipient and confer temporary immunity through antibodies in the donor’s blood serum. This phenomenon is called passive immunity; it also occurs naturally during breastfeeding, which makes breastfed infants highly resistant to infections during the first few months of life.

Antibodies coat extracellular pathogens and neutralize them, as illustrated in Figure 3, by blocking key sites on the pathogen that enhance their infectivity (such as receptors that “dock” pathogens on host cells). Antibody neutralization can prevent pathogens from entering and infecting host cells, as opposed to the CTL-mediated approach of killing cells that are already infected to prevent progression of an established infection. The neutralized antibody-coated pathogens can then be filtered by the spleen and eliminated in urine or feces. 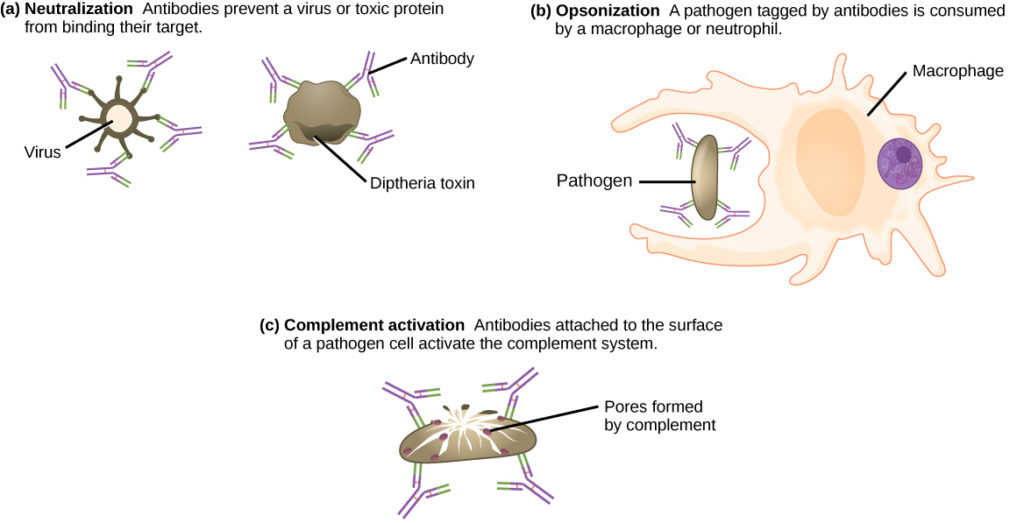 Figure 3. Antibodies may inhibit infection by (a) preventing the antigen from binding its target, (b) tagging a pathogen for destruction by macrophages or neutrophils, or (c) activating the complement cascade.

Antibodies also mark pathogens for destruction by phagocytic cells, such as macrophages or neutrophils, because phagocytic cells are highly attracted to macromolecules complexed with antibodies. Phagocytic enhancement by antibodies is called opsonization. In a process called complement fixation, IgM and IgG in serum bind to antigens and provide docking sites onto which sequential complement proteins can bind. The combination of antibodies and complement enhances opsonization even further and promotes rapid clearing of pathogens.

Not all antibodies bind with the same strength, specificity, and stability. In fact, antibodies exhibit different affinities (attraction) depending on the molecular complementarity between antigen and antibody molecules, as illustrated in Figure 4. An antibody with a higher affinity for a particular antigen would bind more strongly and stably, and thus would be expected to present a more challenging defense against the pathogen corresponding to the specific antigen.

The term avidity describes binding by antibody classes that are secreted as joined, multivalent structures (such as IgM and IgA). Although avidity measures the strength of binding, just as affinity does, the avidity is not simply the sum of the affinities of the antibodies in a multimeric structure. The avidity depends on the number of identical binding sites on the antigen being detected, as well as other physical and chemical factors. Typically, multimeric antibodies, such as pentameric IgM, are classified as having lower affinity than monomeric antibodies, but high avidity. Essentially, the fact that multimeric antibodies can bind many antigens simultaneously balances their slightly lower binding strength for each antibody/antigen interaction.

Antibodies secreted after binding to one epitope on an antigen may exhibit cross reactivity for the same or similar epitopes on different antigens. Because an epitope corresponds to such a small region (the surface area of about four to six amino acids), it is possible for different macromolecules to exhibit the same molecular identities and orientations over short regions. Cross reactivity describes when an antibody binds not to the antigen that elicited its synthesis and secretion, but to a different antigen.

Cross reactivity can be beneficial if an individual develops immunity to several related pathogens despite having only been exposed to or vaccinated against one of them. For instance, antibody cross reactivity may occur against the similar surface structures of various Gram-negative bacteria. Conversely, antibodies raised against pathogenic molecular components that resemble self molecules may incorrectly mark host cells for destruction and cause autoimmune damage. Patients who develop systemic lupus erythematosus (SLE) commonly exhibit antibodies that react with their own DNA. These antibodies may have been initially raised against the nucleic acid of microorganisms but later cross-reacted with self-antigens. This phenomenon is also called molecular mimicry.

Antibodies of the Mucosal Immune System

Antibodies synthesized by the mucosal immune system include IgA and IgM. Activated B cells differentiate into mucosal plasma cells that synthesize and secrete dimeric IgA, and to a lesser extent, pentameric IgM. Secreted IgA is abundant in tears, saliva, breast milk, and in secretions of the gastrointestinal and respiratory tracts. Antibody secretion results in a local humoral response at epithelial surfaces and prevents infection of the mucosa by binding and neutralizing pathogens.

Antibodies (immunoglobulins) are the molecules secreted from plasma cells that mediate the humoral immune response. There are five antibody classes; an antibody’s class determines its mechanism of action and production site but does not control its binding specificity. Antibodies bind antigens via variable domains and can either neutralize pathogens or mark them for phagocytosis or activate the complement cascade.