A plant’s sensory response to external stimuli relies on chemical messengers (hormones). Plant hormones affect all aspects of plant life, from flowering to fruit setting and maturation, and from phototropism to leaf fall. Potentially every cell in a plant can produce plant hormones. They can act in their cell of origin or be transported to other portions of the plant body, with many plant responses involving the synergistic or antagonistic interaction of two or more hormones. In contrast, animal hormones are produced in specific glands and transported to a distant site for action, and they act alone.

The term auxin is derived from the Greek word auxein, which means “to grow.” Auxins are the main hormones responsible for cell elongation in phototropism and gravitropism. They also control the differentiation of meristem into vascular tissue, and promote leaf development and arrangement. While many synthetic auxins are used as herbicides, IAA is the only naturally occurring auxin that shows physiological activity. Apical dominance—the inhibition of lateral bud formation—is triggered by auxins produced in the apical meristem. Flowering, fruit setting and ripening, and inhibition of abscission (leaf falling) are other plant responses under the direct or indirect control of auxins. Auxins also act as a relay for the effects of the blue light and red/far-red responses.

Commercial use of auxins is widespread in plant nurseries and for crop production. IAA is used as a rooting hormone to promote growth of adventitious roots on cuttings and detached leaves. Applying synthetic auxins to tomato plants in greenhouses promotes normal fruit development. Outdoor application of auxin promotes synchronization of fruit setting and dropping to coordinate the harvesting season. Fruits such as seedless cucumbers can be induced to set fruit by treating unfertilized plant flowers with auxins.

The effect of cytokinins was first reported when it was found that adding the liquid endosperm of coconuts to developing plant embryos in culture stimulated their growth. The stimulating growth factor was found to be cytokinin, a hormone that promotes cytokinesis (cell division). Almost 200 naturally occurring or synthetic cytokinins are known to date. Cytokinins are most abundant in growing tissues, such as roots, embryos, and fruits, where cell division is occurring. Cytokinins are known to delay senescence in leaf tissues, promote mitosis, and stimulate differentiation of the meristem in shoots and roots. Many effects on plant development are under the influence of cytokinins, either in conjunction with auxin or another hormone. For example, apical dominance seems to result from a balance between auxins that inhibit lateral buds, and cytokinins that promote bushier growth. 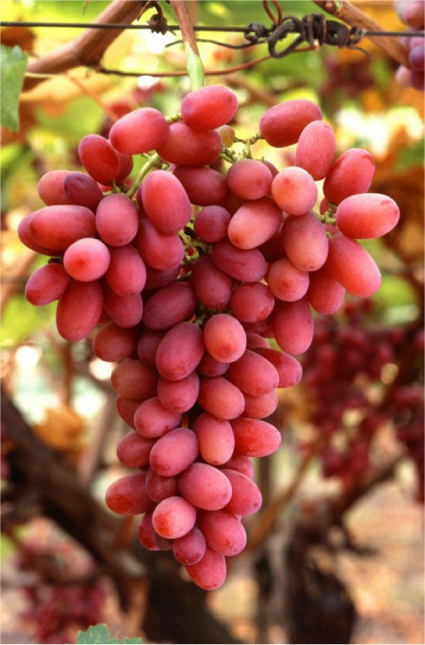 Gibberellins (GAs) are a group of about 125 closely related plant hormones that stimulate shoot elongation, seed germination, and fruit and flower maturation. GAs are synthesized in the root and stem apical meristems, young leaves, and seed embryos. In urban areas, GA antagonists are sometimes applied to trees under power lines to control growth and reduce the frequency of pruning.

GAs break dormancy (a state of inhibited growth and development) in the seeds of plants that require exposure to cold or light to germinate. Abscisic acid is a strong antagonist of GA action. Other effects of GAs include gender expression, seedless fruit development, and the delay of senescence in leaves and fruit. Seedless grapes are obtained through standard breeding methods and contain inconspicuous seeds that fail to develop. Because GAs are produced by the seeds, and because fruit development and stem elongation are under GA control, these varieties of grapes would normally produce small fruit in compact clusters. Maturing grapes are routinely treated with GA to promote larger fruit size, as well as looser bunches (longer stems), which reduces the instance of mildew infection (Figure 1).

The plant hormone abscisic acid (ABA) was first discovered as the agent that causes the abscission or dropping of cotton bolls. However, more recent studies indicate that ABA plays only a minor role in the abscission process. ABA accumulates as a response to stressful environmental conditions, such as dehydration, cold temperatures, or shortened day lengths. Its activity counters many of the growth-promoting effects of GAs and auxins. ABA inhibits stem elongation and induces dormancy in lateral buds.

ABA induces dormancy in seeds by blocking germination and promoting the synthesis of storage proteins. Plants adapted to temperate climates require a long period of cold temperature before seeds germinate. This mechanism protects young plants from sprouting too early during unseasonably warm weather in winter. As the hormone gradually breaks down over winter, the seed is released from dormancy and germinates when conditions are favorable in spring. Another effect of ABA is to promote the development of winter buds; it mediates the conversion of the apical meristem into a dormant bud. Low soil moisture causes an increase in ABA, which causes stomata to close, reducing water loss in winter buds.

Ethylene is associated with fruit ripening, flower wilting, and leaf fall. Ethylene is unusual because it is a volatile gas (C2H4). Hundreds of years ago, when gas street lamps were installed in city streets, trees that grew close to lamp posts developed twisted, thickened trunks and shed their leaves earlier than expected. These effects were caused by ethylene volatilizing from the lamps.

Aging tissues (especially senescing leaves) and nodes of stems produce ethylene. The best-known effect of the hormone, however, is the promotion of fruit ripening. Ethylene stimulates the conversion of starch and acids to sugars. Some people store unripe fruit, such as avocadoes, in a sealed paper bag to accelerate ripening; the gas released by the first fruit to mature will speed up the maturation of the remaining fruit. Ethylene also triggers leaf and fruit abscission, flower fading and dropping, and promotes germination in some cereals and sprouting of bulbs and potatoes.

Ethylene is widely used in agriculture. Commercial fruit growers control the timing of fruit ripening with application of the gas. Horticulturalists inhibit leaf dropping in ornamental plants by removing ethylene from greenhouses using fans and ventilation.

Recent research has discovered a number of compounds that also influence plant development. Their roles are less understood than the effects of the major hormones described so far.

Jasmonates play a major role in defense responses to herbivory. Their levels increase when a plant is wounded by a predator, resulting in an increase in toxic secondary metabolites. They contribute to the production of volatile compounds that attract natural enemies of predators. For example, chewing of tomato plants by caterpillars leads to an increase in jasmonic acid levels, which in turn triggers the release of volatile compounds that attract predators of the pest.

Oligosaccharins also play a role in plant defense against bacterial and fungal infections. They act locally at the site of injury, and can also be transported to other tissues. Strigolactones promote seed germination in some species and inhibit lateral apical development in the absence of auxins. Strigolactones also play a role in the establishment of mycorrhizae, a mutualistic association of plant roots and fungi. Brassinosteroids are important to many developmental and physiological processes. Signals between these compounds and other hormones, notably auxin and GAs, amplifies their physiological effect. Apical dominance, seed germination, gravitropism, and resistance to freezing are all positively influenced by hormones. Root growth and fruit dropping are inhibited by steroids.