The renin-angiotensin-aldosterone system, illustrated in Figure 1 proceeds through several steps to produce angiotensin II, which acts to stabilize blood pressure and volume. Renin (secreted by a part of the juxtaglomerular complex) is produced by the granular cells of the afferent and efferent arterioles. Thus, the kidneys control blood pressure and volume directly. Renin acts on angiotensinogen, which is made in the liver and converts it to angiotensin I. Angiotensin converting enzyme (ACE) converts angiotensin I to angiotensin II. Angiotensin II raises blood pressure by constricting blood vessels. It also triggers the release of the mineralocorticoid aldosterone from the adrenal cortex, which in turn stimulates the renal tubules to reabsorb more sodium. Angiotensin II also triggers the release of anti-diuretic hormone (ADH) from the hypothalamus, leading to water retention in the kidneys. It acts directly on the nephrons and decreases glomerular filtration rate. Medically, blood pressure can be controlled by drugs that inhibit ACE (called ACE inhibitors). 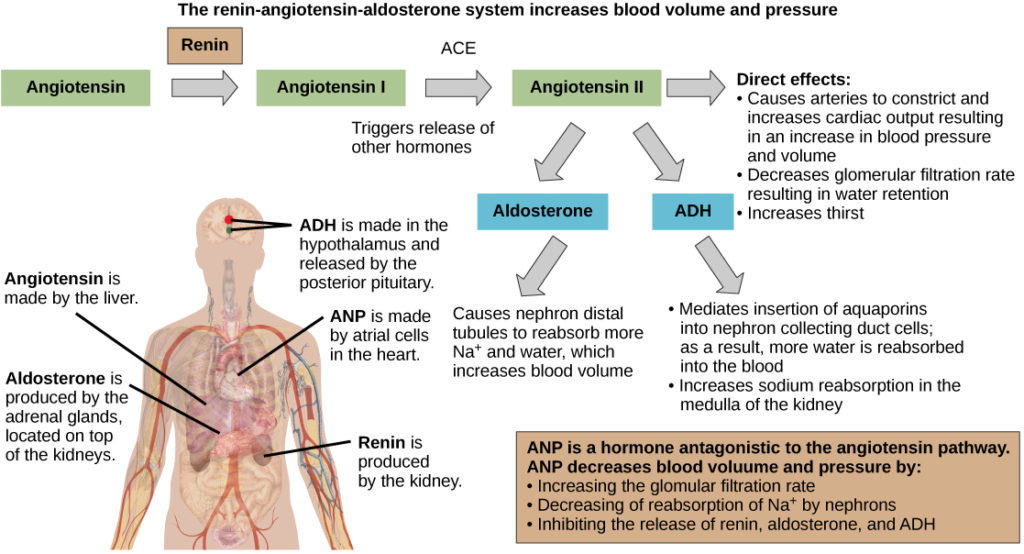