The heart is a complex muscle that pumps blood through the three divisions of the circulatory system: the coronary (vessels that serve the heart), pulmonary (heart and lungs), and systemic (systems of the body), as shown in Figure 1. Coronary circulation intrinsic to the heart takes blood directly from the main artery (aorta) coming from the heart. For pulmonary and systemic circulation, the heart has to pump blood to the lungs or the rest of the body, respectively. In vertebrates, the lungs are relatively close to the heart in the thoracic cavity. The shorter distance to pump means that the muscle wall on the right side of the heart is not as thick as the left side which must have enough pressure to pump blood all the way to your big toe. 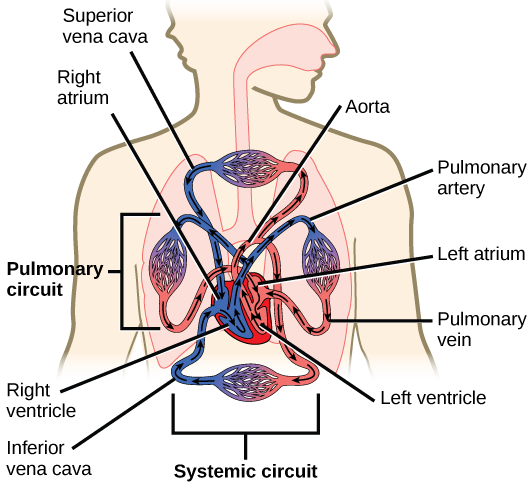 Which of the following statements about the circulatory system is false? 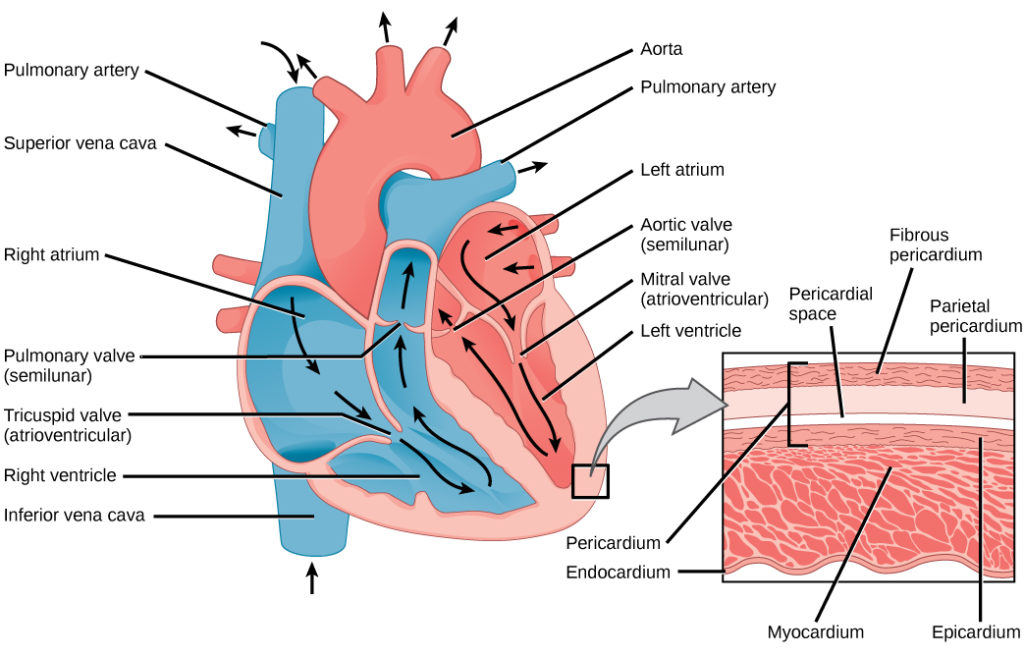 Figure 2. The heart is primarily made of a thick muscle layer, called the myocardium, surrounded by membranes. One-way valves separate the four chambers.

In addition, the right atrium receives blood from the coronary sinus which drains deoxygenated blood from the heart itself. This deoxygenated blood then passes to the right ventricle through the atrioventricular valve or the tricuspid valve, a flap of connective tissue that opens in only one direction to prevent the backflow of blood. The valve separating the chambers on the left side of the heart valve is called the biscuspid or mitral valve. After it is filled, the right ventricle pumps the blood through the pulmonary arteries, by-passing the semilunar valve (or pulmonic valve) to the lungs for re-oxygenation.

The heart is composed of three layers; the epicardium, the myocardium, and the endocardium, illustrated in Figure 2. The inner wall of the heart has a lining called the endocardium. The myocardium consists of the heart muscle cells that make up the middle layer and the bulk of the heart wall. The outer layer of cells is called the epicardium, of which the second layer is a membranous layered structure called the pericardium that surrounds and protects the heart; it allows enough room for vigorous pumping but also keeps the heart in place to reduce friction between the heart and other structures. 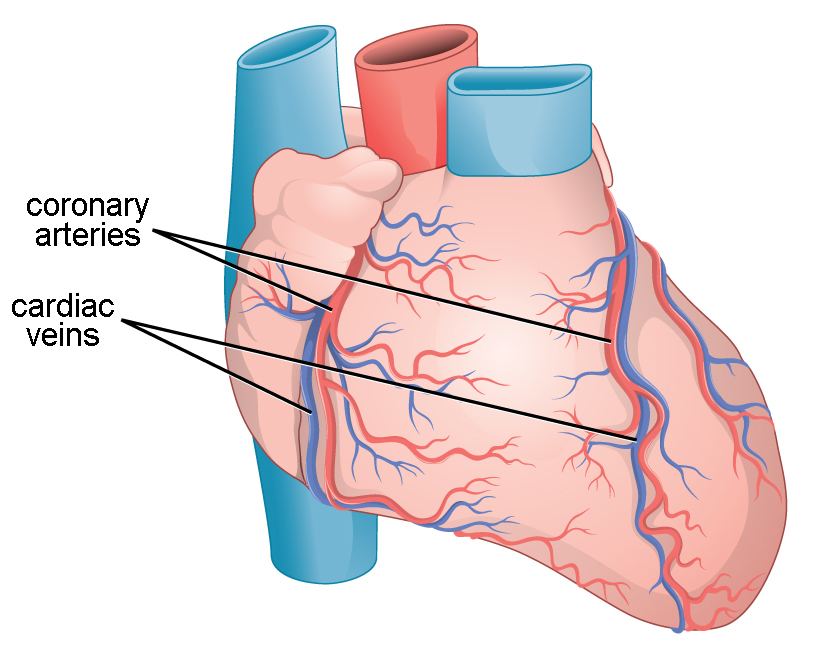 Figure 3. Blood vessels of the coronary system, including the coronary arteries and veins, keep the heart musculature oxygenated.

The heart has its own blood vessels that supply the heart muscle with blood (Figure 3). The coronary arteries branch from the aorta and surround the outer surface of the heart like a crown. They diverge into capillaries where the heart muscle is supplied with oxygen before converging again into the coronary veins to take the deoxygenated blood back to the right atrium where the blood will be re-oxygenated through the pulmonary circuit. The heart muscle will die without a steady supply of blood. Atherosclerosis is the blockage of an artery by the buildup of fatty plaques. Because of the size (narrow) of the coronary arteries and their function in serving the heart itself, atherosclerosis can be deadly in these arteries. The slowdown of blood flow and subsequent oxygen deprivation that results from atherosclerosis causes severe pain, known as angina, and complete blockage of the arteries will cause myocardial infarction: the death of cardiac muscle tissue, commonly known as a heart attack.

The main purpose of the heart is to pump blood through the body; it does so in a repeating sequence called the cardiac cycle. The cardiac cycle is the coordination of the filling and emptying of the heart of blood by electrical signals that cause the heart muscles to contract and relax. The human heart beats over 100,000 times per day. In each cardiac cycle, the heart contracts (systole), pushing out the blood and pumping it through the body; this is followed by a relaxation phase (diastole), where the heart fills with blood, as illustrated in Figure 4. The atria contract at the same time, forcing blood through the atrioventricular valves into the ventricles. Closing of the atrioventricular valves produces a monosyllabic “lup” sound. Following a brief delay, the ventricles contract at the same time forcing blood through the semilunar valves into the aorta and the artery transporting blood to the lungs (via the pulmonary artery). Closing of the semilunar valves produces a monosyllabic “dup” sound. 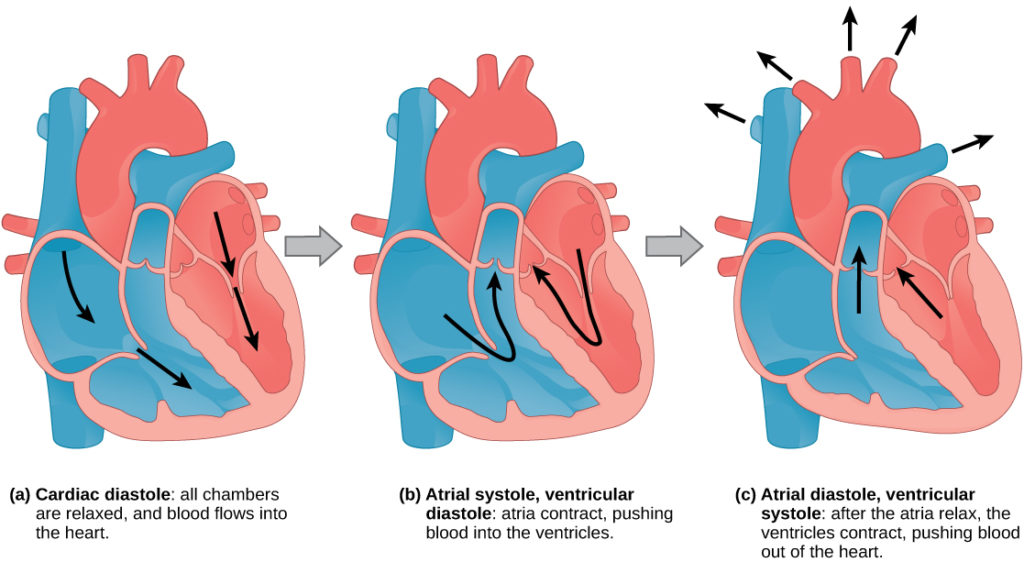 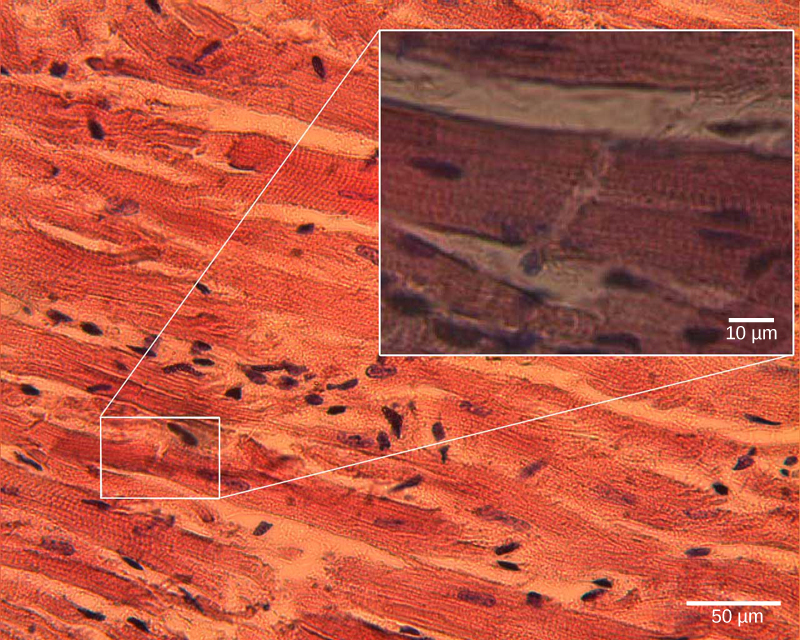 The pumping of the heart is a function of the cardiac muscle cells, or cardiomyocytes, that make up the heart muscle. Cardiomyocytes, shown in Figure 5, are distinctive muscle cells that are striated like skeletal muscle but pump rhythmically and involuntarily like smooth muscle; they are connected by intercalated disks exclusive to cardiac muscle. They are self-stimulated for a period of time and isolated cardiomyocytes will beat if given the correct balance of nutrients and electrolytes.

The autonomous beating of cardiac muscle cells is regulated by the heart’s internal pacemaker that uses electrical signals to time the beating of the heart. The electrical signals and mechanical actions, illustrated in Figure 6, are intimately intertwined. The internal pacemaker starts at the sinoatrial (SA) node, which is located near the wall of the right atrium. Electrical charges spontaneously pulse from the SA node causing the two atria to contract in unison. The pulse reaches a second node, called the atrioventricular (AV) node, between the right atrium and right ventricle where it pauses for approximately 0.1 second before spreading to the walls of the ventricles. From the AV node, the electrical impulse enters the bundle of His, then to the left and right bundle branches extending through the interventricular septum. Finally, the Purkinje fibers conduct the impulse from the apex of the heart up the ventricular myocardium, and then the ventricles contract. This pause allows the atria to empty completely into the ventricles before the ventricles pump out the blood. The electrical impulses in the heart produce electrical currents that flow through the body and can be measured on the skin using electrodes. This information can be observed as an electrocardiogram (ECG)—a recording of the electrical impulses of the cardiac muscle. 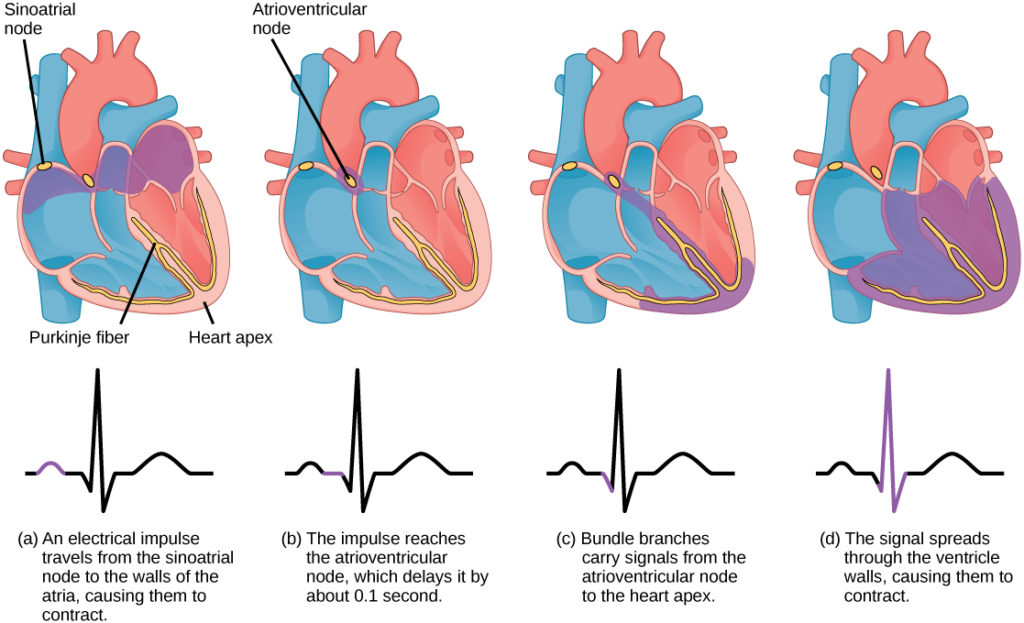 Figure 6. The beating of the heart is regulated by an electrical impulse that causes the characteristic reading of an ECG. The signal is initiated at the sinoatrial valve. The signal then (a) spreads to the atria, causing them to contract. The signal is (b) delayed at the atrioventricular node before it is passed on to the (c) heart apex. The delay allows the atria to relax before the (d) ventricles contract. The final part of the ECG cycle prepares the heart for the next beat.

The heart muscle pumps blood through three divisions of the circulatory system: coronary, pulmonary, and systemic. There is one atrium and one ventricle on the right side and one atrium and one ventricle on the left side. The pumping of the heart is a function of cardiomyocytes, distinctive muscle cells that are striated like skeletal muscle but pump rhythmically and involuntarily like smooth muscle. The internal pacemaker starts at the sinoatrial node, which is located near the wall of the right atrium. Electrical charges pulse from the SA node causing the two atria to contract in unison; then the pulse reaches the atrioventricular node between the right atrium and right ventricle. A pause in the electric signal allows the atria to empty completely into the ventricles before the ventricles pump out the blood.