Nervous systems throughout the animal kingdom vary in structure and complexity, as illustrated by the variety of animals shown in Figure 1. Some organisms, like sea sponges, lack a true nervous system. Others, like jellyfish, lack a true brain and instead have a system of separate but connected nerve cells (neurons) called a “nerve net.” Echinoderms such as sea stars have nerve cells that are bundled into fibers called nerves. Flatworms of the phylum Platyhelminthes have both a central nervous system (CNS), made up of a small “brain” and two nerve cords, and a peripheral nervous system (PNS) containing a system of nerves that extend throughout the body. The insect nervous system is more complex but also fairly decentralized. It contains a brain, ventral nerve cord, and ganglia (clusters of connected neurons). These ganglia can control movements and behaviors without input from the brain. Octopi may have the most complicated of invertebrate nervous systems—they have neurons that are organized in specialized lobes and eyes that are structurally similar to vertebrate species. 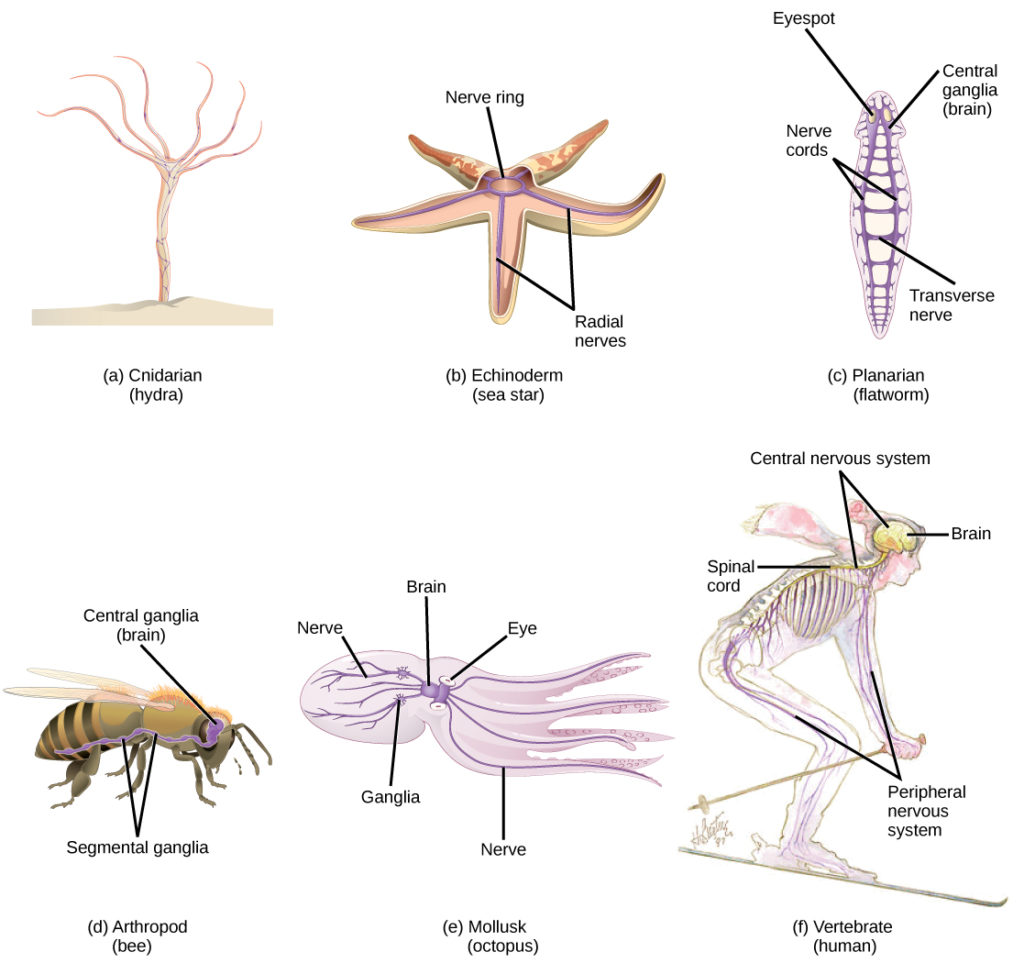 Figure 1. Nervous systems vary in structure and complexity. In (a) cnidarians, nerve cells form a decentralized nerve net. In (b) echinoderms, nerve cells are bundled into fibers called nerves. In animals exhibiting bilateral symmetry such as (c) planarians, neurons cluster into an anterior brain that processes information. In addition to a brain, (d) arthropods have clusters of nerve cell bodies, called peripheral ganglia, located along the ventral nerve cord. Mollusks such as squid and (e) octopi, which must hunt to survive, have complex brains containing millions of neurons. In (f) vertebrates, the brain and spinal cord comprise the central nervous system, while neurons extending into the rest of the body comprise the peripheral nervous system. (credit e: modification of work by Michael Vecchione, Clyde F.E. Roper, and Michael J. Sweeney, NOAA; credit f: modification of work by NIH)

The nervous system is made up of neurons, specialized cells that can receive and transmit chemical or electrical signals, and glia, cells that provide support functions for the neurons by playing an information processing role that is complementary to neurons. A neuron can be compared to an electrical wire—it transmits a signal from one place to another. Glia can be compared to the workers at the electric company who make sure wires go to the right places, maintain the wires, and take down wires that are broken. Although glia have been compared to workers, recent evidence suggests that also usurp some of the signaling functions of neurons.

There is great diversity in the types of neurons and glia that are present in different parts of the nervous system. There are four major types of neurons, and they share several important cellular components.

Like other cells, each neuron has a cell body (or soma) that contains a nucleus, smooth and rough endoplasmic reticulum, Golgi apparatus, mitochondria, and other cellular components. Neurons also contain unique structures, illustrated in Figure 2 for receiving and sending the electrical signals that make neuronal communication possible. Dendrites are tree-like structures that extend away from the cell body to receive messages from other neurons at specialized junctions called synapses. Although some neurons do not have any dendrites, some types of neurons have multiple dendrites. Dendrites can have small protrusions called dendritic spines, which further increase surface area for possible synaptic connections.

Once a signal is received by the dendrite, it then travels passively to the cell body. The cell body contains a specialized structure, the axon hillock that integrates signals from multiple synapses and serves as a junction between the cell body and an axon. An axon is a tube-like structure that propagates the integrated signal to specialized endings called axon terminals. These terminals in turn synapse on other neurons, muscle, or target organs. Chemicals released at axon terminals allow signals to be communicated to these other cells. Neurons usually have one or two axons, but some neurons, like amacrine cells in the retina, do not contain any axons. Some axons are covered with myelin, which acts as an insulator to minimize dissipation of the electrical signal as it travels down the axon, greatly increasing the speed on conduction. This insulation is important as the axon from a human motor neuron can be as long as a meter—from the base of the spine to the toes. The myelin sheath is not actually part of the neuron. Myelin is produced by glial cells. Along the axon there are periodic gaps in the myelin sheath. These gaps are called nodes of Ranvier and are sites where the signal is “recharged” as it travels along the axon. 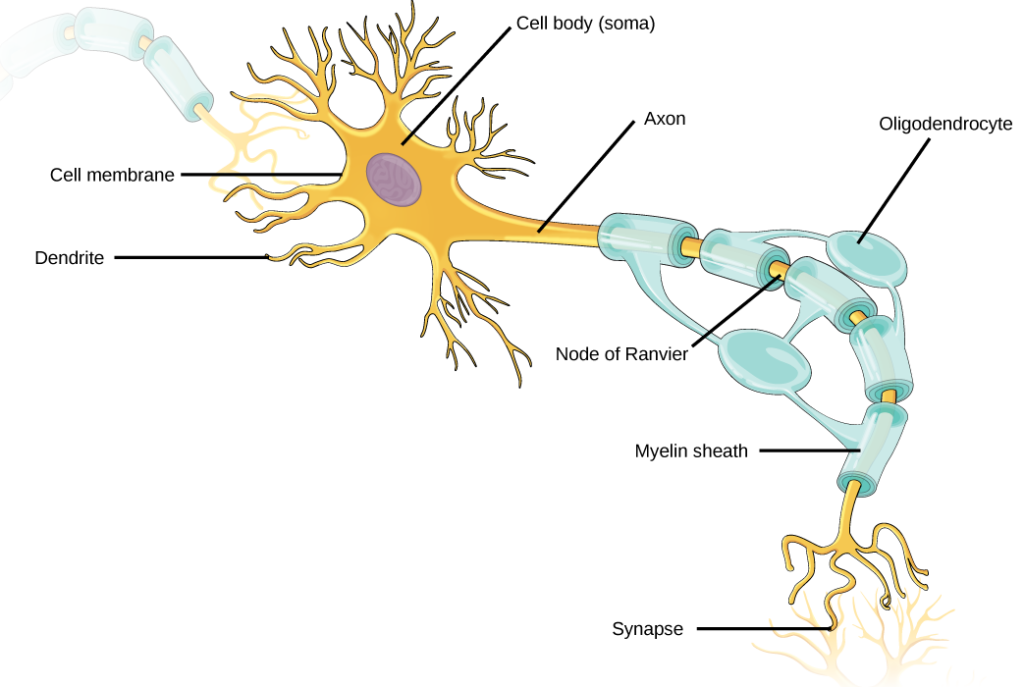 Figure 2. Neurons contain organelles common to many other cells, such as a nucleus and mitochondria. They also have more specialized structures, including dendrites and axons.

At one time, scientists believed that people were born with all the neurons they would ever have. Research performed during the last few decades indicates that neurogenesis, the birth of new neurons, continues into adulthood. Neurogenesis was first discovered in songbirds that produce new neurons while learning songs. For mammals, new neurons also play an important role in learning: about 1000 new neurons develop in the hippocampus (a brain structure involved in learning and memory) each day. While most of the new neurons will die, researchers found that an increase in the number of surviving new neurons in the hippocampus correlated with how well rats learned a new task. Interestingly, both exercise and some antidepressant medications also promote neurogenesis in the hippocampus. Stress has the opposite effect. While neurogenesis is quite limited compared to regeneration in other tissues, research in this area may lead to new treatments for disorders such as Alzheimer’s, stroke, and epilepsy.

How do scientists identify new neurons? A researcher can inject a compound called bromodeoxyuridine (BrdU) into the brain of an animal. While all cells will be exposed to BrdU, BrdU will only be incorporated into the DNA of newly generated cells that are in S phase. A technique called immunohistochemistry can be used to attach a fluorescent label to the incorporated BrdU, and a researcher can use fluorescent microscopy to visualize the presence of BrdU, and thus new neurons, in brain tissue. Figure 5 is a micrograph which shows fluorescently labeled neurons in the hippocampus of a rat. 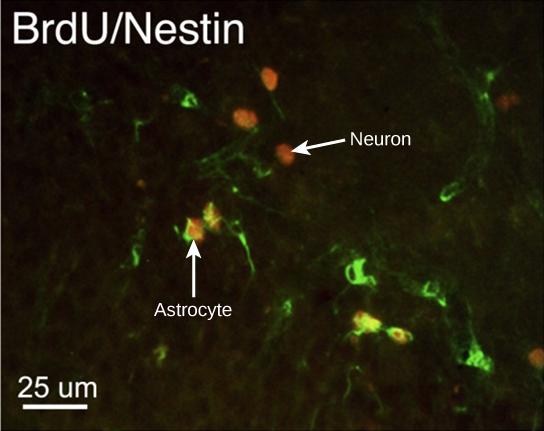 While glia are often thought of as the supporting cast of the nervous system, the number of glial cells in the brain actually outnumbers the number of neurons by a factor of ten. Neurons would be unable to function without the vital roles that are fulfilled by these glial cells. Glia guide developing neurons to their destinations, buffer ions and chemicals that would otherwise harm neurons, and provide myelin sheaths around axons. Scientists have recently discovered that they also play a role in responding to nerve activity and modulating communication between nerve cells. When glia do not function properly, the result can be disastrous—most brain tumors are caused by mutations in glia.

There are several different types of glia with different functions, two of which are shown in Figure 6.

Astrocytes, shown in Figure 7a make contact with both capillaries and neurons in the CNS. They provide nutrients and other substances to neurons, regulate the concentrations of ions and chemicals in the extracellular fluid, and provide structural support for synapses. Astrocytes also form the blood-brain barrier—a structure that blocks entrance of toxic substances into the brain. Astrocytes, in particular, have been shown through calcium imaging experiments to become active in response to nerve activity, transmit calcium waves between astrocytes, and modulate the activity of surrounding synapses. Satellite glia provide nutrients and structural support for neurons in the PNS. Microglia scavenge and degrade dead cells and protect the brain from invading microorganisms. Oligodendrocytes, shown in Figure 7b form myelin sheaths around axons in the CNS. One axon can be myelinated by several oligodendrocytes, and one oligodendrocyte can provide myelin for multiple neurons. This is distinctive from the PNS where a single Schwann cell provides myelin for only one axon as the entire Schwann cell surrounds the axon. Radial glia serve as scaffolds for developing neurons as they migrate to their end destinations. Ependymal cells line fluid-filled ventricles of the brain and the central canal of the spinal cord. They are involved in the production of cerebrospinal fluid, which serves as a cushion for the brain, moves the fluid between the spinal cord and the brain, and is a component for the choroid plexus.

In Summary: Neurons and Glial Cells

The nervous system is made up of neurons and glia. Neurons are specialized cells that are capable of sending electrical as well as chemical signals. Most neurons contain dendrites, which receive these signals, and axons that send signals to other neurons or tissues. There are four main types of neurons: unipolar, bipolar, multipolar, and pseudounipolar neurons. Glia are non-neuronal cells in the nervous system that support neuronal development and signaling. There are several types of glia that serve different functions.