Until the 1990s, the sequencing of DNA (reading the sequence of DNA) was a relatively expensive and long process. Using radiolabeled nucleotides also compounded the problem through safety concerns. With currently available technology and automated machines, the process is cheap, safer, and can be completed in a matter of hours. Fred Sanger developed the sequencing method used for the human genome sequencing project, which is widely used today (Figure 1).

Visit this site to watch a video explaining the DNA sequence reading technique that resulted from Sanger’s work.

Figure 1. In Frederick Sanger’s dideoxy chain termination method, dye-labeled dideoxynucleotides are used to generate DNA fragments that terminate at different points. The DNA is separated by capillary electrophoresis on the basis of size, and from the order of fragments formed, the DNA sequence can be read. The DNA sequence readout is shown on an electropherogram that is generated by a laser scanner. 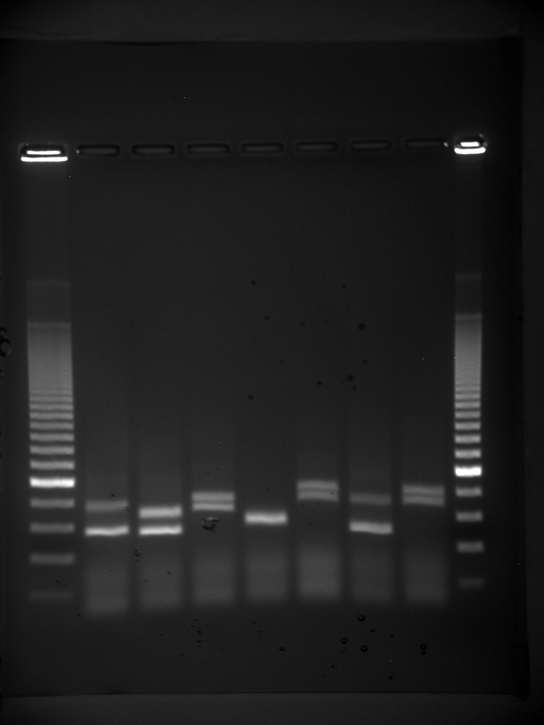 The DNA sample to be sequenced is denatured or separated into two strands by heating it to high temperatures. The DNA is divided into four tubes in which a primer, DNA polymerase, and all four nucleotides (A, T, G, and C) are added. In addition to each of the four tubes, limited quantities of one of the four dideoxynucleotides are added to each tube respectively. The tubes are labeled as A, T, G, and C according to the ddNTP added. For detection purposes, each of the four dideoxynucleotides carries a different fluorescent label. Chain elongation continues until a fluorescent dideoxy nucleotide is incorporated, after which no further elongation takes place. After the reaction is over, electrophoresis is performed. Even a difference in length of a single base can be detected. The sequence is read from a laser scanner. For his work on DNA sequencing, Sanger received a Nobel Prize in chemistry in 1980.

Sanger’s genome sequencing has led to a race to sequence human genomes at a rapid speed and low cost, often referred to as the $1000 in one day sequence. Learn more by selecting the Sequencing at Speed animation here.

Gel electrophoresis (Figure 2) is a technique used to separate DNA fragments of different sizes. Usually the gel is made of a chemical called agarose. Agarose powder is added to a buffer and heated. After cooling, the gel solution is poured into a casting tray. Once the gel has solidified, the DNA is loaded on the gel and electric current is applied. The DNA has a net negative charge and moves from the negative electrode toward the positive electrode. The electric current is applied for sufficient time to let the DNA separate according to size; the smallest fragments will be farthest from the well (where the DNA was loaded), and the heavier molecular weight fragments will be closest to the well. Once the DNA is separated, the gel is stained with a DNA-specific dye for viewing it.

Neanderthal Genome: How Are We Related?

The first draft sequence of the Neanderthal genome was published by Richard E. Green et al. in 2010.[1] Neanderthals are the closest ancestors of present-day humans. They were known to have lived in Europe and Western Asia before they disappeared from fossil records approximately 30,000 years ago. Green’s team studied almost 40,000-year-old fossil remains that were selected from sites across the world. Extremely sophisticated means of sample preparation and DNA sequencing were employed because of the fragile nature of the bones and heavy microbial contamination. In their study, the scientists were able to sequence some four billion base pairs. The Neanderthal sequence was compared with that of present-day humans from across the world. After comparing the sequences, the researchers found that the Neanderthal genome had 2 to 3 percent greater similarity to people living outside Africa than to people in Africa. While current theories have suggested that all present-day humans can be traced to a small ancestral population in Africa, the data from the Neanderthal genome may contradict this view. Green and his colleagues also discovered DNA segments among people in Europe and Asia that are more similar to Neanderthal sequences than to other contemporary human sequences. Another interesting observation was that Neanderthals are as closely related to people from Papua New Guinea as to those from China or France. This is surprising because Neanderthal fossil remains have been located only in Europe and West Asia. Most likely, genetic exchange took place between Neanderthals and modern humans as modern humans emerged out of Africa, before the divergence of Europeans, East Asians, and Papua New Guineans.

Several genes seem to have undergone changes from Neanderthals during the evolution of present-day humans. These genes are involved in cranial structure, metabolism, skin morphology, and cognitive development. One of the genes that is of particular interest is RUNX2, which is different in modern day humans and Neanderthals. This gene is responsible for the prominent frontal bone, bell-shaped rib cage, and dental differences seen in Neanderthals. It is speculated that an evolutionary change in RUNX2 was important in the origin of modern-day humans, and this affected the cranium and the upper body.