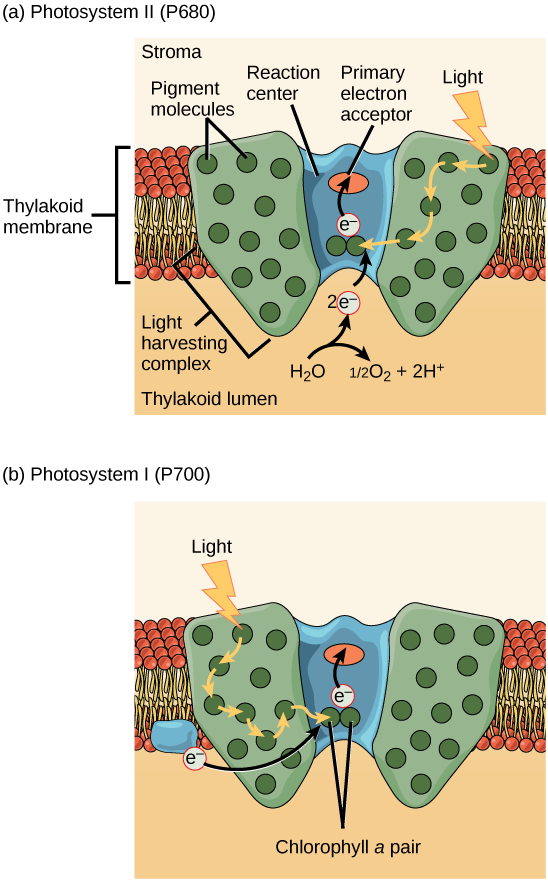 Figure 1. A photosystem consists of a light-harvesting complex and a reaction center. Pigments in the light-harvesting complex pass light energy to two special chlorophyll a molecules in the reaction center. The light excites an electron from the chlorophyll a pair, which passes to the primary electron acceptor. The excited electron must then be replaced. In (a) photosystem II, the electron comes from the splitting of water, which releases oxygen as a waste product. In (b) photosystem I, the electron comes from the chloroplast electron transport chain discussed below.

The actual step that converts light energy into chemical energy takes place in a multiprotein complex called a photosystem, two types of which are found embedded in the thylakoid membrane, photosystem II (PSII) and photosystem I (PSI) (Figure 2). The two complexes differ on the basis of what they oxidize (that is, the source of the low-energy electron supply) and what they reduce (the place to which they deliver their energized electrons).

Both photosystems have the same basic structure; a number of antenna proteins to which the chlorophyll molecules are bound surround the reaction center where the photochemistry takes place. Each photosystem is serviced by the light-harvesting complex, which passes energy from sunlight to the reaction center; it consists of multiple antenna proteins that contain a mixture of 300–400 chlorophyll a and b molecules as well as other pigments like carotenoids. The absorption of a single photon or distinct quantity or “packet” of light by any of the chlorophylls pushes that molecule into an excited state. In short, the light energy has now been captured by biological molecules but is not stored in any useful form yet. The energy is transferred from chlorophyll to chlorophyll until eventually (after about a millionth of a second), it is delivered to the reaction center. Up to this point, only energy has been transferred between molecules, not electrons. 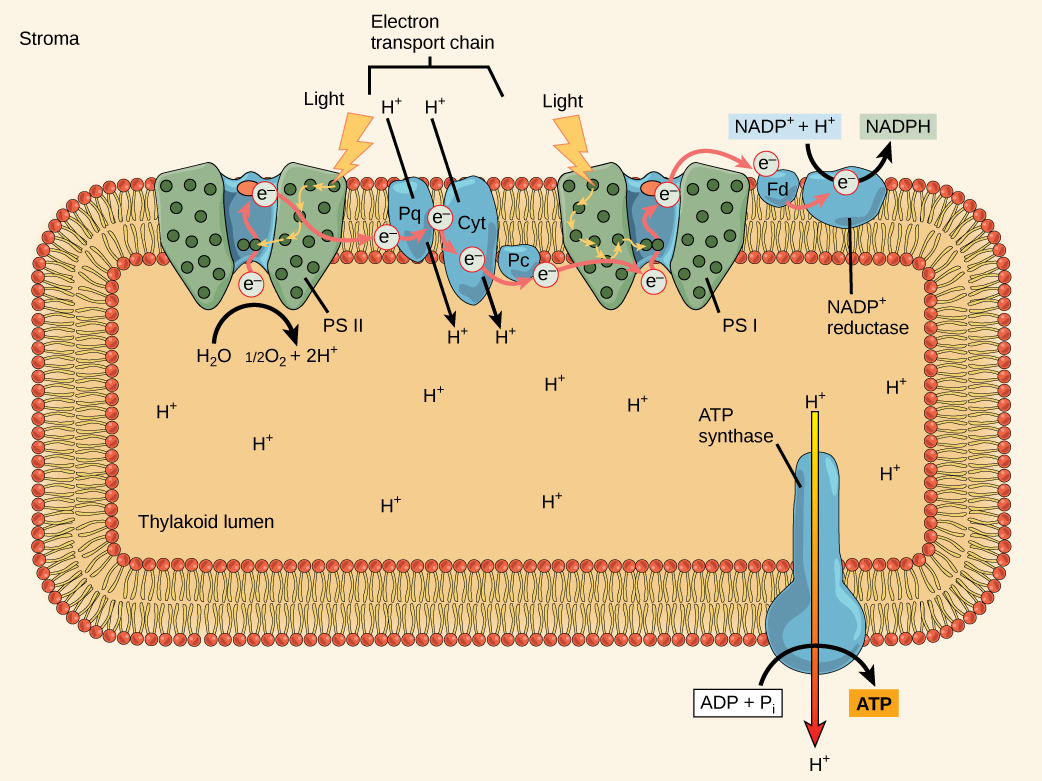 The reaction center contains a pair of chlorophyll a molecules with a special property. Those two chlorophylls can undergo oxidation upon excitation; they can actually give up an electron in a process called a photoact. It is at this step in the reaction center, that light energy is converted into an excited electron. All of the subsequent steps involve getting that electron onto the energy carrier NADPH for delivery to the Calvin cycle where the electron is deposited onto carbon for long-term storage in the form of a carbohydrate. PSII and PSI are two major components of the photosynthetic electron transport chain, which also includes the cytochrome complex. The cytochrome complex, an enzyme composed of two protein complexes, transfers the electrons from the carrier molecule plastoquinone (Pq) to the protein plastocyanin (Pc), thus enabling both the transfer of protons across the thylakoid membrane and the transfer of electrons from PSII to PSI.

The reaction center of PSII (called P680) delivers its high-energy electrons, one at the time, to the primary electron acceptor, and through the electron transport chain (Pq to cytochrome complex to plastocyanine) to PSI. P680’s missing electron is replaced by extracting a low-energy electron from water; thus, water is split and PSII is re-reduced after every photoact. Splitting one H2O molecule releases two electrons, two hydrogen atoms, and one atom of oxygen. Splitting two molecules is required to form one molecule of diatomic O2 gas. About 10 percent of the oxygen is used by mitochondria in the leaf to support oxidative phosphorylation. The remainder escapes to the atmosphere where it is used by aerobic organisms to support respiration.

As electrons move through the proteins that reside between PSII and PSI, they lose energy. That energy is used to move hydrogen atoms from the stromal side of the membrane to the thylakoid lumen. Those hydrogen atoms, plus the ones produced by splitting water, accumulate in the thylakoid lumen and will be used synthesize ATP in a later step. Because the electrons have lost energy prior to their arrival at PSI, they must be re-energized by PSI, hence, another photon is absorbed by the PSI antenna. That energy is relayed to the PSI reaction center (called P700). P700 is oxidized and sends a high-energy electron to NADP+ to form NADPH. Thus, PSII captures the energy to create proton gradients to make ATP, and PSI captures the energy to reduce NADP+ into NADPH. The two photosystems work in concert, in part, to guarantee that the production of NADPH will roughly equal the production of ATP. Other mechanisms exist to fine tune that ratio to exactly match the chloroplast’s constantly changing energy needs.

As in the intermembrane space of the mitochondria during cellular respiration, the buildup of hydrogen ions inside the thylakoid lumen creates a concentration gradient. The passive diffusion of hydrogen ions from high concentration (in the thylakoid lumen) to low concentration (in the stroma) is harnessed to create ATP, just as in the electron transport chain of cellular respiration. The ions build up energy because of diffusion and because they all have the same electrical charge, repelling each other.

To release this energy, hydrogen ions will rush through any opening, similar to water jetting through a hole in a dam. In the thylakoid, that opening is a passage through a specialized protein channel called the ATP synthase. The energy released by the hydrogen ion stream allows ATP synthase to attach a third phosphate group to ADP, which forms a molecule of ATP (Figure 2). The flow of hydrogen ions through ATP synthase is called chemiosmosis because the ions move from an area of high to an area of low concentration through a semi-permeable structure.

The pigments of the first part of photosynthesis, the light-dependent reactions, absorb energy from sunlight. A photon strikes the antenna pigments of photosystem II to initiate photosynthesis. The energy travels to the reaction center that contains chlorophyll a to the electron transport chain, which pumps hydrogen ions into the thylakoid interior. This action builds up a high concentration of ions. The ions flow through ATP synthase via chemiosmosis to form molecules of ATP, which are used for the formation of sugar molecules in the second stage of photosynthesis. Photosystem I absorbs a second photon, which results in the formation of an NADPH molecule, another energy and reducing power carrier for the light-independent reactions.