What is Climate Change?

Climate refers to the long-term, predictable atmospheric conditions of a specific area. The climate of a biome is characterized by having consistent temperature and annual rainfall ranges. Climate does not address the amount of rain that fell on one particular day in a biome or the colder-than-average temperatures that occurred on one day. In contrast, weather refers to the conditions of the atmosphere during a short period of time. Weather forecasts are usually made for 48-hour cycles. Long-range weather forecasts are available but can be unreliable.

To better understand the difference between climate and weather, imagine that you are planning an outdoor event in northern Wisconsin. You would be thinking about climate when you plan the event in the summer rather than the winter because you have long-term knowledge that any given Saturday in the months of May to August would be a better choice for an outdoor event in Wisconsin than any given Saturday in January. However, you cannot determine the specific day that the event should be held on because it is difficult to accurately predict the weather on a specific day. Climate can be considered “average” weather.

Climate change can be understood by approaching three areas of study:

Climate change, and specifically the anthropogenic (meaning, caused by humans) warming trend presently underway, is recognized as a major extinction threat, particularly when combined with other threats such as habitat loss. Scientists disagree about the likely magnitude of the effects, with extinction rate estimates ranging from 15 percent to 40 percent of species committed to extinction by 2050. Scientists do agree, however, that climate change will alter regional climates, including rainfall and snowfall patterns, making habitats less hospitable to the species living in them. The warming trend will shift colder climates toward the north and south poles, forcing species to move with their adapted climate norms while facing habitat gaps along the way. The shifting ranges will impose new competitive regimes on species as they find themselves in contact with other species not present in their historic range. One such unexpected species contact is between polar bears and grizzly bears. Previously, these two species had separate ranges. Now, their ranges are overlapping and there are documented cases of these two species mating and producing viable offspring. Changing climates also throw off species’ delicate timing adaptations to seasonal food resources and breeding times. Many contemporary mismatches to shifts in resource availability and timing have already been documented. 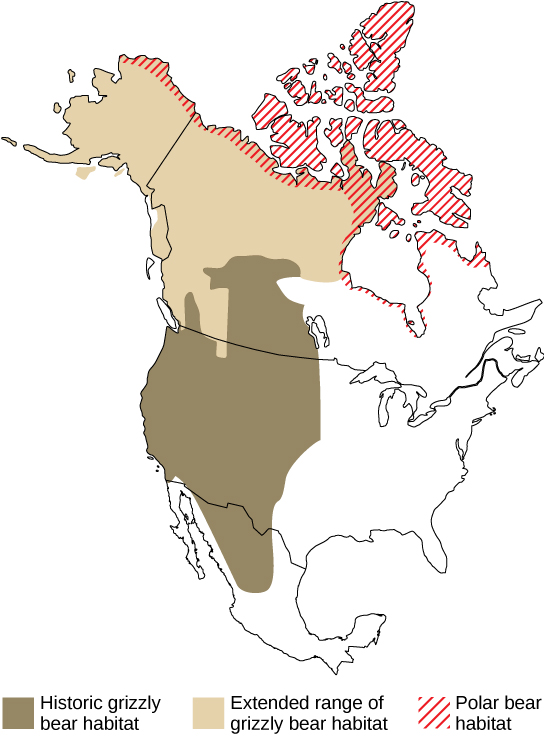 Figure 1. Since 2008, grizzly bears (Ursus arctos horribilis) have been spotted farther north than their historic range, a possible consequence of climate change. As a result, grizzly bear habitat now overlaps polar bear (Ursus maritimus) habitat. The two kinds of bears, which are capable of mating and producing viable offspring, are considered separate species as historically they lived in different habitats and never met. However, in 2006 a hunter shot a wild grizzly-polar bear hybrid known as a grolar bear, the first wild hybrid ever found.

Range shifts are already being observed: for example, some European bird species ranges have moved 91 km northward. The same study suggested that the optimal shift based on warming trends was double that distance, suggesting that the populations are not moving quickly enough. Range shifts have also been observed in plants, butterflies, other insects, freshwater fishes, reptiles, and mammals.

Climate gradients will also move up mountains, eventually crowding species higher in altitude and eliminating the habitat for those species adapted to the highest elevations. Some climates will completely disappear. The rate of warming appears to be accelerated in the arctic, which is recognized as a serious threat to polar bear populations that require sea ice to hunt seals during the winter months: seals are the only source of protein available to polar bears. A trend to decreasing sea ice coverage has occurred since observations began in the mid-twentieth century. The rate of decline observed in recent years is far greater than previously predicted by climate models.

Finally, global warming will raise ocean levels due to melt water from glaciers and the greater volume of warmer water. Shorelines will be inundated, reducing island size, which will have an effect on some species, and a number of islands will disappear entirely. Additionally, the gradual melting and subsequent refreezing of the poles, glaciers, and higher elevation mountains—a cycle that has provided freshwater to environments for centuries—will also be jeopardized. This could result in an overabundance of salt water and a shortage of fresh water.