How To: Given an inequality bounded by a parabola, sketch a graph.

Example 4: Graphing an Inequality for a Parabola

First, graph the corresponding equation [latex]y={x}^{2}+1[/latex]. Since [latex]y>{x}^{2}+1[/latex] has a greater than symbol, we draw the graph with a dashed line. Then we choose points to test both inside and outside the parabola. Let’s test the points [latex]\left(0,2\right)[/latex] and [latex]\left(2,0\right)[/latex]. One point is clearly inside the parabola and the other point is clearly outside.

The graph is shown in Figure 9. We can see that the solution set consists of all points inside the parabola, but not on the graph itself. 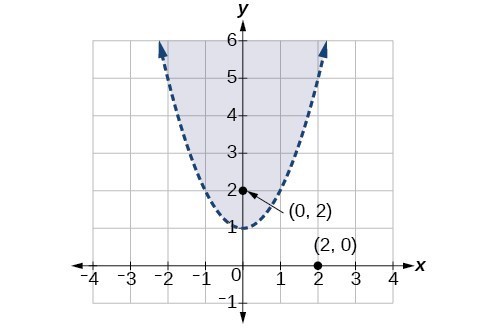 Graphing a System of Nonlinear Inequalities

How To: Given a system of nonlinear inequalities, sketch a graph.

Example 5: Graphing a System of Inequalities

These two equations are clearly parabolas. We can find the points of intersection by the elimination process: Add both equations and the variable [latex]y[/latex] will be eliminated. Then we solve for [latex]x[/latex].

Substitute the x-values into one of the equations and solve for [latex]y[/latex]. 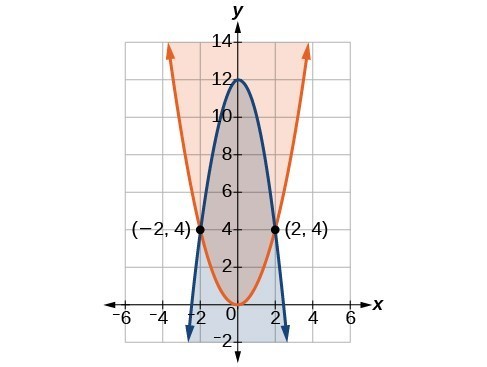