What is Narrative Writing?

When you write a book report or tell a story or explain what happened first, second, and third you are giving a narrative account. Narrative writing is commonly used when we want to share our ideas with others. We write about what we like, what’s important to us, and what we think others will enjoy reading. Narrative writing is descriptive writing, but it is not usually associated with academic writing that requires higher-order thinking skills, including the research components described in Bloom’s taxonomy (knowledge, comprehension, application, analysis, synthesis, and evaluation).

Narrative writing is often associated with fiction writing. We write about people who do things. We write about a struggle and how it is overcome. We usually write from a particular perspective or point of view: “Let me tell you about my first day in public school. It still stands out as one of the worst days of my life…..” or “Going to first grade for me was so exciting! I could hardly wait to get there, and when I look back at that wonderful day with a beautiful teacher and all those new people I’d never seen before, I still get a thrill.”

You can see from the two above examples that narratives are often written in first person. Readers are encouraged to be a part of the author’s world. They’re invited into that world by the author’s words and images and details. Narrative writing involves vivid, descriptive examples of people and events.

If you think of narrative writing as storytelling, you can begin a short narrative project. Consider the essential elements of a story: it must have a setting, it must contain characters, there must be a particular plot or story line, a problem (sometimes called ‘conflict’) must come into play to help move the story along, there must eventually be a resolution to the problem, and the story must be told from someone’s perspective (or point of view). We’ll look at each of these elements of narrative writing: 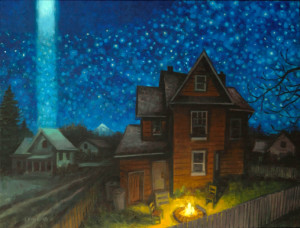 “It was a dark and stormy night.” There’s a setting for you. Charlie Brown’s dog, Snoopy, began his great American novel with that opening line. It sent chills down every child’s spine just thinking about Snoopy looking out drearily from within the shelter of his dog house!

A setting must be somewhere. The story you are telling must take place in some specific place at some specific time, whether it’s in a space ship on its way to another galaxy or the attic in your house. It can certainly be an imaginary place, but even imaginary places have to be described. Your reader must have a sense of place. If you’re writing about a log cabin in the woods, is it a vacation cabin that your family rents each summer, with all the modern conveniences (including WiFi), or is it a pioneer family’s crudely-constructed hut quickly built from scavenged logs in the Wyoming wilderness of 1820? The characters and story that you develop are clearly dependent on the setting you develop for the reader.

Your setting needs to have characters that do things connected to the place you’ve put them in. If you’re writing about dogs and cats, you don’t necessarily need people. In that case, the dogs and cats are your characters. If you do have people, they’ll be interacting with each other in some way. Dogs, cats, and people (and any characters you create) will have names and personalities and they will speak to each other and deal with all the situations in your story.

You may be very creative with your characters, assigning very particular characteristics to each. You need main characters and supporting characters. Your narrative will be about a person or two or three people who interact within the plot of your narrative. Characters can be heroic “protagonists” and their arch enemies, the “antagonists,” who are out to get them. Characters are needed to move the story through the events needed to get from the beginning to the end.

You may include “stock characters,” like Charlie Brown’s teacher whose only lines throughout the history of the cartoon are “wah, wah, wah.” In other words, stock characters are in a story as place holders – they’re there to fill out the background and we don’t expect them to do anything unexpected. Another example would be those people in TV shows or movies that always do the same thing. They’re minor characters, and we’re never surprised by them. The irate boss is always irate. Remember Bulldog of the Frazier TV show? Every time he lost something he got angry and used the same lines, dissing people who must have stolen whatever he lost; then he found it and said, “oh, there it is.” We come to expect Bulldog to do that and would be shocked if he changed his habit.

A story’s plot is the raison d’etre of the characters’ coming together in the setting and doing what they do. If you’re telling about a vacation you took, you have some element in mind to hang the characters and events together. Was that the summer you got the worst sunburn of your life? How did you get the sunburn? What led up to it? Who were you with and how did the sunburn affect your summer? Your reader will assume that your sunburn finally went away.

“Last summer I got the worst sunburn of my life! I thought I would die, it hurt so much. No one could touch me, and I couldn’t lean back on anything because my back would stick to chairs. I couldn’t wear anything but really loose shirts, and I had a fever and my skin itched. It wasn’t just my back, either. My face was red and my eyes hurt. I had to stay inside and couldn’t hang with my friends. It was the worst summer of my life and I will never go with Jake and Mary to that stupid beach again. They didn’t tell me what would happen, and when it did happen and I got sunburned they just laughed at me…..”

Poor girl. Here’s a real problem, she’s upset, and she’s trying to write a narrative account of this horrible time in her life. She’s introduced two characters who probably started out as friends but aren’t her friends any more. She got involved in a situation that she was unprepared for. The consequences were disastrous, according to her. She will always remember the beach where the event took place, and until the day she dies she will likely never return to it. Who knows what she’ll do about Jake and Mary, but they should probably watch out. 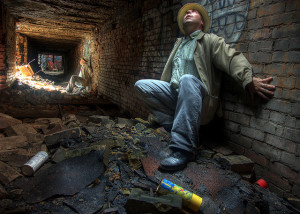 Every story needs some kind of problem to move it along. Problems are much more interesting to read about than situations where nothing needs fixing. If Cinderella’s father had married a wonderful woman with loving daughters Cinderella probably never would have been in a situation to marry Prince Charming. In fact, her name probably would have been Cynthia instead of Cinderella, and maybe she wouldn’t be quite the sweet girl we expect her to be in the fairy story.

Problems can’t go on forever, though. Neither can stories. All good stories really do need to come to an end. The reader has to be able to close the book and say, “well, that’s the end,” and feel pretty good about how the story progressed. We like to solve problems. We don’t like to live in a world where things are continually wrong and nothing gets fixed. Good stories need to resolve their problems.

Even stories that have sad endings have resolutions. Somebody dies and the world is a sadder place, but people do move on. That sounds harsh, but that’s what happens. The world doesn’t stop because somebody dies. The world is changed, and people are changed, but another story comes into play and characters move into new settings and new plots are hatched and new problems occur.

Try writing your story idea in one sentence. “I’ll tell you about a medieval knight who traveled through the Alps on a quest to find the Holy Grail, had adventures with lions and tigers and bears and even a dragon, rescued the girl of his dreams from an evil sorcerer, and returned home to live happily ever after.” Within this long sentence you have characters, plot, and problems. The problems develop and are eventually resolved. Your knight could die in the wilderness and the love of his life could go off with someone else. But that would be hard on the knight, and if he’s your main character your story will get pretty confusing to the reader, who has built up certain expectations for the knight and the love of his life.

This is where perspective comes in. What do you want to say and who is interested in hearing about your characters, their problems, and their resolutions? You want to connect to particular readers, and in order to do that you should be able to write from a particular perspective. Your perspective helps your reader have a clear perspective. Are you writing a story about outer space aliens? You may assume the perspective of an alien, and share with the reader the particular attributes and characteristics of the residents of his planet. Perhaps you want the reader to conform to that perspective; if so, those attributes should connect positively to your reader. Maybe the alien is away from his family and misses them. The alien is probably not going to be an evil monster intent on killing every living creature on earth. If he is, then sharing that perspective with your reader will require making that creature downright blatantly nasty in the eye of the reader.

While perspective is listed last on this list of narrative elements, you should consider it as the first thing to consider when writing a narrative. How you see a situation will be different than how someone else sees it. If you want to connect with your reader, have the reader’s interests in mind and determine how you can mesh the reader’s interests with the manner in which you relate the story.

Tips for Writing a Narrative