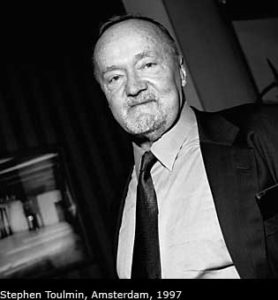 Stephen Toulmin, an English philosopher and logician, identified elements of a persuasive argument. These give useful categories by which an argument may be analyzed.

You should use a hearing aid.

Many people start with a claim, but then find that it is challenged. If you just ask me to do something, I will not simply agree with what you want. I will ask why I should agree with you. I will ask you to prove your claim. This is where grounds become important.

The grounds (or data) is the basis of real persuasion and is made up of data and hard facts, plus the reasoning behind the claim. It is the ‘truth’ on which the claim is based. Grounds may also include proof of expertise and the basic premises on which the rest of the argument is built. 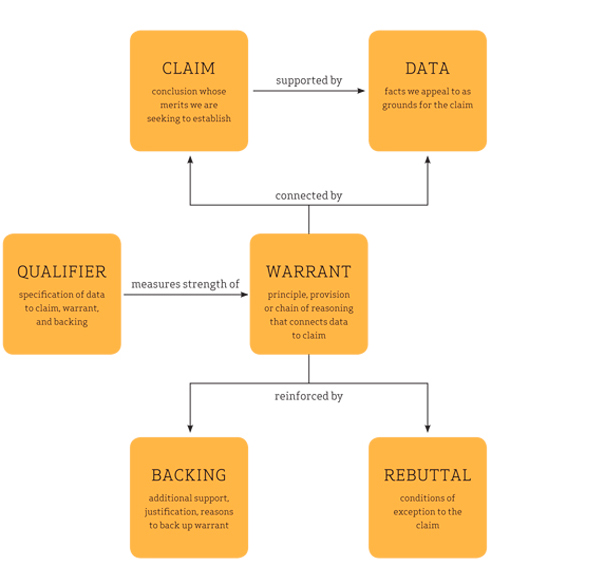 The actual truth of the data may be less that 100%, as much data are ultimately based on perception. We assume what we measure is true, but there may be problems in this measurement, ranging from a faulty measurement instrument to biased sampling.

It is critical to the argument that the grounds are not challenged because, if they are, they may become a claim, which you will need to prove with even deeper information and further argument.

Over 70% of all people over 65 years have a hearing difficulty.

Information is usually a very powerful element of persuasion, although it does affect people differently. Those who are dogmatic, logical, or rational will more likely to be persuaded by factual data. Those who argue emotionally and who are highly invested in their own position will challenge it or otherwise try to ignore it. It is often a useful test to give something factual to the other person that disproves their argument, and watch how they handle it. Some will accept it without question. Some will dismiss it out of hand. Others will dig deeper, requiring more explanation. This is where the warrant comes into its own.

A warrant links data and other grounds to a claim, legitimizing the claim by showing the grounds to be relevant. The warrant may be explicit or unspoken and implicit. It answers the question ‘Why does that data mean your claim is true?’

A hearing aid helps most people to hear better.

The warrant may be simple and it may also be a longer argument, with additional sub–elements including those described below.

Warrants may be based on logos, ethos or pathos, or values that are assumed to be shared with the listener.

In many arguments, warrants are often implicit and hence unstated. This gives space for the other person to question and expose the warrant, perhaps to show it is weak or unfounded.

The backing (or support) for an argument gives additional support to the warrant by answering different questions.

The qualifier (or modal qualifier) indicates the strength of the leap from the data to the warrant and may limit how universally the claim applies. They include words such as ‘most’, ‘usually’, ‘always’ or ‘sometimes’. Arguments may hence range from strong assertions to generally quite floppy with vague and often rather uncertain kinds of statement.

Another variant is the reservation, which may give the possibility of the claim being incorrect.

Unless there is evidence to the contrary, hearing aids do no harm to ears.

Qualifiers and reservations are much used by advertisers who are constrained not to lie. Thus they slip ‘usually’, ‘virtually’, ‘unless’ and so on into their claims.

There is a support desk that deals with technical problems.

Any rebuttal is an argument in itself, and thus may include a claim, warrant, backing and so on. It also, of course can have a rebuttal. Thus if you are presenting an argument, you can seek to understand both possible rebuttals and also rebuttals to the rebuttals.

Arrangement, Use of Language