Describe the ways in which electromagnetic energy can behave when it interacts with an object.

Prior Knowledge and Skills

Light waves across the electromagnetic spectrum behave in similar ways. When a light wave encounters an object, they are either transmitted, reflected, absorbed, refracted, polarized, diffracted, or scattered depending on the composition of the object and the wavelength of the light.

Light that is transmitted by a sample goes through the sample without being absorbed. 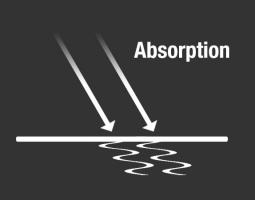 Figure 3.3.1. A diagram showing arrows for incoming energy hitting a surface and waves beneath the surface to illustrate the energy being absorbed by the surface.

Absorption occurs when photons from incident light hit atoms and molecules and cause them to vibrate. The more an object’s molecules move and vibrate, the hotter it becomes. This heat is then emitted from the object as thermal energy.

Some objects, such as darker colored objects, absorb more incident light energy than others. For example, black pavement absorbs most visible and UV energy and reflects very little, while a light-colored concrete sidewalk reflects more energy than it absorbs. Thus, the black pavement is hotter than the sidewalk on a hot summer day. Photons bounce around during this absorption process and lose bits of energy to numerous molecules along the way. This thermal energy then radiates in the form of longer wavelength infrared energy.

Thermal radiation from the energy-absorbing asphalt and roofs in a city can raise its surface temperature by as much as 10° Celsius. The Landsat 7 satellite image below shows the city of Atlanta as an island of heat compared to the surrounding area. Sometimes this warming of air above cities can influence weather, which is called the “urban heat island” effect. 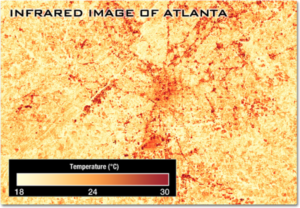 Figure 3.3.2. This image shows spots of orange and red – indicating elevated temperatures of plus 24 to 30 degrees Celsius – tracing the urban areas in and around the city of Atlanta. Credit: Marit Jentoft-Nilsen, based on Landsat-7 data.

Reflection is when incident light (incoming light) hits an object and bounces off. Very smooth surfaces such as mirrors reflect almost all incident light.

The color of an object is actually the wavelengths of the light reflected while all other wavelengths are absorbed. Color, in this case, refers to the different wavelengths of light in the visible light spectrum perceived by our eyes. The physical and chemical composition of matter determines which wavelength (or color) is reflected. 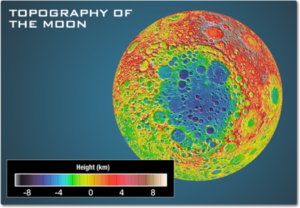 Figure 3.3.3. An image showing the peaks and craters of the moon on a scale from white and brown for high surfaces at 8 kilometers, red and pink to show 4 kilometers high, yellow and orange to show roughly mean surface area, blue and green to show 4 kilometers below the mean, and dark purple and blues for low areas around 8 kilometers deep. Credit: NASA/Goddard 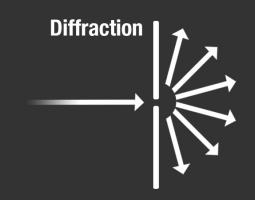 Figure 3.3.4. A diagram showing incoming energy as an arrow passing through a surface with a small opening. The energy diffracts and leaves the opening on the other side in multiple directions.

Diffraction is the bending and spreading of waves around an obstacle. It is most pronounced when a light wave strikes an object with a size comparable to its own wavelength. An instrument called a spectrometer uses diffraction to separate light into a range of wavelengths—a spectrum. In the case of visible light, the separation of wavelengths through diffraction results in a rainbow.

A spectrometer uses diffraction (and the subsequent interference) of light from slits or gratings to separate wavelengths. Faint peaks of energy at specific wavelengths can then be detected and recorded. A graph of these data is called a spectral signature. Patterns in a spectral signature help scientists identify the physical condition and composition of stellar and interstellar matter. 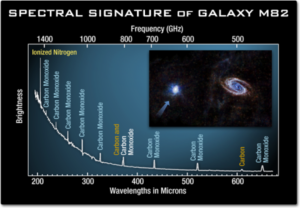 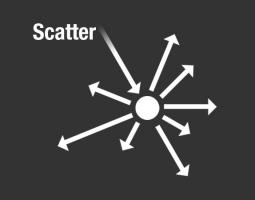 Figure 3.3.6. A diagram showing incoming energy as an arrow approaching a particle. The energy is scattered with arrows going in ALL directions.

Scattering occurs when light bounces off an object in a variety of directions. The amount of scattering that takes place depends on the wavelength of the light and the size and structure of the object.

The sky appears blue because of this scattering behavior. Light at shorter wavelengths—blue and violet—is scattered by nitrogen and oxygen as it passes through the atmosphere. Longer wavelengths of light—red and yellow—transmit through the atmosphere. This scattering of light at shorter wavelengths illuminates the skies with light from the blue and violet end of the visible spectrum. Even though violet is scattered more than blue, the sky looks blue to us because our eyes are more sensitive to blue light.

Aerosols in the atmosphere can also scatter light. NASA’s Cloud-Aerosol Lidar and Infrared Pathfinder Satellite Observation (CALIPSO) satellite can observe the scattering of laser pulses to “see” the distributions of aerosols from sources such as dust storms and forest fires. The image below shows a volcanic ash cloud drifting over Europe from an eruption of Iceland’s Eyjafjallajökull Volcano in 2010. 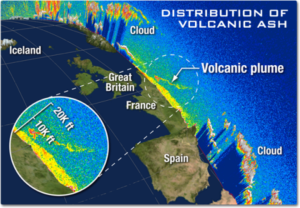 Figure 3.3.7. A view of western Europe showing the depth of the atmosphere and the cloud and aerosols. A wisp of ash from the Iceland volcano can been seen drifting over France. Credit: NASA/GSFC/LaRC/JPL, MISR Team

Refraction is when light waves change direction as they pass from one medium to another. Light travels slower in air than in a vacuum, and even slower in water. As light travels into a different medium, the change in speed bends the light. Different wavelengths of light are slowed at different rates, which causes them to bend at different angles.

Figure 3.3.8. This photo of a prism shows white light bending (or refracting) as it travels through the glass prism forming a rainbow.

For example, when the full spectrum of visible light travels through the glass of a prism, the wavelengths are separated into the colors of the rainbow.

How is absorption related to transmission?  If an object absorbs 70% of 530 nm light passing through it, then how much of the light is transmitted through the object?  Can you think of a mathematical way to express the relationship between absorption and transmission?