Process-oriented Guided Inquiry Learning (POGIL) is an active learning strategy that initially appeared in teaching chemistry courses (Farrell, Moog, & Spencer, 1999) and was later adopted widely in teaching and learning of science. It has the roots in a Piagetian model of learning, and has integrated the principles and concepts of inquiry-based learning and experiential learning cycles in science and laboratory education (Abdulwahed, & Nagy, 2009; Kolb, 2014; Piaget, 1964). POGIL has been proved effective in science learning (Freeman, Eddy, McDonough, Smith, Okoroafor, Jordt, & Wenderoth, 2014).

The core components of a POGIL lesson includes Scenarios and Models, Critical Thinking Questions (CTQ) or Key Questions, and Applications. In a laboratory-based learning environment, these components provide scaffolding for students to perform reflective observation, be able to reach abstract conceptualization, and apply the conceptual knowledge to actual operation, analysis, and synthesis. These happen with the concrete experiences, align with learning objectives, and are supported with learning materials. 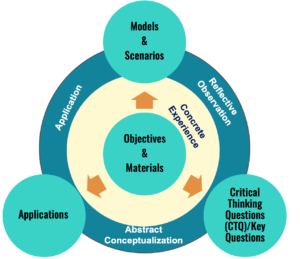 A POGIL Scenario sets the context and main theme for a learning activity. It is very similar to the Gaining Attention step in Gagne’s Conditions of Learning. An example of a Scenario can be:

“Thin sections are used for mineral identification, petrographic analysis to classify rocks, and textural analysis to describe how a rock is formed.” Now that you and your peer classmates were requested by a local mineral society to analyze a piece of chlorite schist.

Then the respective POGIL Model presents the instructional content in diverse formats. An example related to the above scenario is the following YouTube AmiGEO Channel playlist of the steps in preparing a thin section:

A key question can be: What are the core stages of preparing a thin section?

A self-assessment usually follows to help learning transfer. An example is:

In designing this book, we have followed the procedure as presented in the table below:

An Example POGIL on SERC:

Kolb, D. A. (2014). Experiential learning: Experience as the source of learning and development. FT press.