Breast milk is considered the ideal diet for newborns. It has the right amount of calories, fat, and protein to support overall physical and neurological development, it provides a source of iron more easily absorbed in the body than the iron found in dietary supplements, it provides a resistance against many diseases, it is more easily digested by infants than is formula, and it helps babies make a transition to solid foods more easily than if bottle fed. For all of these reasons, it is recommended that mothers breast feed their infants until at least 6 months of age and that breast milk be used in the diet throughout the first year (U.S. Department of Health and Human Services, 2004a in Berk, 2007).

However, most mothers who breastfeed in the United States stop breast feeding at about 6-8 weeks, often in order to return to work outside the home. Mothers can certainly continue to provide breast milk to their babies by expressing and freezing the milk to be bottle fed at a later time or by being available to their infants at feeding time, but some mothers find that after the initial encouragement they receive in the hospital to breast feed, the outside world is less supportive of such efforts. Some workplaces support breastfeeding mothers by providing flexible schedules and welcoming infants, but many do not. And the public support of breastfeeding is sometimes lacking. Women in Canada are more likely to breastfeed than are those in the United States and the Canadian health recommendation is for breastfeeding to continue until 2 years of age. Facilities in public places in Canada such as malls, ferries, and workplaces provide more support and comfort for the breastfeeding mother and child than found in the United States.

One early argument given to promote the practice of breastfeeding was that it promoted bonding and healthy emotional development for infants. However, this does not seem to be the case. Breastfed and bottle-fed infants adjust equally well emotionally (Ferguson and Woodward, 1999). This is good news for mothers who may be unable to breastfeed for a variety of reasons and for fathers who might feel left out as a result.

In addition to the nutritional benefits of breastfeeding, breast milk is free! Anyone who has priced formula recently can appreciate this added incentive to breastfeeding. Prices for a month’s worth of formula can easily range from $130-200. Breastfeeding also stimulates contractions in the uterus to help it regain its normal size. And women who breastfeed are more likely to space their pregnancies further apart.

An historic look at breastfeeding

The use of wet nurses, or lactating women hired to nurse others’ infants, during the middle ages eventually declined and mothers increasingly breastfed their own infants in the late 1800s. In the early part of the 20th century, breastfeeding began to go through another decline and by the 1950s, it was practiced less frequently by middle class, more affluent mothers as formula began to be viewed as superior to breast milk. In the late 1960s and 1970s, greater emphasis began to be placed on natural childbirth and breastfeeding and the benefits of breastfeeding were more widely publicized. Gradually rates of breastfeeding began to climb, particularly among middle-class educated mothers who received the strongest messages to breastfeed. Today, women receive consultation from lactation specialists before being discharged from the hospital to ensure that they are informed of the benefits of breastfeeding and given support and encouragement to get their infants to get used to taking the breast. This does not always happen immediately and first time mothers, especially, can become upset or discouraged. In this case, lactation specialists and nursing staff can encourage the mother to keep trying until baby and mother are comfortable with the feeding.

In the 1960s, formula companies led campaigns in developing countries to encourage mothers to feed their babies on infant formula. Many mothers felt that formula would be superior to breast milk and began using formula. The use of formula can certainly be healthy under conditions in which there is adequate, clean water with which to mix the formula and adequate means to sanitize bottles and nipples. However, in many of these countries such conditions were not available and babies often were given diluted, contaminated formula which made them become sick with diarrhea and become dehydrated. Rates of breast feeding declined in Peru from 90 percent to 10 percent in just 8 years time (Berger, 2001). These conditions continue today and now many hospitals prohibit the distribution of formula samples to new mothers in efforts to get them to rely on breast feeding. Many of these mothers do not understand the benefits of breast feeding and have to be encouraged and supported in order to promote this practice. Breast feeding could save the lives of millions of infants each year, according to the World Health Organization, yet fewer than 40 percent of infants are breastfed exclusively for the first 6 months of life. Find out more at the WHO’s 10 facts on breastfeeding. Most women can breastfeed unless they are receiving chemotherapy or radiation therapy, have HIV, are dependent on illicit drugs, or have active, untreated tuberculosis.

Children in developing countries and countries experiencing the harsh conditions of war are at risk for two major types of malnutrition. Infantile marasmus refers to starvation due to a lack of calories and protein. Children who do not receive adequate nutrition lose fat and muscle until their bodies can no longer function. Babies who are breast fed are much less at risk of malnutrition than those who are bottle fed. After weaning, children who have diets deficient in protein may experience kwashiorkor or the “disease of the displaced child” often occurring after another child has been born and taken over breastfeeding. This results in a loss of appetite and swelling of the abdomen as the body begins to break down the vital organs as a source of protein. 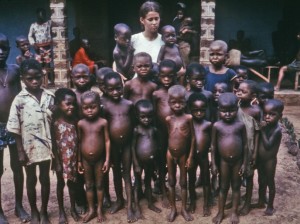 The benefits of breast milk are well-known and publicized. The collection and distribution of breast milk has become a million dollar industry supplying hospitals and others in need of the ideal diet. For more information, go to www.prolacta.com to see a current development in the story of breast milk.

Milk Anemia in the United States

About 9 million children in the United States are malnourished (Children’s Welfare, 1998). More still suffer from milk anemia, a condition in which milk consumption leads to a lack of iron in the diet. This can be due to the practice of giving toddlers milk as a pacifier-when resting, when riding, when waking, and so on. Appetite declines somewhat during toddlerhood and a small amount of milk (especially with added chocolate syrup) can easily satisfy a child’s appetite for many hours. The calcium in milk interferes with the absorption of iron in the diet as well. Many preschools and daycare centers give toddlers a drink after they have finished their meal in order to prevent spoiling their appetites.