Kubler-Ross’s work was introduced at a period in which the hospice movement began in the United States. This movement focused attention on caring for the dying. Palliative care focuses on providing comfort and relief from physical and emotional pain to patients throughout their illness even while being treated (NIH, 2007). Palliative care is part of hospice programs. Hospice involves caring for dying patients by helping them be as free from pain as possible, providing them with assistance to complete wills and other arrangements for their survivors, giving them social support through the psychological stages of loss, and helping family members cope with the dying process, grief, and bereavement. In order to enter hospice, a patient must be diagnosed as terminally ill with an anticipated death within 6 months. Most hospice care does not include medical treatment of disease or resuscitation although some programs administer curative care as well. The patient is allowed to go through the dying process without invasive treatments. Family members, who have agreed to put their loved one on hospice, may become anxious when the patient begins to experience the death. They may believe that feeding or breathing tubes will sustain life and want to change their decision. Hospice workers try to inform the family of what to expect and reassure them that much of what they see is a normal part of the dying process.

The early hospices established were independently operated and dedicated to giving patients as much control over their own death process as possible. Today, there are more than 4,000 hospice programs and over 1,000 of them are offered through hospitals. Hospice care was given to over 1 million patients in 2004 (NIH, 2007; Senior Journal, 2007). Although hospice care has become more widespread, these new programs are subjected to more rigorous insurance guidelines that dictate the types and amounts of medications used, length of stay, and types of patients who are eligible to receive hospice care (Weitz, 2007). Thus, more patients are being served, but providers have less control over the services they provide, and lengths of stay are more limited. Patients receive palliative care in hospitals and in their homes.

The majority of patients on hospice are cancer patients and typically do not enter hospice until the last few weeks prior to death. The average length of stay is less than 30 days and many patients are on hospice for less than a week (National Center for Health Statistics, 2003). Medications are rubbed into the skin or given in drop form under the tongue to relieve the discomfort of swallowing pills or receiving injections. A hospice care team includes a chaplain as well as nurses and grief counselors to assist spiritual needs in addition to physical ones. When hospice is administered at home, family members may also be part, and sometimes the biggest part, of the care team. Certainly, being in familiar surroundings is preferable to dying in an unfamiliar place. But about 60 to 70 percent of people die in hospitals and another 16 percent die in institutions such as nursing homes (APA Online, 2001). Most hospice programs serve people over 65; few programs are available for terminally ill children (Wolfe et al., in Berger, 2005). 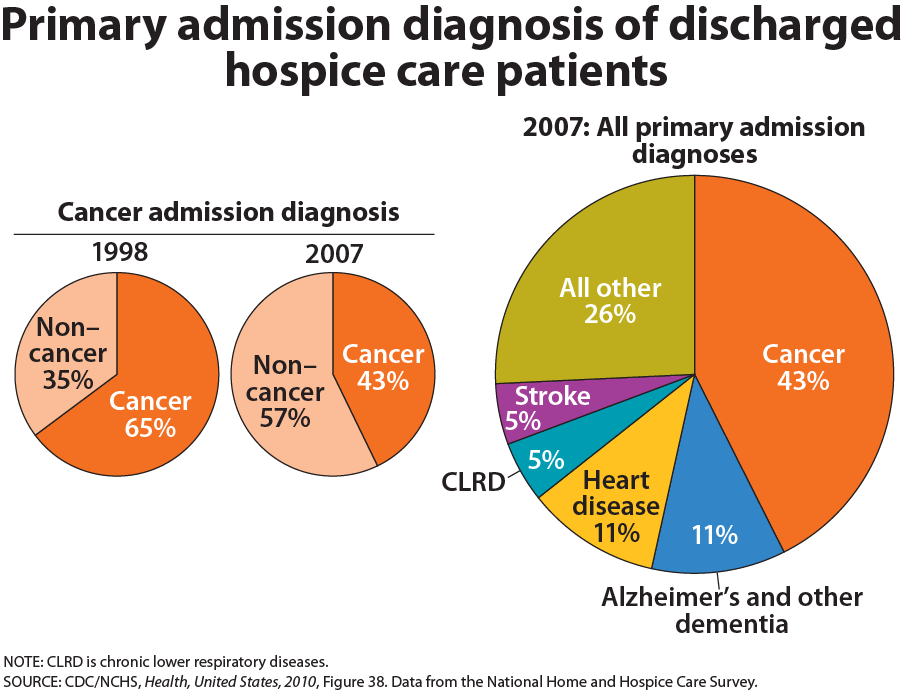 Dame Cicely Saunders founded the hospice movement in Great Britain and described the kinds of pain experienced by those who are dying and their families. These 7 Pains include emotional include physical pain, spiritual pain, intellectual pain, emotional pain, interpersonal pain, financial pain and bureaucratic pain. Hospice care focuses on alleviating physical pain and providing spiritual guidance. Those suffering from Alzheimer’s also experience intellectual pain and frustration as they lose their ability to remember and recognize others. Depression, anger, and frustration are elements of emotional pain, and family members can have tensions that a social worker or clergy member may be able to help resolve. Many patients are concerned with the financial burden their care will create for family members. And bureaucratic pain is also suffered while trying to submit bills and get information about health care benefits or to complete requirements for other legal matters. All of these concerns can be addressed by hospice care teams. Learn more about Saunders in the link provided at the end of this lesson.

The Hospice Foundation of America notes that not all racial and ethnic groups feel the same way about hospice care. African-American families may believe that medical treatment should be pursued on behalf of an ill relative as long as possible and that only God can decide when a person dies. Chinese-American families may feel very uncomfortable discussing issues of death or being near the deceased family member’s body. The view that hospice care should always be used is not held by everyone and health care providers need to be sensitive to the wishes and beliefs of those they serve (Hospital Foundation of America, 2009).