What do we think?

Cognitive theories focus on how our mental processes or cognitions change over time. We will examine the ideas of two cognitive theorists: Jean Piaget and Lev Vygotsky.

Piaget: Changes in thought with maturation 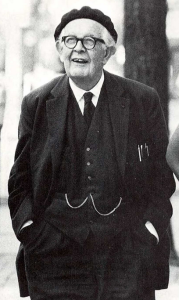 Jean Piaget (1896-1980) is one of the most influential cognitive theorists in development inspired to explore children’s ability to think and reason by watching his own children’s development. He was one of the first to recognize and map out the ways in which children’s intelligence differs from that of adults. He became interested in this area when he was asked to test the IQ of children and began to notice that there was a pattern in their wrong answers! He believed that children’s intellectual skills change over time that that maturation rather than training brings about that change. Children of differing ages interpret the world differently.

Making sense of the world

Piaget believed that we are continuously trying to maintain cognitive equilibrium or a balance or cohesiveness in what we see and what we know. Children have much more of a challenge in maintaining this balance because they are constantly being confronted with new situations, new words, new objects, etc. When faced with something new, a child may either fit it into an existing framework (schema) and match it with something known (assimilation) such as calling all animals with four legs “doggies” because he or she knows the word doggie, or expand the framework of knowledge to accommodate the new situation (accommodation) by learning a new word to more accurately name the animal. This is the underlying dynamic in our own cognition. Even as adults we continue to try and “make sense” of new situations by determining whether they fit into our old way of thinking or whether we need to modify our thoughts.

Piaget outlined four major stages of cognitive development. Let me briefly mention them here. We will discuss them in detail throughout the course.For about the first two years of life, the child experiences the world primarily through their senses and motor skills. Piaget referred to this type of intelligence as sensorimotor intelligence. During the preschool years, the child begins to master the use of symbols or words and is able to think of the world symbolically but not yet logically. This stage is the preoperational stage of development. The concrete operational stage in middle childhood is marked by an ability to use logic in understanding the physical world. In the final stage, the formal operational stage the adolescent learns to think abstractly and to use logic in both concrete and abstract ways.

Piaget has been criticized for overemphasizing the role that physical maturation plays in cognitive development and in underestimating the role that culture and interaction (or experience) plays in cognitive development. Looking across cultures reveals considerable variation in what children are able to do at various ages. Piaget may have underestimated what children are capable of given the right circumstances.

Vygotsky: Changes in thought with guidance

Lev Vygotsky (1896-1934) was a Russian psychologist who wrote in the early 1900s but whose work was discovered in the United States in the 1960s but became more widely known in the 1980s. Vygotsky differed with Piaget in that he believed that a person not only has a set of abilities, but also a set of potential abilities that can be realized if given the proper guidance from others. His sociocultural theory emphasizes the importance of culture and interaction in the development of cognitive abilities. He believed that through guided participation known as scaffolding, with a teacher or capable peer, a child can learn cognitive skills within a certain range known as the zone of proximal development. Have you ever taught a child to perform a task? Maybe it was brushing their teeth or preparing food. Chances are you spoke to them and described what you were doing while you demonstrated the skill and let them work along with you all through the process. You gave them assistance when they seemed to need it, but once they knew what to do-you stood back and let them go. This is scaffolding and can be seen demonstrated throughout the world. This approach to teaching has also been adopted by educators. Rather than assessing students on what they are doing, they should be understood in terms of what they are capable of doing with the proper guidance. You can see how Vygotsky would be very popular with modern day educators. We will discuss Vygotsky in greater depth in upcoming lessons.

Putting it all together: Ecological Systems Model

Urie Brofenbrenner (1917-2005) provides a model of human development that addresses its many influences. Brofenbrenner recognized that human interaction is influenced by larger social forces and that an understanding of those forces is essential for understanding an individual. The individual is impacted by microsystems such as parents or siblings; those who have direct, significant contact with the person. The input of those is modified by the cognitive and biological state of the individual as well. And these influence the person’s actions which in turn influence systems operating on him or her. The mesosystem includes larger organizational structures such as school, the family, or religion. These institutions impact the microsystems just described. For example, the religious teachings and traditions may guide the child’s family’s actions or create a climate that makes the family feel stigmatized and this indirectly impacts the child’s view of self and others. The philosophy of the school system, daily routine, assessment methods, and other characteristics can affect the child’s self-image, growth, sense of accomplishment, and schedule thereby impacting the child, physically, cognitively, and emotionally. These mesosystems both influence and are influenced by the larger contexts of community referred to as the exosystem. A community’s values, history, and economy can impact the organizational structures it houses. And the community is influenced by macrosystems which are cultural elements such as global economic conditions, war, technological trends, values, philosophies, and a society’s responses to the global community. In sum, a child’s experiences are shaped by larger forces such as the family, schools, and religion, and culture. All of this occurs in an historical context or chronosystem. Bronfenbrenner’s model helps us combine each of the other theories described above and gives us a perspective that brings it all together.