Iconography was developed by art historian Erwin Panofsky, as a means of expanding beyond formal analysis, and focusing on analyzing subject matter in artwork, specifically symbols whose meaning is understood by a people or culture in that specific time (Rose 202, Sayre 32). For example, in the Western world we are familiar with what a Buddha statue looks like, but most Western people likely have no idea that the position of the hands in the statue carries symbolic meaning (Sayre 33). If you are a Buddhist however, you would read a specific meaning into the hand gesture and position. Symbolic meanings in artwork may also be lost over time even within the culture that created them (Sayre 35). 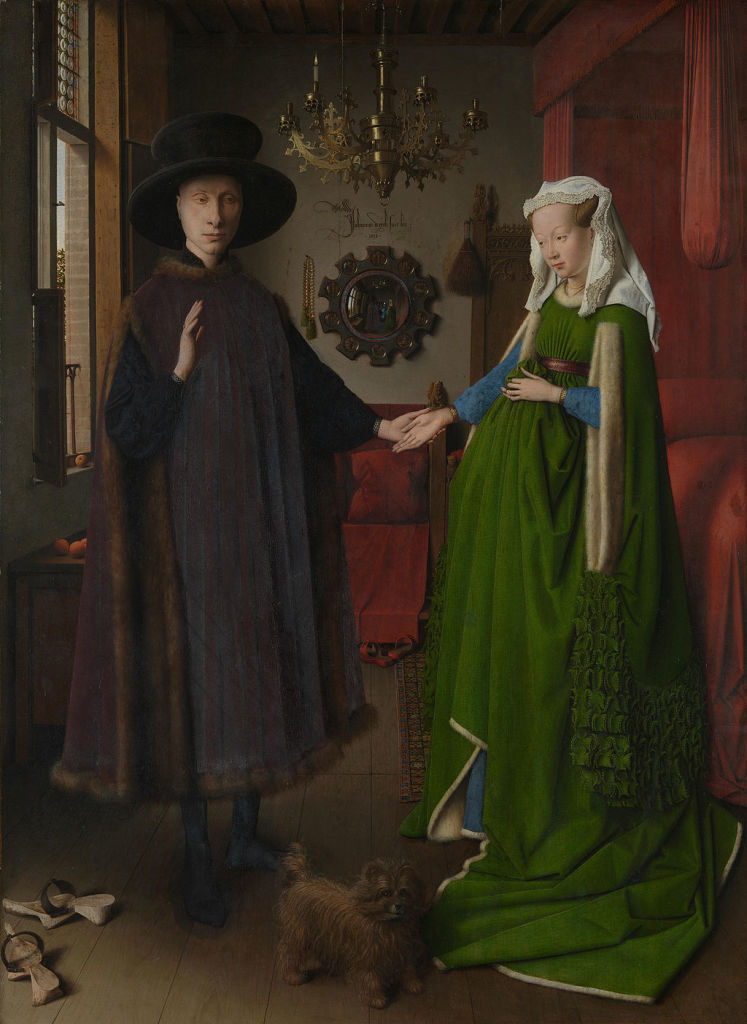 Jan van Eyck’s painting, Giovanni Arnolfini and his wife Giovanna Cenami, from 1434, is often used as a prototype example for iconographic analysis, and the conflicts that arise within it. As a painter, Van Eyck was revered for his incredible ability to mimic realism and the effects of light. The painting’s many symbols, some of Christian origin, have been a source of some debate. It was widely accepted as a painting representing a marriage, but recent controversy suggests it is more a record of engagement than a wedding portrait. In van Eyck’s time, a woman laying her hands in the palm of a male, as she so conspicuously does in the painting, was understood to be an agreement to wed (Sayre 35). Above the mirror in the center of the background are the words “Jan van Eyck has been here, 1434.” To contemporary ears this almost sounds like a bit of playful graffiti, but it also clearly establishes the painter as a witness to the event being painted (Sayre 35).

Iconography shares similarities to semiotics in interpreting signs (in semiotics signs can be symbols) on both a denotive and connotative level. Iconography is typically used in analyzing works from the past, as Gillian Rose notes, typically Western figurative images from the 16th through 18th centuries (202). While semiotics is more often used to analyze more contemporary visual culture, like advertising.

Artists continue to use symbolic visual language. Though artist Jean-Michele Basquiat’s life and career were tragically cut short by a drug overdose, he developed a rich vocabulary of symbolism that mixed private and public meanings. Using his neo-expressionist style he drew inspiration from prominent African Americans, such as Dizzy Gillespie, Muhammad Ali, and Sugar Ray Robinson (Rosenberg). As Sayre points out, central to his personal iconography was a three pointed crown, a symbol he related to himself, but also his African American heroes (37). He was familiar with the Symbol Sourcebook: An Authoritative Guide to International Graphic Symbols, by Henry Dreyfuss, and was drawn to the section on “hobo signs,” in particular the “X” which within the hobo culture was a signal that a place was okay (Sayre 37). Of course, the ‘X’ is a common symbol with multiple meanings. An “X” could be used to mark a spot and constitute its importance, or in essence, to eliminate something by crossing it out. And, according to Sayre, this is often the difficult and ambiguous position Basquiat’s African American heroes found themselves in, in 20th century America (37). In his 1982 painting Charles the First, Charles is a reference to both Charlie Parker and Charles I of England, who was beheaded by Protestants (Sayre 37). Included in the painting is the text, “Most kings get their head cut off.”

The formalism you practiced in module two is focused on compositional analysis by being descriptive. Semiotics offers another way of analyzing images, be they found in artwork or another type of visual culture, like advertising. Semiotics is the study of signs. In semiotics the basic unit is the sign. Signs are representations that have meanings beyond what they literally represent. Signs can come in visual or auditory form- as in language or sounds. Signs are everywhere, not just in art. Semiotics offers a way to break an image into its constituent parts- its signs, and trace how they relate to each other, and other systems of meaning (Rose 105).

A short video on Semiotics and the Icon/Index/Symbol distinctions:

Another example of a symbol is the American flag. If you were raised in America, you are taught that it stands for the country America and national pride, and possibly other meanings like freedom, but how the flag looks is arbitrary. It could just as easily have taken on some other graphic representation, and still have been coded with those meanings, just like the flags of other countries share a similar national significance in those other cultures.

Signs can have denotative, or literal meaning, and connotative meanings that are in addition to their literal meaning. Signs exist in relationship to other signs. Signs also connect to wider systems of meaning that are conventionalized meanings shared by particular groups of people or cultures (Rose 128). This is referred to as codes. Because signs can often be polysemic, or have multiples meanings, unpacking their meanings fully can be very complex. It is accepted, however, that within specific groups/cultures, and particular times, there are often preferred or dominant readings of signs that are interpreted in ways intended to retain the institutional/political/idealogical order imprinted on them for that time (Rose 133).

Advertisers make design choices with transference in mind. They intend for specific meanings to be transferred from one sign to another. Think of how often you have seen a new car ad where the car and some kind sexualized representation of a woman are paired together. What is the intended transference of meaning between these two signs, the car and the woman? Consider how focus groups are used to figure out what will be the most effective tactic to use in selling a product to the target consumer. Focus groups are a way of researching the target consumer’s codes. What signs will they pay attention to and interpret in such a way that will ultimately manufacture desire for that product?

Consider these questions in relation to this 2009 Levis Ad for their “Go Forth” campaign directed by Cary Fukunaga for Portland’s Weiden+Kennedy Advertising Agency.

Styles of dress are kinds of signs. In Western culture we consider the suit to be a visual signal for business. In connection, people who work in white collar jobs are sometimes referred to informally as “suits.” In the ad there is a man in a suit, presumably a white collar worker. We might infer by other signs like the limousine that he is wealthy or powerful. How does the treatment of the man in the suit compare with the other figures who appear in the ad? The neon sign of the word “America” is partially submerged. What does this signify? Through out the ad their are loud banging sounds. What do these auditory signs signify? Considering the signs in this ad, what do you think Levi’s wants you to associate with their brand and products?