Reading: How to Read a Statute

Statutes are the laws of a state as enacted by the legislature and approved by, or allowed to take effect without approval of, the governor. Bills, the legislative documents used to pass or amend laws, are read in the context of existing statutes. Understanding existing law and how it is affected by a bill is fundamental to reading and understanding a bill. With a basic understanding of how to read the statutes, you will be better prepared to read and understand a bill.

Each bill passed by the legislature and not vetoed by the governor becomes effective according to the terms outlined in the bill or general effective date provisions in the state constitution. Once effective, the text of the bill becomes law. Such law can be found in the 27 codes that are organized by topic, Vernon’s Texas Civil Statutes, or the session laws.

Texas has revised its statutes four times: 1879, 1895, 1911, and 1925. The 1925 revision organized the statutes into a unified code. Each statute was titled and assigned a sequence article number that corresponded with its alphabetized title. This organization was published and bound in black volumes known as Vernon’s Texas Civil Statutes by the same third-party publisher used today—West.

Subsequent additions to the law were incorporated into the organization established in 1925. To maintain the integrity of the statutes’ numerical and alphabetical organization, West often added letters to the end of article designations for new laws relating to the same subject matter.

Before long the statutes had become unwieldy and illogical in their numbering and organization. In 1963, the legislature charged the Texas Legislative Council with conducting an ongoing nonsubstantive revision of the 1925 statutes. Under the revision program, the statutes are arranged into topical codes (e.g., Family Code or Health and Safety Code) and numbered using a system that accommodates future expansion of the law. In addition, the revision eliminates repealed, invalid, and duplicative provisions. The few 1925 statutes that have not been incorporated into a code may be found in Vernon’s Texas Civil Statutes.

In contrast, certain bills enact new law without reference to a code or civil statute section. These laws can be found only in the session law volumes, which are published and bound by West as the General and Special Laws. After a bill is signed by the governor or the governor allows the bill to become law without a signature, it is assigned a chapter number that corresponds with the order in which the bill is fi led with the secretary of state. The session law volumes are organized by chapter number. This chapter designation is often used to identify a specific bill from a specific session, such as Chapter 981 (H.B. 1125), Acts of the 74th Legislature, Regular Session, 1995. However, most bills amend codes or the uncodified civil statutes, and the changes they make are incorporated into the appropriate code or Vernon’s Texas Civil Statutes.

West publishes the printed sources for the statutes—the Vernon’s Texas Civil Statutes (for those laws yet to be codified) and the Vernon’s Texas Codes Annotated. The Vernon’s volumes contain pocket parts, which are temporary additions to each volume that reflect changes in the statutes that have occurred since the hardbound volume was last published. Pocket parts are found in the back of the appropriate hardbound volume. The statutes are most easily accessed online via the Texas Constitution and Statutes website, which is maintained by Texas Legislative Council staff and regularly updated and corrected.

How Codes and Statutes Are Organized 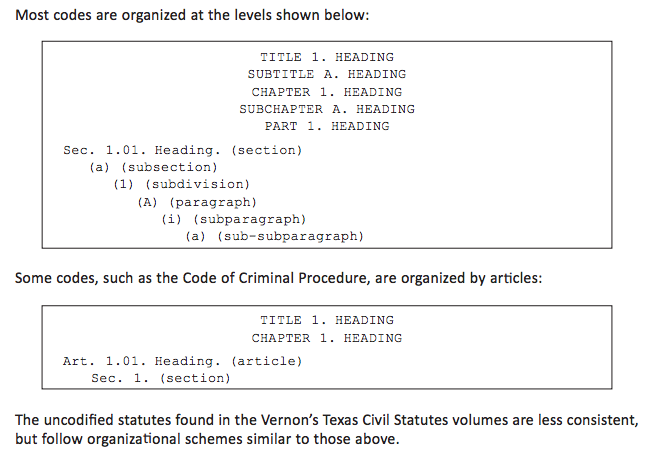 How to Read a Statute

Many statutes are straighƞ orward and easily understood. Others are complicated and difficult to comprehend. Often the difficulty is because of the way the statute is constructed rather than because of the complexity of the subject matter. Long, complex sentences, numerous cross-references, dependent subdivisions, and phrases that except application of the statute can make the meaning difficult to follow. 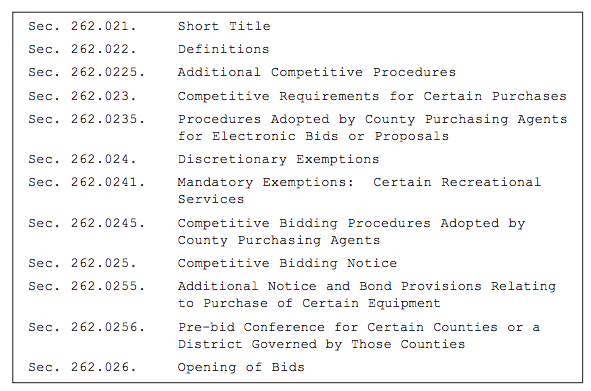