When learning new vocabulary and processes it often takes more than a careful reading of the text to gain understanding. Remember to use flashcards for vocabulary, writing the answers out by hand before checking to see if you have them right. When learning new processes, writing them out by hand as you read through them will help you simultaneously memorize and gain insight into the process.

Pro-tip: Write out each of the examples in this section using paper and pencil, trying each of the steps as you go, until you feel you could explain it to another person.

Borda Count is another voting method, named for Jean-Charles de Borda, who developed the system in 1770.

In this method, points are assigned to candidates based on their ranking; 1 point for last choice, 2 points for second-to-last choice, and so on. The point values for all ballots are totaled, and the candidate with the largest point total is the winner.

A group of mathematicians are getting together for a conference. The members are coming from four cities: Seattle, Tacoma, Puyallup, and Olympia. Their approximate locations on a map are shown below. 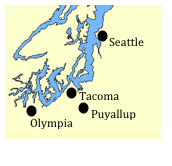 The votes for where to hold the conference were:

Use the Borda count method to determine the winning town for the conference.

In each of the 51 ballots ranking Seattle first, Puyallup will be given 1 point, Olympia 2 points, Tacoma 3 points, and Seattle 4 points. Multiplying the points per vote times the number of votes allows us to calculate points awarded

Adding up the points:

Under the Borda Count method, Tacoma is the winner of this vote.

Here is a video showing the example from above.

Consider again the election from earlier. Find the winner using Borda Count. Since we have some incomplete preference ballots, for simplicity, give every unranked candidate 1 point, the points they would normally get for last place.

We give 1 point for 3rd place, 2 points for 2nd place, and 3 points for 1st place. In the columns where voters only listed first place choice, the same number of votes are awarded to each of the other candidates as 3rd place vote multipliers

McCarthy would be the winner using Borda Count.

You might have already noticed one potential flaw of the Borda Count from the previous example. In that example, Seattle had a majority of first-choice votes, yet lost the election! This seems odd, and prompts our next fairness criterion:

If a choice has a majority of first-place votes, that choice should be the winner.

The election from the previous example using the Borda Count violates the Majority Criterion. Notice also that this automatically means that the Condorcet Criterion will also be violated, as Seattle would have been preferred by 51% of voters in any head-to-head comparison.

Borda count is sometimes described as a consensus-based voting system, since it can sometimes choose a more broadly acceptable option over the one with majority support. In the example above, Tacoma is probably the best compromise location. This is a different approach than plurality and instant runoff voting that focus on first-choice votes; Borda Count considers every voter’s entire ranking to determine the outcome.

Because of this consensus behavior, Borda Count, or some variation of it, is commonly used in awarding sports awards. Variations are used to determine the Most Valuable Player in baseball, to rank teams in NCAA sports, and to award the Heisman trophy.