a note about logical fallacies

The ideas sampled on this page are classic and are often found in irresponsible advertising, politics, and in social media. A good way to understand them is to see as many examples of them in the world as you can.

Look at social media arguments that appeal to emotion and sentiment. Political candidates, too,  sometimes employ one or more of these to favorably manipulate situation.

“Jane says that whales aren’t fish, but she’s only in the second grade, so she can’t be right.”

Here the argument is attacking Jane, not the validity of her claim, so this is an ad hominem argument.

“Jane says that whales aren’t fish, but everyone knows that they’re really mammals—she’s so stupid.”

Show Solution
This certainly isn’t very nice, but it is not ad hominem since a valid counterargument is made along with the personal insult.

This type of argument assumes something it true because it hasn’t been proven false.

“Nobody has proven that photo isn’t Bigfoot, so it must be Bigfoot.”

These arguments attempt to use the authority of a person to prove a claim. While often authority can provide strength to an argument, problems can occur when the person’s opinion is not shared by other experts, or when the authority is irrelevant to the claim.

“A diet high in bacon can be healthy – Doctor Atkins said so.”

Show Solution
Here, an appeal to the authority of a doctor is used for the argument. This generally would provide strength to the argument, except that the opinion that eating a diet high in saturated fat runs counter to general medical opinion. More supporting evidence would be needed to justify this claim.

“Jennifer Hudson lost weight with Weight Watchers, so their program must work.”

Here, there is an appeal to the authority of a celebrity. While her experience does provide evidence, it provides no more than any other person’s experience would.

An appeal to consequence concludes that a premise is true or false based on whether the consequences are desirable or not.

“Humans will travel faster than light: faster-than-light travel would be beneficial for space travel.”

A false dilemma argument falsely frames an argument as an “either or” choice, without allowing for additional options.

“Either those lights in the sky were an airplane or aliens. There are no airplanes scheduled for tonight, so it must be aliens.”

This argument ignores the possibility that the lights could be something other than an airplane or aliens.

Circular reasoning is an argument that relies on the conclusion being true for the premise to be true.

“I shouldn’t have gotten a C in that class; I’m an A student!”

A straw man argument involves misrepresenting the argument in a less favorable way to make it easier to attack.

“Senator Jones has proposed reducing military funding by 10%. Apparently he wants to leave us defenseless against attacks by terrorists”

Here the arguer has represented a 10% funding cut as equivalent to leaving us defenseless, making it easier to attack.

A post hoc argument claims that because two things happened sequentially, then the first must have caused the second.

“Today I wore a red shirt, and my football team won! I need to wear a red shirt everytime they play to make sure they keep winning.”

Similar to post hoc, but without the requirement of sequence, this fallacy assumes that just because two things are related one must have caused the other. Often there is a third variable not considered.

“Months with high ice cream sales also have a high rate of deaths by drowning. Therefore ice cream must be causing people to drown.”

This argument is implying a causal relation, when really both are more likely dependent on the weather; that ice cream and drowning are both more likely during warm summer months.

Identify the logical fallacy in each of the arguments

2. Since no cows are purple, we know there is no overlap between the set of cows and the set of purple things. We know Fido is not in the cow set, but that is not enough to conclude that Fido is in the purple things set. 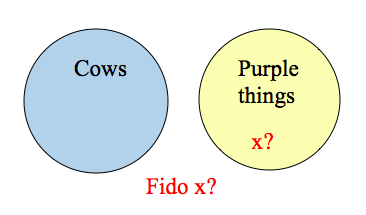 3. Let S: have a shovel, D: dig a hole. The first premise is equivalent to [latex]S{\rightarrow}D[/latex]. The second premise is D. The conclusion is S.

This is not a tautology, so this is an invalid argument.

4. Letting P = go to the party, T = being tired, and F = seeing friends, then we can represent this argument as P:

We could rewrite the second premise using the contrapositive to state [latex]{\sim}F{\rightarrow}{\sim}P[/latex], but that does not allow us to form a syllogism. If we don’t see friends, then we didn’t go the party, but that is not sufficient to claim I won’t be tired tomorrow. Maybe I stayed up all night watching movies.