Solve an algebraic equation using the addition property of equality 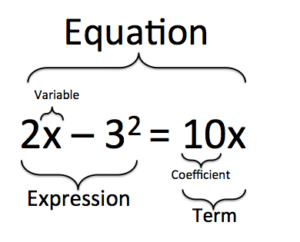 Using the Addition Property of Equality

An important property of equations is one that states that you can add the same quantity to both sides of an equation and still maintain an equivalent equation. Sometimes people refer to this as keeping the equation “balanced.” If you think of an equation as being like a balance scale, the quantities on each side of the equation are equal, or balanced.

Let’s look at a simple numeric equation, [latex]3+7=10[/latex], to explore the idea of an equation as being balanced. 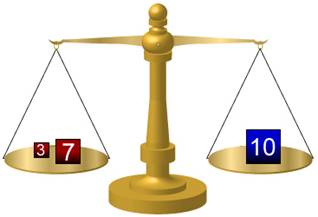 The expressions on each side of the equal sign are equal, so you can add the same value to each side and maintain the equality. Let’s see what happens when 5 is added to each side.

Since each expression is equal to 15, you can see that adding 5 to each side of the original equation resulted in a true equation. The equation is still “balanced.”

On the other hand, let’s look at what would happen if you added 5 to only one side of the equation.

If two expressions are equal to each other, and you add the same value to both sides of the equation, the equation will remain equal.

When the equation involves addition or subtraction, use the inverse operation to “undo” the operation in order to isolate the variable. For addition and subtraction, your goal is to change any value being added or subtracted to 0, the additive identity.

In the following simulation, you can adjust the quantity being added or subtracted to each side of an equation to see how important it is to perform the same operation on both sides of an equation when you are solving.

This equation means that if you begin with some unknown number, x, and subtract 6, you will end up with 8. You are trying to figure out the value of the variable x.

Using the Addition Property of Equality, add 6 to both sides of the equation to isolate the variable. You choose to add 6 because 6 is being subtracted from the variable.

This equation means that if you begin with some unknown number, x, and add 5, you will end up with 27. You are trying to figure out the value of the variable x.

Using the Addition Property of Equality, subtract 5 from both sides of the equation to isolate the variable. You choose to subtract 5, as 5 is being added from the variable.

In the following video two examples of using the addition property of equality are shown.

Since 10 is being added to the variable, subtract 10 from both sides. Note that subtracting 10 is the same as adding [latex]–10[/latex].

To check, substitute the solution, [latex]–75[/latex] for x in the original equation, then simplify.

This equation is true, so the solution is correct.

Since 4 is being subtracted from the variable, add 4 to both sides.

To check, substitute the solution, [latex]–28[/latex] for x in the original equation, then simplify.

This equation is true, so the solution is correct.

It is always a good idea to check your answer whether you are requested to or not.

The following video presents two examples of using the addition property of equality when there are negative integers in the equation.

Can you determine what you would do differently if you were asked to solve equations like these?

What makes this example different than the previous ones? Use the box below to write down a few thoughts about how you would solve this equation with decimals.

Show Solution
To solve this equation you need to remember how to add or subtract decimal numbers. You also need to remember that when you subtract a number from a negative number, your result will be negative.

To add two numbers of the same sign, first add their absolute values:

b) Solve [latex]\frac{1}{4} + y = 3[/latex]. What makes this example different than the previous ones? Use the box below to write down a few thoughts about how you would solve this equation with a fraction.

In the following video, two examples of using the addition property of equality with decimal numbers are shown.

The next video shows how to use the addition property of equality to solve equations with fractions.

The examples above are sometimes called one-step equations because they require only one step to solve. In these examples, you either added or subtracted a constant from both sides of the equation to isolate the variable and solve the equation.

Writing and solving algebraic equations is an important part of mathematics. Equations can be used to describe economic, cultural, physical, and biological processes. They help business people make decisions, and help doctors and scientists find ways to heal and help people. Without mathematical equations we would not have the physical infrastructure that rely on every day for transportation and clean water.

Equations can help you model situations and solve problems in which quantities are unknown (like how long Joan should wait before she drives home). The simplest type of algebraic equation is a linear equation that has just one variable.

When you follow the steps to solve an equation, you try to isolate the variable. The variable is a quantity we don’t know yet. You have a solution when you get the equation x = some value.

For example, [latex]−4[/latex] and 4 both have an absolute value of 4 because they are each 4 units from 0 on a number line—though they are located in opposite directions from 0 on the number line.

This equation is read “the absolute value of x is equal to five.” The solution is the value(s) that are five units away from 0 on a number line.

Solving Equations of the Form [latex]|x|=a[/latex]

For any positive number a, the solution of [latex]\left|x\right|=a[/latex] is

x can be a single variable or any algebraic expression.

You can solve a more complex absolute value problem in a similar fashion.

You can check these two solutions in the absolute value equation to see if [latex]x=10[/latex] and [latex]x=−20[/latex] are correct.

This characteristic of equations is generalized in the multiplication property of equality.

If two expressions are equal to each other and you multiply both sides by the same number, the resulting expressions will also be equivalent.

Solve [latex]3x=24[/latex]. When you are done, check your solution.

Show Solution
Divide both sides of the equation by 3 to isolate the variable (have a coefficient of 1). Dividing by 3 is the same as having multiplied by [latex] \frac{1}{3}[/latex].

Check by substituting your solution, 8, for the variable in the original equation.

The solution is correct!

Show Solution
The only difference between this and the previous example is that the coefficient on x is a fraction. In the last example we used the reciprocal of 3 to isolate the x (disguised as division). Now we can use the reciprocal of [latex]\frac{1}{2}[/latex], which is 2.

Multiply both sides by 2:

In the video below you will see examples of how to use the multiplication property of equality to solve one-step equations with integers and fractions.

In the next example, we will solve a one-step equation using the multiplication property of equality. You will see that the variable is part of a fraction in the given equation, and using the multiplication property of equality allows us to remove the variable from the fraction. Remember that fractions imply division, so you can think of this as the variable k is being divided by 10. To “undo” the division, you can use multiplication to isolate k. Lastly, note that there is a negative term in the equation, so it will be important to think about the sign of each term as you work through the problem. Stop after each step you take to make sure all the terms have the correct sign.

Show Solution
We want to isolate the k, which is being divided by 10. The first thing we should do is multiply both sides by 10.

We write the k on the left side as a matter of convention.

In the following video you will see examples of using the multiplication property of equality to solve a one-step equation involving negative fractions.

Remember that absolute value refers to the distance from zero. You can use the same technique of first isolating the absolute value, then setting up and solving two equations to solve an absolute value equation involving multiplication.

This equation asks you to find what number times 2 has an absolute value of 6.

Solving the two equations you get

You can check these two solutions in the absolute value equation to see if [latex]x=3[/latex] and [latex]x=−3[/latex] are correct.

First, isolate the absolute value term by multiplying by the inverse of [latex] \displaystyle\frac{1}{3}[/latex]:

Apply the definition of absolute value:

You can check these two solutions in the absolute value equation to see if [latex]x=36[/latex] and [latex]x=−36[/latex] are correct.

In the following video you will see two examples of how to solve an absolute value equation, one with integers and one with fractions.